Normally it is possible to argue with an inside dust jacket quote, but in this case, it’s improbable.

“Spy Sinker is the crescendo climax of the six previous bestselling novels by Len Deighton–and it ties them all together.”

Spy Sinker is the culmination of the six previous novels, but it’s so much more than that. In a way, Berlin Game, Mexico Set, London Match, Winter, Spy Hook, and Spy Line are the dots plotted on a graph in the Bernard Samson Universe that Len Deighton has crafted, and Spy Sinker connects them all.

Any hunches, inklings, or thoughts that weren’t concrete from Spy Hook and/or Spy Line are laid bare with the other side of the coin in Sinker. It is very much a behind-the-curtain look at the story up to a point.

Yet, there is still one curious piece to this novel. For a book franchise, which is what this is part of, and Sinker’s Samson-adjacent plot, Bernard Samson is not the focal point of Sinker. We, as the readers, however, do learn an awful lot about our otherwise leading man from the other characters in this world. It’s as if everything you came to know of Bernard and his world from the previous books in the franchise was still not enough.

So what have we learned about Samson from those around him?

His wife thought that “as Chandler said, ‘Down these mean streets a man must go who is not himself mean, who is neither tarnished nor afraid. . . . Complete man, common man, and yet an unusual man,’ Bernard Samson was such a man.” 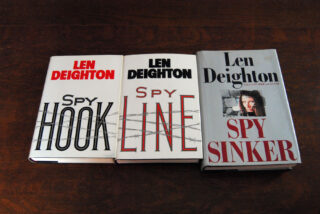 Those who he reported to thought that “Bernard’s arrogance comes from something inside him, some vitality, force, and a seemingly inexhaustible fund of courage. Our great universities will never be able to furnish inner strength, no one can. What teachers provide is always superimposed on the person that already exists. Education is a carapace, a cloud laid on the soul, a protection, a coloration or something to hide inside.”

Plus there’s this: “Bernard Samson could be an amusing companion when he was in a good mood. His caustic comments on his superiors, the government, and indeed the world around him were partly his defense against a system that had never given him a proper chance, but they sometimes contained more than a grain of truth. Bernard’s reputation was of being lucky, but his luck came from a professional attitude and a lot of hard work. Bernard was a tough guy…”

While readers learn more about this fictional main character that they’ve come to know over seven books, there remain universal truths in this fictional world that relate to our own, and will always be timeless in espionage and life.

There’s also the piece about depression which I find all too authentic, as Deighton writes that depression is “no respecter of logical truth; it was some dark chemical cloud that descended on her at random and reduced her to jelly.”

If you have picked up the Samson books, I suggest you continue the journey. If, after all of my praise, you still haven’t started, what are you waiting for?

An important note on that, if I may take a moment. At the beginning of Sinker, Deighton writes where each of the six books preceding this one, and this one as well, fall into the timeline. After that he writes, “The stories can be read in any order, and each one is complete in itself.”

While I agree that “each one is complete in itself,” I don’t suggest that you pick and choose your first experience of the series. However, I feel that way about Star Wars, the Marvel Cinematic Universe, and anything else with a fungible timeline.

Personally, I find greater value in consuming, at least for the first time, things as they were published, released, made available, etc., because I feel that subsequent items in the series are inherently biased towards knowledge that should have been gained from those that came first.

I can’t sit here at my keyboard and call the master of his craft Len Deighton wrong. I would just suggest that if you have the ability that you start from the beginning. It’s what I’ve done and it’s been a thrilling ride so far. If you revisit these in a different order for a different experience, that could be a very intriguing proposition.

Whether it is your first time, seventh, or hundredth spectacular trip with Samson, regardless of the order you read them in, happy reading!

Read the Secret File of technical information and quotes from Spy Sinker.

The path of life shall lead upwards for you.
Even a broken clock is right two times a day.
Even the greatest of whales is helpless in the middle of a desert.
More Fortunes >