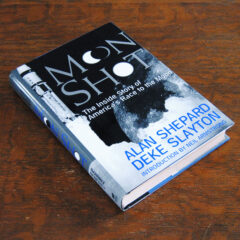 Moon Shot: The Inside Story of America’s Race to the Moon is a lovingly written history of America’s journey from the ground to the Moon. It’s written by two of the original Mercury astronauts Alan Shepard and Deke Slayton and two of the most respected aerospace journalists of the Apollo era Jay Barbree and Howard Benedict.

As an all-encompassing book of the golden-era of NASA – Mercury, Gemini, and Apollo, plus what was happening in Russia, and at times in the halls of the U.S. Congress – this is as complete a telling of the race for the Moon as you will get in one single volume.

As a space geek myself, I’ve read my fair share of other books on NASA, mainly focusing on autobiographies. Moon Shot doesn’t take sides in the Space Race, and the narrative of this book is focused on three conclusions as evidence.

The first is the relationship between authors Alan Shepard and Deke Slayton, which isn’t just because they were both members of the original Mercury Seven, but also because they were both grounded for periods of time. Both of them endured to overcome their groundings. In Shepard’s case, it marked his return to space; in Slayton’s, it punctuated his journey to finally get there.

The second is the Space Race itself and how the missions added up and built towards putting a man on the Moon, as both the Russians and the United States raced to get there first.

The third is the poetic conclusion of Apollo and the Space Race itself with the Apollo-Soyuz mission that brought the two Space Race competitors together. It was an unprecedented and, just years earlier, an inconceivable mission from both sides of the race. 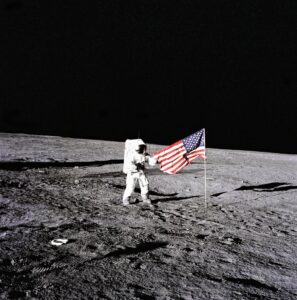 Of course, the complete history of the race to the Moon would be much longer than the 365 pages of the hardcover edition of this book. While one could argue that every single Russian or American launch was critical to putting boot prints on the Moon, this book covers the most important incremental steps.

It does its level best to mention as much as it can, but if it had mentioned every launch and mission in the same detail, this would be a much longer book and not nearly as compelling a story. That’s the thing: even though you know how it ends and many of the establishing stages, the narrative crafted by Barbree and Benedict, with the help of Shepard and Slayton, is so interesting that it’s no wonder that Moon Shot is the basis for a mini-series bearing the same name.

I already knew many of the events chronicled in Moon Shot after reading Deke’s autobiography and several other astronaut biographies in my collection. There are, however, still little stories and details that jump out as fresh nuances that make this book a worthwhile read for those with any level of interest in space travel and the race for the Moon.

And then there are my favorite quotes in this book. Two, in particular, come near the end of the book, and both come from the astronaut authors. The first is from Shepard:

“How much bigger this monster is . . .” he thought, not even certain he had spoken the words aloud. But the sight was staggering. The Saturn V loomed nearly five times taller than the Redstone, and Alan reminded himself it also was a hundred times more powerful. Even the escape rocket atop his Apollo spacecraft had twice the power of the Redstone booster.

Shepard was America’s first man in Space in Mercury, and he returned to fight status for Apollo 14. I just love the idea that the astronauts, especially those who were a part of more than one program, were so impressed with the leaps and bounds in the technology around them. Shepard’s quote encompasses that for me. 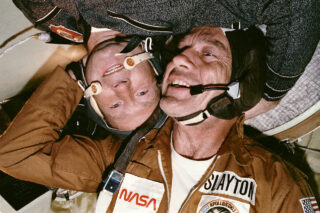 And then there’s the quote from Slayton after he finally gets to space during the Apollo-Soyuz mission and after they had disembarked from their rendezvous with Soyuz. As Deke is looking back at Earth, he postures:

It all condensed into this one single, long look at fragile, beautiful earth, as though he were sent here, he and the others, so they might look back at that lovely, sensitive sphere and then carry home the message that everyone there must learn to live on this planet together. It didn’t matter who liked whom, or on what side a man might find himself, because they were all on the side of a world of very definite finite resources, and they would all suffer terrifying consequences if they drained to bare bones the world that had conceived the life of the human race, fostered and nurtured that life, which not threatened to contaminate and destroy–

It’s a sentiment that you find in almost every astronaut that returns from space. Whether they went to the Moon, low or high Earth orbit, they all return as the most grateful for the planet as it is, and they hope to pass on the message that it is beautiful but fragile. Slayton covers it beautifully, but take it from a well-read NASA nerd that everyone who returns from space has similar sentiments. Everyone.

If it’s not obvious, I highly recommend Moon Shot: The Inside Story of America’s Race to the Moon. Happy reading!

Read the Secret File of technical information and quotes from Moon Shot.

Let’s finish this up now, someone is waiting for you on that.
To let another into your heart, first let yourself in.
The path of life shall lead upwards for you.
More Fortunes >