I’ve been alternating my reading habits between fiction and non-fiction for a while now, but most of my fiction has been realistic fiction. These are stories that exist in a made-up real world. It could be argued that The Yiddish Policeman’s Union is realistic fiction that feels like surrealistic fiction, which was one of the reasons I couldn’t put it down.

This is my fourth Michael Chabon novel behind Kavalier & Clay, Wonder Boys, and Summerland, but it feels different. It has a bit of Chabon’s writing style, but it’s so very different that it stands on its own. As a reader of authors and not just a reader of books, it’s interesting to me and makes me more interested in his other works. Where else did he go following his creative itch, what else did he create?

The Yiddish Policemen’s Union follows the investigation of detective Meyer Landsman of the “Federal District of Sitka, a ‘temporary’ safe haven created in the wake of the Holocaust and the shocking 1948 collapse of the fledgling state of Israel.” This investigation creates a whodunit question, plus as the inside cover details “a love story, and an exploration of the mysteries of exile and redemption.” 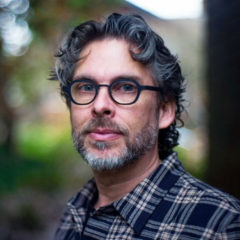 Chabon writes of this fictional world in such a way that you get lost in the details of its fictional history and start to really wonder which world is real. But his internal struggles of love, self-discovery, exile (self and other), and redemption are at the forefront of many characters’ minds as the “strange times to be a Jew” motif is reiterated countless times. Unfortunately, it’s not something confined to the book. This was published in 2007 and likely inspired by generations of Jews.

It is a murder mystery, but it feels like something more personal for Landsman. Chabon describes his lead characters as having “the memory of a convict, the balls of a fireman, and the eyesight of a housebreaker. When there is a crime to fight, Landsman tears around Sitka like a man with his pant leg caught on a rocket. It’s like there’s a film score playing behind him, heavy on the castanets. The problem comes in the hours when he isn’t working when his thoughts start blowing out the open window of his brain like pages from a blotter. Sometimes it takes a heavy paperweight to pin them down.”

That description, by the way, comes on page two of the novel. So you’re either really invested in Landsman and what’s about to become of him as a murder investigation unfurls, or you’re not. While Landsman grows, he doesn’t change, which is a small but important distinction.

Landsman and the surrounding characters are well-rounded interesting allies and foils for the novel and investigation, but the Jewishness of this book is undeniably integral.

The three most intriguing pieces of his commentary on the concept of “the messiah” are potentially the starter course of religion and philosophy students the world over.

“Every generation loses the messiah it has failed to deserve. Now the pious of the Sitka District have pinpointed the site of their collective unworthiness and gathered in the rain to lay it in the ground.”

“Every Messiah fails, writes Litvak, the moment he tries to redeem himself.”

“A Messiah who actually arrives is no good to anybody. A hope fulfilled is already half a disappointment.“ 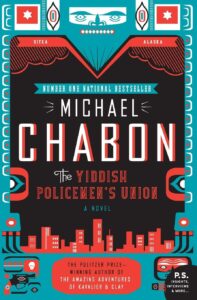 And I wonder if this could be transferred to the hope of some help arriving? On a smaller scale, do these statements work for something lesser than a Messiah? I think they might.

But Chabon isn’t content with just that conversation. He has two other very thought-provoking points, among many others, that have stuck with me.

The first is that “as a foundation for a partnership, mutual pity is not to be despised.” It’s a hard truth, but that doesn’t make it false.

Second, and perhaps my favorite line from the entire novel, “the people who worry about losing their edge, often they fail to see they already lost the blade a long time ago.”

I can imagine that this book would make for a great discussion piece at your next book club, but it can make you think all on your own. Its lines, questions, and hypotheses are likely to stay with me for a long long time.

Read the Secret File of technical information and quotes from The Yiddish Policeman’s Union.

Nothing in the world can take the place of persistence.
Even the greatest of whales is helpless in the middle of a desert.
Things are turning for the bright side.
More Fortunes >