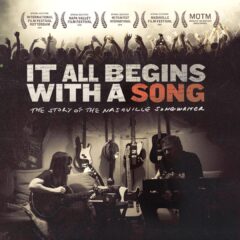 If you have been listening to The Palmer Files podcast or following me on Twitter, then you know I am interested in the process. I love figuring out how it’s done, how to do it better, how to create and recreate. I’m intrigued by all of it, and “It All Begins with a Song” is absolutely about the process.

It’s the story of Nashville as the songwriting capital of the world, but it’s also about the process of songwriting, which is applicable to any and all creative endeavors. For this reason, every creator should watch this documentary.

Why is Nashville the songwriting capital of the world? Rodney Crowell sums it up best by saying that “an industry was born out of entertainers being out on the road and not having enough time to write songs.” And why were they on the road? Well, they were either touring or traveling to and from Nashville to be on the largest stage of that time, way back when radio was king and the Grand Ol’ Opry wasn’t just as much a religion as it was a historic landmark.

As much as this documentary will be enjoyable for fans of country music, it will resonate on a personal level with anyone who has been creative; specifically writers. Artists of all kinds, however, can draw parallels.

“It’s a beautiful town. It can make all your dreams come true. But it can also be such a bitch of a town. It can be so hard. You’re putting your heart out on the line daily and getting it smashed because it doesn’t sound like the radio or no one will ever record that song ‘cause it’s too sad, or something.”

You can replace “town” and “radio” with any creative industry and distribution method you want and have the statement still be true.

And if you want further proof that songwriting is like writing a book, selling a script, or any other creative pursuit where judgment factors in, understand that in any medium, “no” is the most common currency, and how you deal with it is important. As Lee Thomas Miller says of songwriting, “It’s a no business. You’re gonna hear no. No is usual. You’re gonna write a lot of songs, and they’re gonna pass on most of them. So you’re gonna have to want it bad enough to deal with failure. Because when they finally say yes, it’s amazing.” 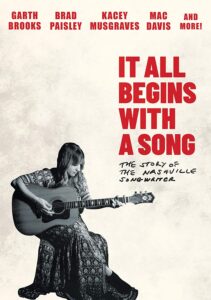 All creative pursuits, especially those with established media and mediums, are “no businesses.” In truth, most things in life are a “no.” We hear no a whole lot more than we hear yes, but you just have to keep at it.

And why do songwriters keep going? The same reason anyone keeps writing, because as Crowell states, “Anybody who’s made a career as a writer will tell you, really in some ways, it’s not even the end product. It’s the process that’s most important.“

I’ve spoken to other creatives, and it’s why I think all of them should watch this documentary. On the surface it’s about songwriting in Nashville, but it’s truly about process. What’s more, it’s about a process that is beyond our comprehension.

Kacey Musgraves sums it up best: “It’s just crazy that it’s an industry, an industry where you go to work having no idea what you’re actually going to produce, and you’re gonna take an idea that’s floating around in your head and put it on paper and make it, you know, actually concrete, which turns into hopefully, a song, which turns into a demo, which turns into maybe hopefully a record cut, which then people over the world hear. It’s like, what, how is that even a job?”

All of these wonderful creatives are here in “It All Begins with a Song” just pouring out their process to you. It’s not only that they talk about it, the documentary shows them at work. It shows you people using phones to record or notepads to scribble lyrics down. They’re messing around on instruments or just talking through their thought process. It’s what most creatives do when we get together.

If, for some reason, you can’t get it together, but you want to hear a conversation about process, you can listen to almost any episode of my podcast or turn on “It All Begins with a Song.”

Read the Secret File of technical information and quotes from “It All Begins with a Song.”