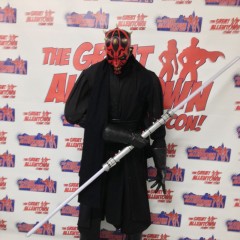 I really do enjoy going to The Great Allentown Comic Con. It’s always full of and eclectic bunch of artists, writers and celebrities. It has friendly dealers that are just as willing to strike up a conversation as they are to sell you something. You can haggle prices and there are always people cosplaying, or if you prefer, there are always people in costume.

This year, I picked up some loot. The spoils of war, though not as large as past years, were still great in quality. There is something to be said for sifting through a long box of comics and finding that one of interest to you. I’m not saying you find value in the dollar boxes, I’m saying that for those of us who pick up comics to read, maybe you’ll find the book that takes you to the next series you’re going to read. 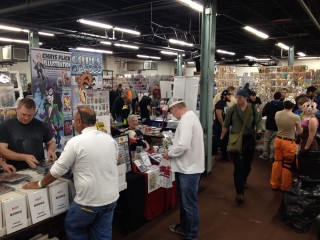 Before I get to my loot, Artist Darren Auck was doing scaricatures, where he draws you as a zombie. I spoke with a few of the guys at Hound Comics, who by the way, are really hitting on all cylinders. Hound Comics has been featured on Big Bang Theory and as independent comic publishers go, their stable of titles from Brimstone and the Borderhounds, Ceasefire, Soldiers of Karma, The Grey Guardian and Chron of Mayre to name a few are all very well written and drawn.

I was able to meet Bonnie Piesse, or Young Aunt Beru, who was there talking about Star Wars but also trying to sell her solo EP Bittersweet. Shes’ been touring the States in support of this, her debut album. I did purchase a copy, I like to support artists, whoever they may be. Stay tuned as I get the feeling, I’ll be writing a blog post entitled, “Aunt Beru can sing,” soon enough. 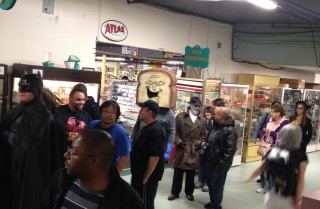 Powdered Toast Man was there, I’m serious, this is great, just like a few years ago when Quailman showed up. These off the beaten path characters are usually a hit and this year Powdered Toast Man was no exception. I would say disbelief and awe were the two most common responses to seeing the costume.

The Joker was there, Deadpool tried to kill him, there was a huge Wolverine, Ghostbusters, Judge Dredd, Kaylee from Firefly, Batman, a few Mandalorians, Thor, Loki, you get the point, there were a lot of characters out at the Con.

So what did I get, what spoils to I return from the Con with? I did find a few old Heavy Metal Magazines, once I fill in my collection up through 1990 or 1991, I’ll stop collecting, there is just something about the old ones, I truly enjoy. I picked up a few Joseph Micheal Linser books, say what you want about Dawn and his women, his writing is in depth and thought provoking. 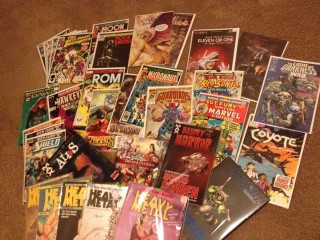 Not the only, but one of the jewels of my spoils was Death Dealer, a comic done by three amazing men, Glenn Danzig, Simon Bisley and Frank Frazetta. This is a book I cannot wait to read, but patience is a virtue, I am attempting, so I’ll get there.

I picked up a few trades, and a few more miscellaneous single issues and series. All in all, I came in under budget and as any geek knows, going to a Comic Con and coming out with money is quite the task. Temptation at a con, be it art, comics, or other geek accouterments are essentially surrounding you. But that’s part of the allure as well.

As in past years, the event was held at Merchants Square Mall. I like the mall itself, it’s a little off the beaten path and has an auction hall and other quaint little stores. In the past it has had enough room for The Great Allentown Comic Con, but not this year. This year, perhaps through better promotion or perhaps due to the celebrity draws or both it was packed, too packed. Usually, there is a line to get in at the beginning and then people come and go, but this year there was a line to get in for hours. The line never seemed to subside. Maybe it’s time for a change in venue?

I would consider moving it to the Allentown Agri-plex. It’s bigger but not too big. It would allow for the expansion of more artists, celebrities and vendors. It would also allow for the bigger crowd. For those who came to cosplay it was cramped, for those who came to collect it was cramped, for anyone there it was just cramped. It seems that after years of being the Con that could, it is now growing faster than it’s current location can accomodate. I think it’s time for a change in venue.

All in all, in spite of the lack of personal space for those attending, The Great Allentown Comic Con was a success. There were smiles, laughter, candid conversation and treasures to be found by all. I hope they do move to a larger venue and continue to grow, it is my favorite little Con, and in spite of it’s growing popularity, it will continue to be my favorite little Con.

T-Shrts and Art at The Great Allentown Comic Con

Jewelry and Movies at The Great Allentown Comic Con

You are interested in higher education, whether material or spiritual.
Good clothes open many doors. Go Shopping.
The path of life shall lead upwards for you.
More Fortunes >