“Like a Rolling Stone” Music Video: Choose Your Own Channel 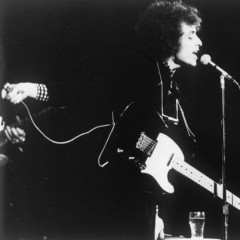 Bob Dylan’s Like a Rolling Stone is making a comeback as an innovative interactive music video. The concept is really simple, you’re watching TV and you have 16 channels available, but they are all different versions of Like a Rolling Stone by Bob Dylan, spoofing channels and shows all singing along in complete synchronicity.

While watching the video you have control over the TV, you can use the buttons on the screen or hit your up and down arrow buttons to change the channel. Or you can just watch the video without touching anything and it will channel surf you throughout the song. Below is a complete list of the channels and shows on them available within the interactive video and the video itself.

This isn’t some flash in pan. Rick and Chumlee from Pawn Stars, Drew Carey hosting the Price is Right, Steve Levy on SportsTime is sitting in Bristol at the ESPN SportsCenter studio, Marc Maron is in his studio and many more. You don’t just randomly get names from that far and wide to do something small.

Powered by Interlude – Interactive Video and created by Interlude’s Treehouse the purpose of the new interactive music video is to sell The Bob Dylan Complete Album Collection Vol. One – CD Box Set. Will it do so? That remains to be seen, but it is traveling at the speed of “viral” throughout the internet.

I saw one post today that said, “Shut down the interwebs, folks. This wins it all,” with a link to the video. I know some people that have watched it a few times and I’m sure everyone has their favorite channel, but as a whole the project is interesting, and I’m not sure where it leads us. It’s an interesting piece of art, but I’m really just not sure what to make of it.

Let me know what your favorite channel to watch the video on is, or if you just like flipping through.

Fame and fortune are coming your way.
Nothing in the world can take the place of persistence.
Even the greatest of whales is helpless in the middle of a desert.
More Fortunes >