A Shock to the System: Die Yuppie Scum and other Corporate Insights (A Spoiler Free Review)

“Climbing up the corporate ladder can be murder” says the promotional poster for A Shock to the System. The poster also contains a quote from the Atlantic Journal and Constitution stating,”A film for anyone who ever muttered, ‘DIE YUPPIE SCUM!'”

Quite honestly, it’s a lot more than that, but those things do cover the broad basis of the film. 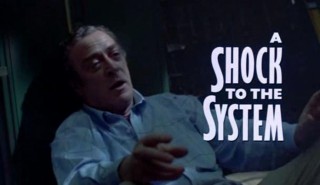 A Shock to the System Title Screen

Before the rise Silicon Valley and the first dot-com bubble, when California was not a center of business, just the center of entertainment, New York, New York, the placed so great they named it twice was the place to be. Graham Marshall, played by Michael Caine, one of the “brain drain boys that came over from England in the 60’s and 70s” as George puts it, was trying to climb up the corporate ladder for decades. This was going to be his finest hour.

The movie starts with the narrative, “It all began one night when the lights went out…” And it did. Graham went to the basement to fix the electricity and gets quite a shock. The next scene is an argument with his wife, the following morning, about how the whole house needs to be rewired and she’s counting on his impending promotion and raise. She’s also planning a “surprise” party for his promotion, which he has yet to officially receive.

On the way to work, we hear Graham narrate his commute,

“Try to understand, he’d always fancied himself a sorcerer capable of fixing anything and now, in his own house there were constant failures of power… If a sorcerer’s house isn’t his castle what is it? Still, he was looking forward to his promotion, he’d worked hard for many years in the American corporate structure, he’d earned it. But the magic was just draining out of him every time he got on that commuter train, back and forth from the suburbs every day… every day.” 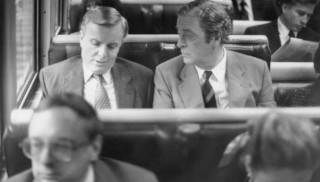 Graham Marshall and George Brewster on the Train

On the train, Graham has a conversation with aforementioned George Brewster, his boss, which is much more like George complaining about his impending retirement and the change of business philosophies.

“Space invaders Graham, the new people, all gadgets and the bottom line… Stop them early or they’ll run right over you. We can be more efficient on such and such a program. Bah, ba, bah bah, it’s all bullshit, soup to nuts. It’s code for mass firings and low quality, just melt the market dry and get out. I mean if our system wasn’t any good, why’d they take us over in the first place, right?” 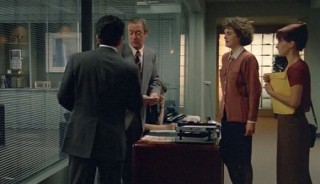 The tide is turning on Graham

“Have a look at this, the number crunchers designed it but the thinking basically is mine.”
“What is this?”
“A program that projects survey responses from pre-processed data.”
“Oh, that’s great but what is this?”
“It makes it unnecessary to go back to the public with a new release. It predicts how they’ll react.”
“Does it buy the product for them?”
“Well, not yet.”
“Bring it back when it does, we’ll do lunch.”
“Graham, seriously, this has huge cost-cutting…”
“Later Bob.”

That conversation in continued with,

“Bob, about that thing…”
“Forget about this, there’s something more important. As spokesman for some of the younger turks, I’m supposed to invite you to lunch, in celebration of your approaching greatness.”
“Oh, Christ today?”
“Come on, executive bonding, raucous unfunny jokes and we’ll kiss your ring in the hopes you’ll mistake it for affection.”
“How degrading for you, I’ll be there. What time?”
“12:30”
“Fine”
“and bring your ring…”

These two dialogues are hugely impactful for the rest of the film. The first is about changing technologies, a somewhat apt continuation of George’s rant on the train. The old school, Graham places his stock in people, while Bob, the new school places his stock in technology. It’s a conversation that could be had in any business today, except that today, the technology does exist for the program to buy the product for public. 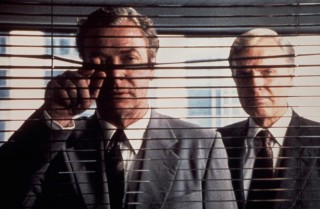 The second part of this dialogue, is about climbing the corporate structure. I’m not privy to the private lunches, meetings and conversations of high politics in corporate culture, few are, but from the news that I read in the paper, on the internet, or watch on television, this is still very much how corporate culture works. It may not be pretty or efficient, but it is how it’s done.

Does this lunch work out for Graham? No. When they return from lunch it’s been announced that George is being forced out earlier than expected and Bob is going to be promoted to the head of marketing over Graham. This doesn’t sit well with Graham and while wandering around in a stupor, he’s asked for change from a bum in the subway. Graham, doesn’t give him anything and when the bum comes at him, Graham pushes him and he falls into the subway in front of an oncoming train. 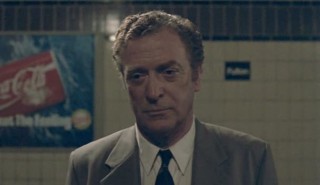 Michael Caine as Graham Marshall in A Shock to the System

This is the start. Graham, has gotten away with murder and is convinced that he has some kind of sorcery at his command. He takes a few days to tell his wife about not getting the promotion. After coming clean with her Graham narrates, “that’s when he realized she was a witch, for his survival he was going to have to get rid of her.”

“He had no idea what was going to happen. Actually, it was the first black magic he’d ever even tried. He was gambling with the fates, rolling the great dice.” Is the narrative as Graham takes a trip after setting up his wife’s death.

I’m not spoiling too much to telling you that he gets rid of the her, she being a witch and all. It sets up nicely for him to sell the house, move to the city and get a new love interest. It also gives this thriller a chase. Lt. Laker, played by Will Patton, a member of the State Police, who investigates Graham’s wife’s murder, keeps tabs on Graham, throughout the remainder of the film. 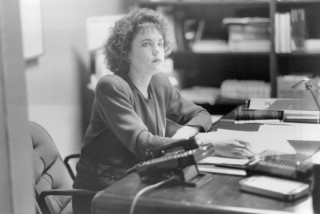 The new love interest is Stella Anderson, played by Elizabeth McGovern, who is an assistant at the company. Throughout the movie, after his wife’s death, he refers to her as an apprentice, as in, “every sorcerer needs an apprentice.”

From here, I’m not going to give away any more away. To continue would be to spoil the remainder of the movie completely.

One thing of note, is that while scattering the ashes of his deceased wife, they blow back in his face, a scene the Coen brothers used similarly in the Big Lebowski some eight years later.

This movie is extremely well done and although it is classified as a thriller, it gives the viewer amazing insight into corporate America’s main battlegrounds for the time of 1990, when the film was released, as well as, for today. The battle between people and technology, compassion and the bottom line and the the battle between new school and old school.

The film released on March 23, 1990 only ran until May 24th, grossing just under $3.5 million at the box office, but this film is still largely unknown, so you can be the first of your friends to bask in the brilliance of this film and then show off to your friends about how you’ve discovered this very underground cult classic film.

Read the Secret File of technical information and quotes from A Shock to the System.