The Year of Living Biblically: Insight into Religion from A.J. Jacobs (and Applied to Fandoms) 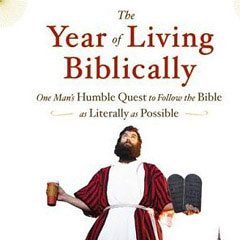 The Bible, consisting of both New and Old Testaments, in all it’s forms and versions is an extremely polarizing collection of words. In “The Year of Living Biblically: One Man’s Humble Quest to Follow the Bible as Literally as Possible,” A.J. Jacobs catalogs his mental, physical and emotional journey through the waters of ancient and modern biblical literalism.

It’s hard to write about this book without giving away his conclusion, so I’m going to. But this book is much more about the journey than the destination in that regard. So I’m really not spoiling anything, because it’s not his general observation overall that’s the main enjoyment of the book. It’s his observations of all the big and little rules and laws that make this book so fascinating.

“I learned that you can’t follow every single rule in the Bible. There is a certain amount of picking and choosing. And fundamentalists call this cafeteria religion and they mean it as an insult. But I say: What’s wrong with cafeterias? I’ve had some delicious meals at cafeterias.” 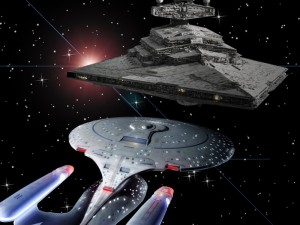 The thing about this statement which strikes me is that we all do it and not just with religion. Star Wars tends to be the best example, as even the most fanatical tend to view certain movies or parts of the movies as less than the whole and gloss over them. There have even been dark times for the Enterprise that Star Trek fans tend to ignore as well.

The difference, of course, isn’t in the subject matter or how it’s viewed. A lot of fandoms like Star Wars and Star Trek have, what could be described as, a religious followings. The difference is that in terms of Christians, Jews, Muslims and other major religions, if you disagree with the doctrine it tends to lead to violence, at least in history it would appear that way.

A.J.’s journey and research physically took him to Israel, the Holy Land. There he saw a rainbow of religions living together. If they can do that, certainly Star Wars and Star Trek fans should be able to get along.

At the start, Jacob’s journey seems like a very daunting task, but the man jumps in with gusto. Sure, he breaks a few rules along the way, but you have to break a few eggs to make a cake. There are a few times, in the very beginning where you get the feeling that he’s in so far over his head that you expect the rest of the book to be an apology about how he’s sorry he didn’t finish the year, but he forges through.

The format is very much like a diary. There are 12 chapters in the book, one for each month, and within those chapters is an entry for each day he wrote about. He didn’t write 365 entries, but I suspect there are some days that would have been duplicates of each other. I do wonder what a daily online blog of his year would have looked like… 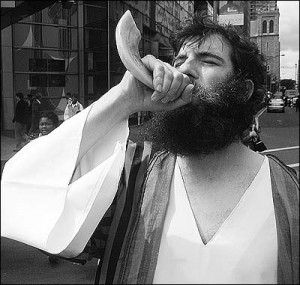 He tackles the Ten Commandments we all know, as well as, to be fruitful and multiply and his insights into them are by my account, outstanding. But as he follows some of the smaller ones, white garments, growing a beard, etc, he questions them, while gradually coming to embrace some of them. It’s one of the many transitions that you see in his thought process throughout the book.

His conclusions are witty, educated and honest. The man references, what seems like, 100 different books, and I’m sure he read more than just the ones he references in his own text. He also has a spiritual advisory board, for guidance but they weren’t there to tell him what to do, they were there just for support.

Why should you read this book? Because it’s an amazing insight into the world of religion. But it’s more than that. It’s an interesting journey into the culture of religion as told by a novice, an outsider. It would be like someone who’s never read comics explaining their experience at a comic convention.

To let another into your heart, first let yourself in.
Nothing in the world can take the place of persistence.
Good clothes open many doors. Go Shopping.
More Fortunes >