A digital sketch and a real sketch, a digital painting, a poster and a fake Magic card. From all of these different techniques come five pieces of art that are all worthy of a home in an art gallery, an art gallery featuring a Pop Culture exhibit to be exact. 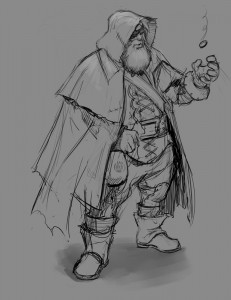 Maybe it’s just me, but I was stunned by this digital sketch titled, “CDR – Aged Rogue” because it seemed to be  more of a detailed sketch of Drachma from Skies of Arcadia. Now the piece was done for the Character Design Rush group on Facebook by artist Justin Wong a.ka. failstarforever.

While Drachma doesn’t wear a hooded cape and has a huge mechanical left arm, those differences aside, this could pass for the spitting image of Drachma. In fact, one could go so far as to say this “Aged Rogue” is just a younger version of Drachma, before he lost his arm.

Now, maybe only a fanatical Skies of Arcadia fan, like myself, could spot this, but I’d like to think that even the casual Skies fan could see it. After all, art is in the eye of the beholder and as such, Drachma is who I see in this digital sketch, which looks very much like an actual sketch, if you ask me. 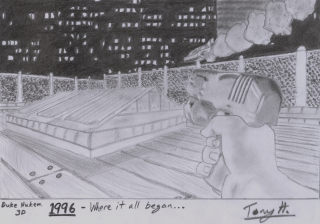 It is no secret, I like the Duke Nukem franchise, but for me, and many others apparently, Duke Nukem 3D is the top of the heap. Now, I do believe this has a lot to do with the climate of pc gaming in the 90’s, but it’s still a unanimous PC classic. As such, this recreation of the first level in Duke Nuken 3D, Hollywood Holocaust by Tony Hughes, Kazuhira3574 is brilliant.

In his description Tony says that he “wanted to draw from the classic sprite-based version instead of the High-Resolution Pack’s fully 3D rendered version, since it felt more authentic,” and I could not agree more. But I was amazed that it only took him “20 minutes to get this far.”

This is very impressive and looking at a sketch of a video game, I know so well, changes how I look at it. This is so good in fact, it could have been the schematic they used to build the level off of. 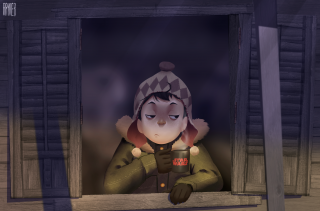 Next up, is a piece that shows how a lot of us feel on Monday mornings and it is actually titled, “Monday Morning.” This was done by artist Rayner Alencar, from Brazil, for a contest of some sort back in 2012.

The caption is, “Nah.. too lazy..,” which says all that it needs to say, in my opinion. Mondays are not to be taken lightly, but in this case the character in the window is prepared.

A cup of steaming, hot coffee for maximum caffeination and it is in a Star Wars cup, which leads me to believe that this character is also invoking the powers of the Force, in order to tangle with Monday. 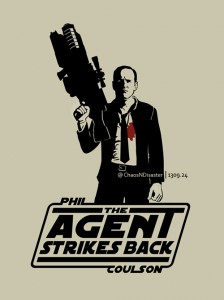 The Agent Strikes Back by ChaosNDisaster

Agents of S.H.I.E.L.D. is getting a lot of play with it’s overlap in Captain America 2: The Winter Soldier, but let us not forget that S.H.I.E.L.D. has been there since the beginning and in the beginning there was Nick Fury and Agent Coulson.

Coulson is back in Agents of SHIELD, something that is no surprise but let us not forget that Coulson played a huge role in at the end of the Marvel Cinematic Universe’s Phase 1 in Avengers.

This is a wonderful graphic representation of what, at the time, was Agent Coulson’s most heroic moment titled “The Agent Strikes Back.” ChaosnNDisaster captures Coulson, while borrowing the Star Wars, Empire Strikes Back logo and typeface, stealing a graphic style reminiscent of the poster for Reservoir Dogs.

It is in a word, brilliant, because of the styles borrowed to make up the piece and the content of the piece itself. 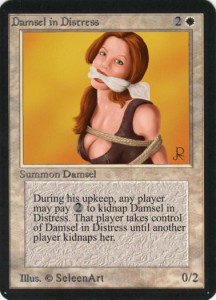 Magic the Gathering Damsel by SeleenArt

Making your own Magic: The Gathering cards is nothing new, but most of them are either hilariously ridiculous or created for a fandom i.e. Duke Nukem is a Summon Duke.

Damsel in Distress by SeleenArt is different. First off, it has a reasonable casting cost and power/toughness. The ability to kidnap the Damsel is great and I can think of ways to build a deck around such a card. And then there is the artwork.

It’s not a photo, it is legit art and it was done in the style of Douglas Schuler, one of the original illustrators for Magic: The Gathering. Schuler was responsible for the Queen of White, Serra Angel and SeleenArt mimics the style very well.

From video games and collectible card games to movies and main stream media, online art in communities such as deviantArt is a fertile land, full of talent, you just have to take the time to look.

You are interested in higher education, whether material or spiritual.
Even the greatest of whales is helpless in the middle of a desert.
Let’s finish this up now, someone is waiting for you on that.
More Fortunes >