On March 18, 1965, The IPCRESS File was released to film audiences, just three years after Len Deighton’s book of the same name was published. It was directed by Sidney J. Furie and starred a then-unknown British actor named Michael Caine.

An alarm clock wakes up Harry Palmer, played by Caine. His vision is blurry until he puts on his glasses to reveal a fairly average apartment. In his pajamas, he grinds up coffee beans and gets dressed before finally fixing his morning coffee. This was done to make Palmer appear more normal than the super spy agent of his time, James Bond.

Palmer then walks to what appears to be a run down house for surveilance, where he is 20 minutes late. The comrade in arms that he’s replacing berates him for not being “neat and tidy,” reminding him that he’s still in the army. Palmer quips, “I’ll tell you what, you remember for me.” While chuckling about his audio recording report, Palmer is relieved of his surveillance duties to meet with Colonel Ross.

Harry Palmer talking to Colonel Ross in The IPCRESS File

They start by discussing Palmer’s B-107 (a report), which Ross says makes “lovely reading,” before they get on to his transfer to Major Dalby’s outfit. The dry wit in this scene is very well written and makes Palmer appear as a misfit which, of course, he is. Ross speaks with Dalby about “brain drain,” as it appears many government scientists have been leaving their posts at the peak of their careers. Some have for good reason, but the motivation for others is not so clear.

During their meeting, Ross calls Palmer “a little insubordinate, but a good man.” With that Ross exits and Palmer goes in to meet with Dalby.

Dalby says, “It isn’t usual to read a B-107 to its subject, but I’m going to put you straight. Insubordinate, insolent, a trickster, perhaps with criminal tendencies.”

“Good that last quality might be useful,” retorts Dalby.

While walking to the briefing, Palmer asks if the man he’s replacing will show him the ropes. It is then that Dalby explains the man he is replacing was shot that morning. The assignments are handed out in the briefing, but Palmer is more interested in the lovely lady in the room, Courtney.

Harry Palmer is more interested in Courtney than the Briefing

After the briefing, Alice, the secretary for the outfit, shows Palmer his desk and explains the paperwork, making an emphasis on Form L101 . Palmer asks one of his colleagues what a Form L101 is, and it’s a field report that needs to be completed after every job. Palmer’s response is simple: “It may be Dalby’s way of doing things, but it isn’t mine.”

From there, Palmer, in the the rain, parks his car and pays the parking meter. This kind of dull thing isn’t something Bond is usually caught doing, but the film they set out to make was primarily based upon Len Deighton’s book and secondarily built upon the premise that Harry Palmer is not James Bond.

From there, it’s on to the case where Palmer finds his mark and loses him. He ends up in a fight with the mark’s bodyguard and before the fighting begins in earnest, Palmer takes off his glasses. After that, it’s on to another briefing where Palmer was the only one to come close to accomplishing the goal, albeit close but no cigar.

After the briefing, Palmer stops by the grocery store on his way home, were he finds that his apartment has been broken into. Before entering the premises, he puts down his groceries outside, as to keep them out of harm’s way, draws his gun, and enters to find Courtney, who was sent by Dalby to check up on the new guy.

Palmer, always the gourmet, asks Courtney to put on Mozart, or as he put it, “music to cook by,” and sets about making a meal for two. Courtney comments that he’s very professional and that’s true. That’s pulled straight out of the book and more of a statement about Deighton that he put into his character than a statement about Palmer himself.

While cooking he asks Courtney what she’s going to put in her L101. “That you like girls, that you’re not the tearaway he thinks you are. You also like books, music cooking.”

Later on a hunch,  Palmer calls for a TX-82, which gets him a lot of men, even though it’s an abuse of power that he doesn’t have. After the hunch turns up no men, only some recording tape labeled IPCRESS, he says to Dalby, “You know its funny if he had been here, I’d have been a hero.” “He wasn’t and you’re not,” Dalby replies dryly.

Again, Palmer is shopping in a grocery store – something I don’t think James Bond could ever have been accused of doing -when his former boss Ross asks him for information on the IPCRESS file. This is the start of the slippery slope for Palmer.

The incident at the grocery store was a prelude to Palmer cooking dinner for Courtney. He asks her who she’s working for, Dalby or Ross? She asks him the same question and it’s left at that. After dinner, she asks him, “Do you always wear your glasses?” “Yes, except in bed” and with that she takes them off for him. 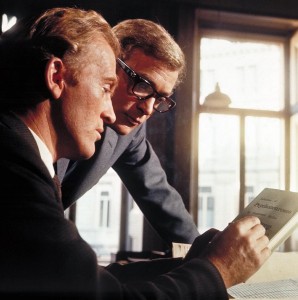 Palmer and Carswell discover the meaning of IPCRESS

Palmer eventually makes his mark and a deal is done, but the goods turn out to be damaged. Meanwhile, Palmer and one of his colleague finds out what IPCRESS stands for: Induction of Psycho-neuroses by Conditioned Reflex under strESS.

From here on out, it’s a guessing game of who’s playing who. Palmer and Courtney are pawns, but whose pawns are they? I won’t spoil the film, but it’s a master spy thriller mystery on par with the book, although only thematically.

Now in the book The IPCRESS File, the main character is not named, but for the movie, they pulled from a conversation the main character has which was, “Hello, Harry.” “Now, my name isn’t Harry, but in this business it’s hard to remember whether it ever had been.”

One of the more interesting things about this movie that was revolutionary for the 60’s in cinema was the introduction of a male lead who could cook and was happy to do so and who knew his way around a grocery store.

This film was well ahead of its time. It went up against James Bond, but in the history of cinema, the Harry Palmer films only number five. It’s a decent number for one character, except that Palmer was and continues to be compared to James Bond, who has been played by multiple actors and whose films are still being made.

That said, this is a wonderful film, every part the spy film, thriller and mystery that it is.

Read the Secret File of technical information and quotes from The IPCRESS File (Film). 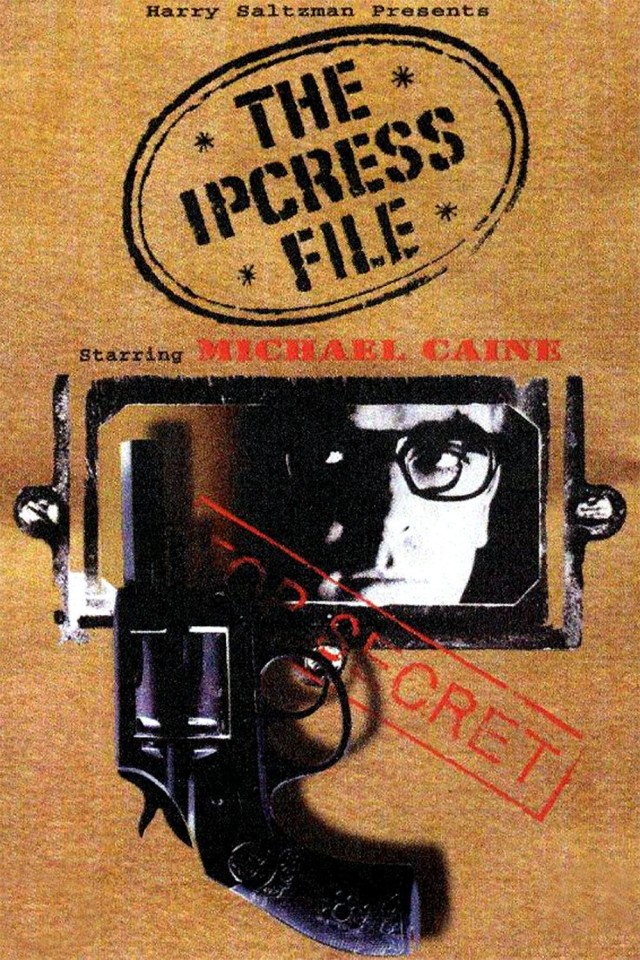 Look forward to great fortune and a new lease on life!
Whoever wants to reach a distant goal must take small steps.
You are interested in higher education, whether material or spiritual.
More Fortunes >