Small Oddities: Transformers, Rocko, Maleficent, The One Donut and an Afternoon Noir

Digital art, a crocheted doll, evil food art and and a scene complete with an ominous caption are featured in this Small Oddities. I am never disappointed by the talents of those true artists sharing their works on deviantArt.com. 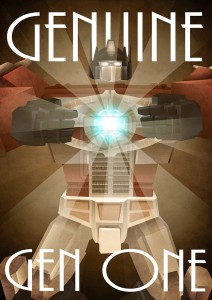 Genuine Gen One by wordmongerer

It is next to impossible for me, as a Gen One fan of The Transformers, to see this brilliant poster “Genuine Gen One“, from John-Paul Bove a.k.a. wordmongerer, and not hear “The Touch,” the pinnacle song from the first full length animated feature film The Transformers: The Movie from 1986.

More to the point this poster really captures the essence of that film with Optimus Prime holding the Autbot Matrix of Leadership, which in the movie is passed from Optimus Prime to Hot Rod, who then becomes Rodimus Prime.

The Autobot Matrix of Leadership’s primary function is to one day light the Autobots’ darkest hour and of course, in the 1986 film, that darkest hour helps them defeat Unicron.  This piece is a beacon of nostalgia featuring both Gen One Optimus Prime and the Gen One Matrix. For fans of Gen One, there is nothing finer. 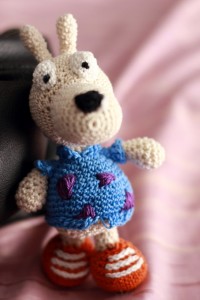 Moving on from one part of my childhood to another, is this Rocko’s Modern Life doll of Rocko by crochet ninja a.k.a. Nissie, who also has a storefront on deadcraft.com. The description lists it as a 4 inch high crochet doll of Rocko from the hit Nickelodeon TV series, and that is exactly what it is.

For those of you unfamiliar with Rocko’s Modern Life, don’t fret.  It only ran for four season totaling 52 episodes from 1993 to 1996, but it’s making a comeback. It is currently available for free streaming if you are a member of Amazon Prime.

For those who aren’t sure that a kids show from Nickelodeon in the early 90’s is for them, I have recently re-watched a few of them and the humor that is within the show is just as much for adults as it is for children, although not quite as off beat as other cross generational cartoon shows.

Fortunately, the doll appears on sale in the store with Rocko’s dog Spunky, but that doesn’t mean the store is limited to Nickelodeon shows, because there are plenty of cool crocheted dolls in there. Godzilla, Marvel heroes, Star Wars, Harry Potter, Adventure Time and the Walking Dead dolls can all be found in the shop, along with plenty of other characters from various fandoms.

Check it out, you won’t be sorry you did. 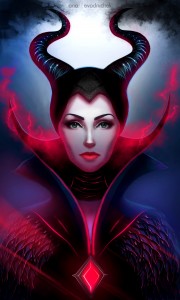 Next up is a unique digital painting of Maleficent by Jana a.k.a. kefirchik. It’s unique because in the movies and in many other places Maleficent’s colors are green and purple, but Jana has gone a different direction.

Using what appear to my eyes to be magenta and blue, Jana has recreated Maleficent in a completely new color scheme, although you can clearly see, that it is Maleficent, regardless of the lack of purple and green. The piece as a whole is a completely new take on Maleficent and that is kind of like a breath of fresh air.

We all know who she is, this villainous evil Queen from Sleeping Beauty, we know what power she has and that she can transform into a dragon, but even with all that, new colors give this villain a new look. It’s a more modern feel and such approaches lead me to ask questions about why other famous characters, not just villians, are usually done with their preexisting colors. Is it because it’s easier or due to a lack of visions? Well, in light of these questions Jana as done an amazing job capturing what we know of Maleficent and turning it slightly askew in a very beautiful way. 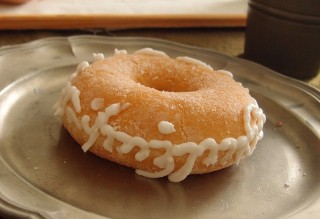 One Donut to rule them all by MirachRavaia

“One Ring to rule them all, One Ring to find them, One Ring to bring them all and in the darkenss bind them,” so what’s wrong with an evil doughnut? Nothing!

MirachRavaia has taken what I’ve know about the One Ring as a piece of solid gold jewelry forged in the fires of Mount Doom in Mordor and turned them inside out, with “One Donut to rule them all.”

We all know that certain foods are better left uneaten or consumed in moderation, but an evil doughnut? I’m sure it tastes good, but is it worth becoming a Nazgûl for? I mean, I’m sure it’s part of a completely evil and nefarious balanced breakfast, but for those who are of a Good or Neutral alignment, I’d probably say, stay away from this delectably villainous fried dough confectionery food. 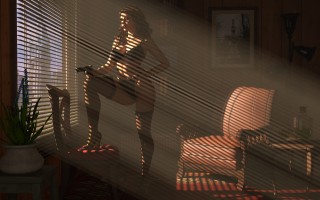 Noir films are unique crime dramas, that usually encompass a detective story of some sort. Most of the time, the classic, “she walked in my office and I knew she was trouble, but I couldn’t say no” is a part of the story.

Here in Afternoon Noir, Nathanomir has dropped the pretense. There will be no trench coat for disrobing and there will be no hiding of a weapon in a garter belt. This is a scorned woman waiting for her revenge. The caption, “the warmth of the sun melts the cold memory of his embraces. The light of her resolve slices through the shadow of his betrayal.”

That’s just the beginning and this visual is completely in line with the scene laid out completely in the caption of this piece. In a way, it twists the normal conception of film noir on its head, but it still maintains to be a part of that genre. I’m sure no one wants to walk into that room. And if it’s her man, I don’t think he’ll be walking out alive.

So there you have it, five pieces of art; some evil, some edible, some portrayed in a different light and yet another in a non-traditional art style. There are plenty of talented artists on the internet, you just need patience to find them sometimes among the filth and lies of an ever-expanding and seemingly infinite world wide web.

Let’s finish this up now, someone is waiting for you on that.
Good clothes open many doors. Go Shopping.
Look forward to great fortune and a new lease on life!
More Fortunes >