I Suggest You Read I Wear the Black Hat: Grappling with Villains (Real & Imagined) by Chuck Klosterman 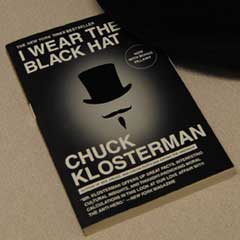 He’s written fiction, non-fiction, and essays about music, death, history and pop culture, but now Chuck Klosterman has turned his attention to villains with I Wear the Black Hat: Grappling with Villains (Real and Imagined), a book published on July 9th, 2013 and reprinted in paperback on July 1st, 2014.

Before we get into the book, let’s first look at the definition of the word villain, a noun. According to Merriam-Webster’s online dictionary, Villain is “a character in a story, movie, etc., who does bad things,” “a person who does bad things,” and “someone or something that is blamed for a particular problem or difficulty.”

In the book, Klosterman defines villain as “in any situation, the villain is the person who knows the most but cares the least,” and at one point changes the “but” to “and,” so it reads, “knows the most and cares the least.” But he doesn’t stop with the defintion, he mines popular culture and history for people who could be examples of villains based upon their positions and situations. 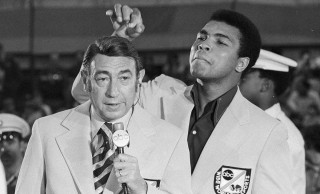 From Machiavelli to Muhammed Ali, NWA to Al Davis, Kim Dotcom to any IT guy, Chevy Chase to Aliester Crowly, Howard Cosell to O.J. Simpson to Bill Clinton and many more.

In the very beginning of the book, he flatly states that “this book is about the presentation of material, since the posture of that presentation–more than what is technically and literally expressed–dictates the meaning that is (eventually) contextualized by others.” That is where the pop culture icons come into play, but he doesn’t stop with real people. Along the way he talks about Snidely Wipelash and compares Batman to Bernhard Goetz. 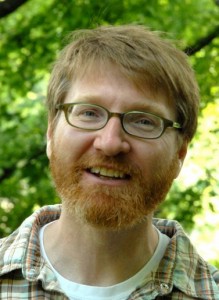 Of the many pop culture icons that could be villains he discusses the ideas that “merit is always a factor in someone’s cultural memory, but rarely the main one,” and how “it’s not the intelligence. It’s the calculation. It’s someone who views life as a game where the rules are poorly written and designed for abuse.”

Klosterman takes us along in his mind as he meanders from “pop’s truest aphorism: ‘To live outside the law, you must be honest,'” to “…the level of villainy should mostly come done to motive…” to “why are the qualities we value in the unreal somehow verboten in reality?” He explains how “if you act nice, you’re nice. That’s the whole equation” and goes to the other side with “until proven otherwise, we just accept goodness at face value. But this is not how it works with badness.”

In examining villains he finds that “nothing twists and obscures day-to-day human existence as much as physical attraction” and that “the way people look is so central to how we live (and how we respond to interpersonal conflict) that we’ve managed to collectively underrate its importance.” 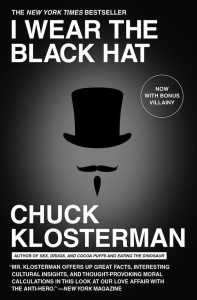 All of these points can be related to villainy as Klosterman has done, but these thoughts and morsels of  truth or observation (if you wish) are not limited to villains. Klosterman also exposes “the reason behind everything always has to be something else entirely,” a thought that has kept me awake on more than one occasion, and a bit more-so since I read it in the book.

In truth, it’s Klosterman doing what he does best: using cultural events to fuel essays that make you think. It’s Klosterman being Klosterman. He’s on point even when he isn’t.

I read a paperback copy of the book that I purchased at an actual bookstore (I know, right?), which contains the graphic “now with bonus villainy.” This is the truth for all Klosterman books, as there usually is a little extra in the paperback versions of his books.

If you’re a Klosterman fan and haven’t picked up a copy of I Wear the Black Hat: Grappling with Villains (Real and Imagined) I urge you to do so. If you aren’t already a fan, this book could be the one to convert you, although the same can probably be said about some of his other books like Sex, Drugs, and Cocoa Puffs and Eating the Dinosaur. 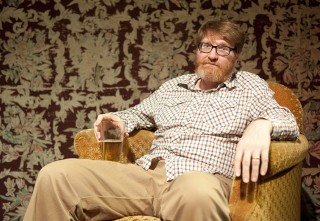 Mr. Klosterman Relaxing with a Beverage

Black Hat is similar to Klosterman’s other works in that they are easy to read, but not fast reads and Black Hat is no exception. There are concepts, thoughts, and observations recorded in this book that will make you think. This book is literally full of thought-provoking lines, paragraphs, and stories.

So it’s classic Klosterman (say that five times fast) and yet it is new content, new concepts, and a plethora of new thoughts that will be provoked by the words of Mr. Klosterman. It’s good and not just because it is good at face value, but because it actually is good, excepting that it may be great… I suggest you read it and decide for yourself.

Read the Secret File of technical information and quotes from I Wear the Black Hat. 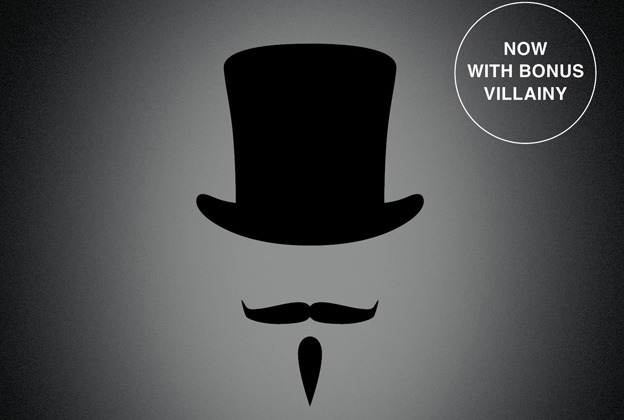 Fame and fortune are coming your way.
Good clothes open many doors. Go Shopping.
Even the greatest of whales is helpless in the middle of a desert.
More Fortunes >