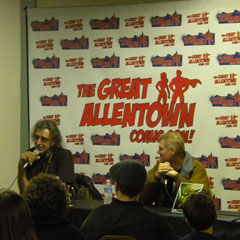 Day 2, my return to the Great Allentown Comic Con 2011. In my mind, and apparently in many others, there was an anticipation at arrival of noon to come. Because at noon, Mr. Peter Mayhew, Chewbacca himself would be speaking on a panel with Tom Kane, the voice of Yoda in Clone Wars.

The room was packed, or at least for a con of this size, and compared to the panels that I attended on day one, that would be an accurate account of the attendance. And in walks a man towering over all of us seated, in wait. Although to be fair, he would be towering over us if we were standing up, too.

After brief introductions, the floor was opened to questions and off we went. Peter told us stories, that is after all why we were all here, stories of doing all of his stunts but one in Jedi atop a walker, and of Uncle George (that’s how he refers to George Lucas). One question in particular about if he was allowed to keep any props was answered laughingly by Mayhew stating simply, “Props, No. It’d be like trying to get something out of Fort Knox, Uncle Georgy has them all.” 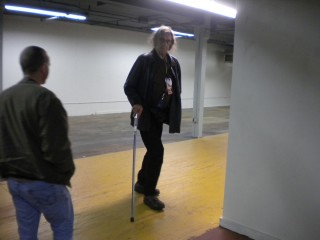 Not to be outdone, all though very undersizes, Tom Kane, got the most applause and laughter simply by doing what voice actors do best. I was happy as a fanboy can be when he told stories of some of the great voice actors he’s worked with, greats like two of my favorites, Maurice LaMarshe and Billy West. I do love me some Futurama!

Mr. Mayhew did say something worth remembering, or at least something of grand substance, “Life is not always great, but it can be rewarding.” That will stay with me for a while. On his way out of the panel, I got a nice shot of Chewy leaning on his lightsabre walking stick, a gift from a fan, one of many.

Coming down of a high from listening to a giant within the Star Wars saga and the voice of today’s Yoda, would be easy. This is comic con after all. On day one I had scanned the works of Tommy Castillo and today I was ready to purchase one. A wonderful print of Malificent, arguably the greatest of all Disney’s villains, which he signed for me (added bonus).

All in all, my trip to comic con was under budget and packed with fun. My loot, my spoils from the search for treasures left forgotten (maybe too dramatic a sentiment) in long boxes, netted me not only a few childhood memories but some great comics, I’m sure I’ll review for you later.

If you’re in the area, whether you’ve been to the big one in Philly or you’ve never been. I urge you to go. It’s well worth it, and at the very least, you’ll always be able to find that gift for the geek in your life.

The path of life shall lead upwards for you.
Even a broken clock is right two times a day.
Even the greatest of whales is helpless in the middle of a desert.
More Fortunes >