Rotospective: This Ain’t Bebop is about Reflection Inspired by Jazz, Beatniks, Kerouac, and Brooklyn

In 1989, Ralph Bakshi submitted “This Ain’t Bebop” to PBS’s Imaging America anthology, consisting of four shorts. The whole short is based around one man, played by Harvey Keitel, trying to reclaim the life he once had. It’s origin lies in a poem recanted throughout the short, which was written by Bakshi himself.

The poem influenced by Kerouac, jazz, beatniks, and Brooklyn is as follows:

[As a note, I reached out to Ralph Bakshi and his people for a copy of the original poem. Unfortunately, they “have no idea where that might be. It was written in free verse, each thought on a line, no paragraphs.” So, to the best of my ability, here is the poem.] 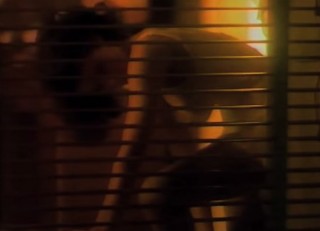 “stalling my young life staring at the girl across the way.”

On to the film, where the first lines in the movie by Keitel are the poem in full, recited while he’s playing a solo game of billiards. With the poem and the game completed, he moves to the bar for some reflection on his adolescence, “stalling my young life staring at the girl across the way.”

We then catch a glimpse of the narrator, presumably as a teen, sitting in a diner, smoking cigarettes and drinking coffee, thinking and talking with friends. In the midst of it, we hear the line “What’s wrong with thinking? Separates us from the animals,” which seems very relevant, even now.

Moving on, back at the bar with his thoughts, our narrator quips, “I got Brooklyn married, fathered out, jobbed out…”

Finally, retiring from the bar, he delivers a lonely admittance. “Now, I finally drive the night looking for relief, but the women always stay in the shadows.” The nice red mustang he pilots is a strong artistic choice that fits Bakshi’s usual great taste in cars throughout his films. 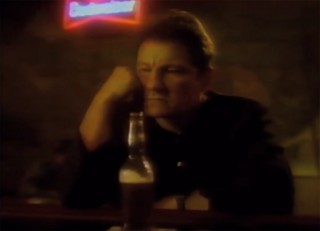 Harvey Keitel in This Ain’t Bebop

For a while he follows a woman, before driving away with a bit of additional self-reflection; “I remember when Kerouac rode the highways and wild nights, radios… while Pollock was painting, while I stared at Diane Arbus… Coltrane played for himself. People listened. PEOPLE LISTENED!”

At this point, the poem is reprised by Ron Thompson in a beatnik bar to its completion. The juxtaposition of differences between Keitel’s and Thompson’s recitations are not to be overlooked and could even be considered haunting. The beatnik scene is followed by still photographs of jazz legends flashing on the screen and a scene of Jackson Pollock painting.

We return once again to Keitel in the car, who has turned around to find the woman he was following before, and he picks her up. 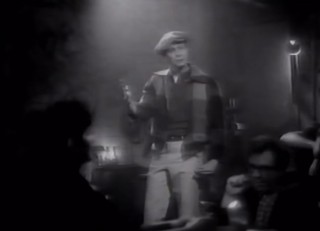 The poem is reprised by Ron Thompson

Back in his car, he returns his thoughts to reflections, and in them a blonde woman smoking a cigarette goes on quite a monologue. “Not a question of art for art’s sake, it never was. It’s a question of believing that freedom from community is why we were born, to be, to see, to burn in the only way that we know how. To dream that dream… you die another American disaster…”

The first line of the poem is reprised a third time, “It’s part of my disgrace to offer my race something to think about,” before the film cuts to a 1950’s reel of suburbian B-roll, with the narration of “it could be any street, any town, USA. Wherever you are, you’re probably part of a certain old fashioned home-bred spirit of, well, do you mind an old fashion word? … ” And then the film cuts out to reveal the words “The End.” 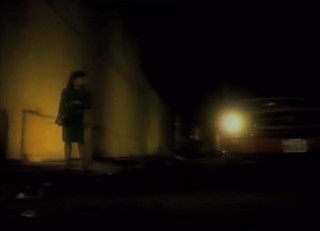 Picking up a woman from the shadows

It’s shot in a very dark and gritty way. Some of that, I would assume, is based upon the technology of the time and how it was recorded to YouTube, where it’s available of now for your viewing pleasure, but the other part is that Bakshi was probably going for a gritty feel to the piece.

“This Ain’t Bebop” came about for Bakshi after controversy cancelled his run of Mighty Mouse: The New Adventures and Nickelodeon scrapped a series he was working on called Junktown, although it did air the completed pilot as Christmas in Tattertown, which was the first original animated special created for Nickelodeon.

“Bebop” was the silver lining as, after all that controversy, PBS offered Bakshi $50,000 to direct a half-hour live-action film for their Imagining America series. Bakshi himself wrote the poem that served as narration and central point to the short. 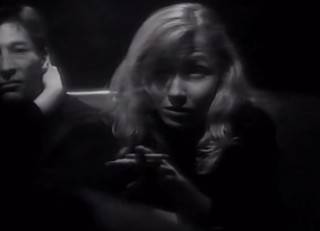 “Not a question of art for art’s sake…”

Bakshi said of Bebop; “It’s the most proud I’ve been of a picture since Coonskin—the last real thing I did with total integrity.” This was surely a rip of a quote by a man still bitter over the production issues from Cool World not becoming the film he intended.

In “This Ain’t Bebop,” Bakshi got the band back together, so to speak; the Beatnik poet reprising the main poem was played by Ron Thompson, who played and voiced the dual roles of Tony and Pete in American Pop; Rick Singer, who was Benny, Tony’s late father in American Pop, now portrayed Pollock; and it was produced by his son, Mark Bakshi.

“This Ain’t Bebop” is a snapshot of the America that was the free-thinking beatnik, thought-provoking, jazz-listening, decade of the 1960’s. In turn, it’s also a take on the 80’s American who was always looking backwards, never forward; an American who is trying to recapture what was instead of capturing what is or what could be… That’s something that is still relevant today. 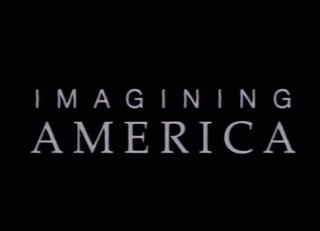 The New York Times called it, “a 22-minute homage to the beat generation that switches from a present in color to a past in black and white,” in their June 7, 1989 review.

I believe this short film is definitely a commentary on America; the one that was, the one that is, and quite possibly the one that will be. The future is always a head of us, whether we are looking forward to it or not.

To Bakshi personally, I can see why he’s most proud of “This Ain’t Bebop,” and why it means so much to him. And as great as his other films are, this stands out as a little more poignant and also gives more insight into the man behind it all. Bakshi was and is a man who was personally influenced by all the things that influenced the poem that this is based off of. He’s a man from another era, who’s trying to teach us something. And if we’re smart, we’ll listen to what he has to say. It may all be relative, but it’s all still very relevant.

Check out the other classic Bakshi films in my Ralph Bakshi Rotospective series.

“This Ain’t Bebop” was Written and Directed by Ralph Bakshi

Pollock was one of the inspirations for This Ain’t Bebop

This Ain’t Bebop Discussions in the Cafe

“I got Brooklyn married”

“Do you mind an old fashioned word?”

Read the Secret File of technical information and quotes from This Ain’t Bebop.

Let’s finish this up now, someone is waiting for you on that.
To let another into your heart, first let yourself in.
Fame and fortune are coming your way.
More Fortunes >