Ralph Bakshi’s Spicy City, produced for HBO, was a short-lived six-episode cartoon series aimed at adults. It is further proof that Bakshi is more than just a legendary animator; he’s also a trailblazer.

HBO called Bakshi in response to Trey Parker and Matt Stone’s video Christmas card Jesus vs. Santa, because HBO saw an opportunity to launch the first animated series that would be specifically targeted toward adults. It premiered in July 1997, beating South Park to TV by over a month to become the first “adults only” cartoon series. The series was a science fiction anthology series set in a futuristic city.

Each episode is introduced at The Roost, a nightclub with the hostess, Raven, acting as narrator. 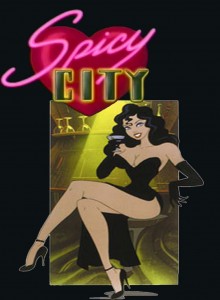 Bakshi enlisted his son, Preston, as well as some rough-edged writers, to create this futuristic world and the detective stories therein. “We’d have story meetings at dive bars and I’d give notes over shots… Writing doesn’t have to be formal. It’s gotta be organic and real! Every writer was different — Puerto Rican, black, Spanish, gay. They were poets and novelists living the tough life. I wanted perspective! Each guy had a unique sci-fi take based on their roots,” said Bakshi.

At this point, and despite great ratings, HBO wanted to reign in Bakshi’s writing team. “They wanted to hire a bunch of professional L.A. screenwriters who didn’t know shit about the kinds of stuff we were trying to put on screen,” Bakshi has said. “They didn’t live it, but my guys did. My guys were fucked up, bruised, and beaten to shit because they had to wash dishes to make a buck. They wanted me to say, ‘Hey guys, we have a hit show, but I’m firing you anyhow.’ But I wouldn’t do that to my guys, so they pulled the plug.”

The series is classic Bakshi, a throwback to adult animated films of his past including Fritz the Cat, Heavy Traffic, and Coonskin. We’re talking about language, sex and nudity, and graphic violence. In truth, it’s television animation as only HBO and Bakshi could do it. But there’s also some real heart to the series, specifically episodes one and four, which is something that some might be surprised to find in all of Bakshi’s works.

Episode One is a very interesting take on digital dating and the Internet, especially in hindsight when you consider that it was released in 1997. It is also apparent in each episode that the world of Spicy City, whether consciously or unconsciously, borrows heavily from the futuristic world of Harry Canyon from the 1981 Heavy Metal film, which has often been erroneously credited to Bakshi.

Raven’s final sentiment in the first episode is that, “It takes a true connection to spark in each of us that special glow… Some say it’s a delusion, a digital dream, but is it always the masquerade it seems or could it be a brave new world, where people are judged only by the beauty of their character?” 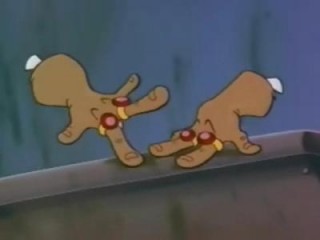 Episode Two is about Mano and his missing hands, which are chopped off at the start of the episode. Not only are there some amazing animated scenes with the rogue hands in a sausage factory, but Bakshi and his talented team gave the rogue hands raw emotion. And to top it off, the episode ends with such a twist that it remains one of the best of the series.

Episode Three is about a May-December romance, which “always break(s) my heart,” says Raven at the start. We follow the main private investigator as he uncovers cloning and a conspiracy. Moving to Episode Four we learn about a crooked cop in an episode full of conspiracy and heartache.

Episode Five is another standout, with Raven setting us up from the beginning. “They say that romance has become a lost art, but art only gets lost when it becomes hard work. Nowadays machines do all the work. That makes men lazy. Could it be romance is dead because it’s too much work not to be primitive? Too bad machines can’t do the work of romance, but can anyone love a machine?” Afterall, it’s a tough beat for a real live hooker when digital sex is all around.

The episode ends with one character saying, “You look at anybody anywhere in this town, and tell me where the human ends and the machine begins. Everybody’s so plugged into machines that there’s no difference anymore…” 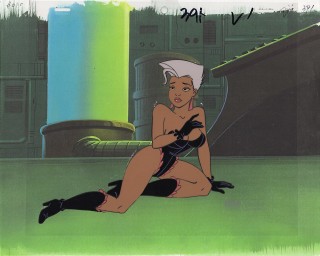 An animation cel of Virus from Spicy City

Who knew how right the writing staff would be way back in 1997 with the current advent of the smart phone and other connected technologies.

Episode Six, the last one in the series, features our lovely hostess Raven and ATC or “AlternaCeuticals; a medical research company in search of cures for an imperfect society. Our focus is the source of disease and our goal is to eliminate the bad elements and reach a final solution.” ATC is, at its core, an evil corporation bent on eugenics and the mass destruction of all things with any trace of mutant DNA.

And in true Bakshi fashion, the series ends with thought provoking dialogue as Raven says, “Is anyone really safe these days? These corporations and cartels, are they solving our problems or creating them? You know what’s true? What’s real? Your own thoughts may not belong to you. The seemingly innocuous thing, a sneeze can change not just the present and the future, but the past, as well.”

This six-episode series is truly a complete work of art that should be watched all the way through. The art backgrounds have a certain Cool World flair and as a Bakshi fan, it’s always a pleasure to pick out which characters Ralph Bakshi is actually voicing. He becomes three of them in the series. 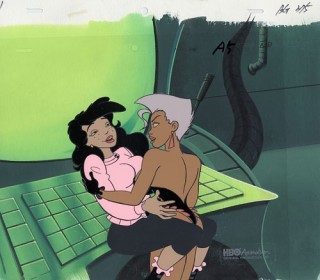 An animation cel of Virus and Nisa from Spicy City

But there’s more trailblazing, or at the very least leading, that came out of Spicy City. It was one of the first series to have a short season, something that is starting to become more commonplace via streaming services opting for 12- and 13-episode seasons, instead of the standard 23 that we’ve seen on the small screen for so long.

But above all else, it was the first “adults only” animated television show and its success, along with that of South Park, has paved the way for countless other “adult only” cartoons.

The critical reaction was mixed despite solid ratings. The Los Angeles Times called the series “Adolescent Humor for Adults” while The Dallas Morning News said the series “exploits the female form.”

I would be lying if I said I didn’t want more, but I’m happy with what we got and what was created with Bakshi and his writing team. A second season would only have been good if the formula remained. So, it’s a good thing that HBO pulled the plug when Bakshi walked on the strength of his convictions for wanted to keep his writing team in tact.

Once again, Bakshi proves himself to be a larger than life figure capable of creating thought-provoking entertainment that’s dirty and has heart.

Even a broken clock is right two times a day.
Whoever wants to reach a distant goal must take small steps.
Courtesy is the password to safety.
More Fortunes >