Ernest Cline does it again with pop culture-filled ‘Armada’

With Armada, Ernest Cline is back to his old tricks: creating a story in the universe of his own creation where the geekdoms and pop culture of our current reality coexist.

This time Zack Lightman, who prefers video games to reality, sees an alien ship right out of his favorite game Armada, a flight simulation where games protect earth from alien invaders. As implausible as it seems and despite Zack’s self diagnosed psychosis, what he is seeing is real. That moment “will force him to question everything he thought he knew about Earth’s history, its future, even his own life–and to play the hero for real, with humanity’s fate in the balance.”

First up, I agree with every quote on the back of the paperback copy I read. 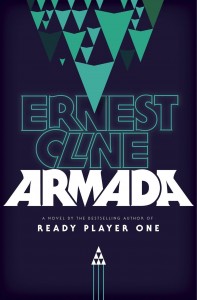 Second, this is only Cline’s second novel but I feel confident in saying that it is “classic Cline.” To borrow from The Breakfast Club, as Cline borrows from so many movies, “in the simplest terms, in the most convenient definitions” Cline is a writer who does what we, as geeks and nerds, all want to do. We want to write stories with the references that inspired us, in an original way.

I’m not saying there aren’t tropes within Armada, but for all the borrowing, referencing, and homage-paying within its pages, Cline manages to create a wholly original story that is as captivating as the pop culture references found on virtually every page.

The thing you have to understand is that this book, along with Ready Player One, are books that most geeks would love to have written ourselves. Both have heavy pulls not just in passing reference but in actual borrowing from the movies, music, and video games of our youth. 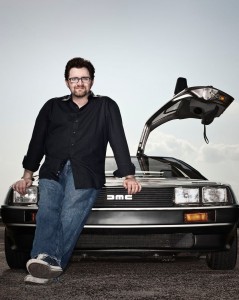 Ernest Cline and his Delorean

I find this extremely refreshing. Sure, I am one of the many true believers that is jealous that I didn’t think of it first or complete our manuscript or even have a good idea beyond the concept, but we’ve all thought of it. Honestly, it’s a book many of us would have wanted to write but ultimately didn’t. Ernest Cline has now done it twice.

I applaud the man for doing what he does, and I hope he continues to put out novels just like this: full of equal parts of the pop culture that I grew up with and his own unique energy. For my part, specifically with Armada, I can’t help but picture Zack Lightman as the only other “Lightman” I know from popular culture – Matthew Broderick’s lead character David Lightman from “Wargames,” a movie which is also referenced within this book on more than one occasion. But that’s just me.

Read the Secret File of technical information and quotes from Armada by Ernest Cline.

A difference, to be a difference, must make a difference.
Let’s finish this up now, someone is waiting for you on that.
Even the greatest of whales is helpless in the middle of a desert.
More Fortunes >