Field Report: An Infiltration of the Great Allentown Comic Con 2012 | Some things just can’t be replaced. 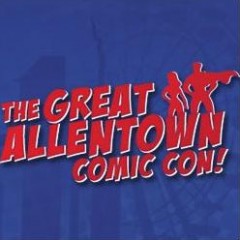 I recently infiltrated the Great Allentown Comic Con in the city’s Merchants Square Mall. The attendance was not what it had been in the past and there weren’t quite the number of dealers that usually show up, but that can be attributed to the beating this and surrounding areas had taken due to Superstorm Sandy and the Nor’Easter that dumped winter weather in New Jersey.

Attendance aside, the atmosphere was upbeat – how could it not be with a room full of comics!

That is, after all, part of the allure of a comic book convention (one of three, in my opinion). I thoroughly enjoy searching through long box after long box of comics looking for things that are new to me or looking to add to my collection in general. 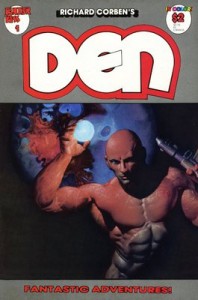 I was extremely pleased with my recent haul including issues #1, #7 and #9 of Richard Corben’s Den (look for a review of the series soon).

Another of the three allures of a comic book convention is talking comics or just talking geek. Both are spoken freely and fluently at a con. It remains, as it always was, a subculture that will never be permeated by the outside threats of big budget blockbuster movies. Contrary to popular belief, comic sales don’t get a huge boost when a comic book movie becomes a blockbuster. All that results is that the general populace gobbles up merchandise and wears it proudly.

This can be very frustrating for those within the comic and geek subcultures. Because of the widespread appeal of movies like “The Avengers,” you can no longer safely assume that the girl or guy wearing the Captain America shirt knows any more about the character than he or she learned on the big screen.

It used to be a sign. It used to be like the story of Passover. The Angel of Death passed over the houses that were marked, and to bring it back around, those in the subculture used to be able to spot each other by a Spider-Man or Wolverine shirt.

This is no longer possible.

Mainstream pop culture has taken this fashion as its own, and outside the space of a con, there are no safe assumptions about what a “fan” actually knows. More often than not, it’s easier to assume and more likely correct that they simply enjoyed the movie. 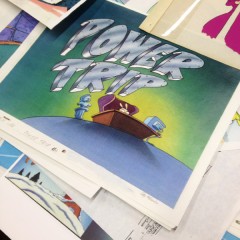 The third allure of the con is meeting the people behind the scenes. Artist booths populate cons for fans who are more than happy to buy their art, ask for their signatures, or just chat with them. I recently met two well-known individuals.

Artist and animator Cotty Killbanks had her very own booth. Killbanks has a studio in nearby Easton, Pa., and is more than happy to talk about everything she’s worked on. It was great to hear her wax poetic about moving from Disney to “Rocko’s Modern Life,” where she had to transition he style from precision to playfully skewed. She is also very passionate about passing along art. You can’t talk to her for more than five minutes without being swept up in her passion.

I also had the please of meeting artist Darren Auck. He has worked on many things from the Rocko’s Modern Life and Ren & Stimpy series of comics to Hulk and Wolverine. He’s a veteran of the industry and has worked for a plethora of publishers including DC and Marvel. Darren and I spoke about my favorites: Richard Corben, Ralph Bakshi, and Heavy Metal Magazine. 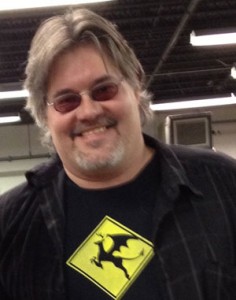 I told Darren that I don’t buy new Heavy Metal magazines, just old copies from before the magazine went completely digital. He agreed that computer generated and digital art lacks something. Through the course of our discussion, I mentioned that the older comics, magazines, and cartoons were more, organic, for lack of a better term, and he agreed.

Throughout my conversations, both artists emphasized the importance of actually drawing. Regardless of what the industry standard may be and how far it may get from organic art, the foundation of putting pen to paper is fundamental.

Take for example my conversation with Darren. The entire time we spoke, he kept adding to the sketch he was working on. He didn’t ignore me and actively kept his end of the conversation, and although eye contact is important, I couldn’t help but watch.

I may consider myself somewhat of a graphic artist, but I don’t quantify myself as an actual artist. However, as a consumer of art, I know organic art resonates deeply with me.

After all, the cartoons and comics I grew up with were organic. The backgrounds and cells, the pages and the text – it was all done by hand. Circles may not have been perfect, but they weren’t imperfect either.

Don’t take this as an assault against the digital system. It’s here to stay: it’s cheaper and allows for a faster creation of media. Thus for consumers, there is infinitely more media to consume. I will always have a very high respect and fondness for organic art. Even the digitalization of Bakshi’s rotoscoping was organic: there was a grit to it that captivated me then as it does now.

Some things just can’t be replaced.

Today it’s okay to make a few choices by going with your instincts.
Look forward to great fortune and a new lease on life!
Nothing in the world can take the place of persistence.
More Fortunes >