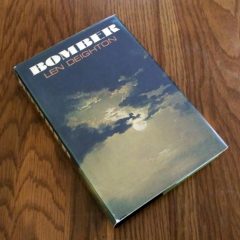 “Len Deighton, the mastercraftsman of spy thrillers, here applies his eye for stunning detail and his story-telling skill to the novel of action. With documentary precision, he has created a powerful panoramic account of a bombing raid over the Ruhr during World War II. And in the process, he has written a devastating indictment of war and of the mechanical processes – in man and society – that perpetuate it.”

That’s the first paragraph on the inside dust cover of Bomber by Len Deighton and it is a perfect description of the book. There’s no use in keeping this a spoiler-free review, as it is about a World War II bombing raid. It takes place over 24 hours and although I will talk about some of the details, it’s those details in the characters, their personalities, their relationships and their machines that make the story intriguing on both sides of the battlefield.

The setup with all the characters and locations is a place where the little forgotten details of the war are described beyond the dropping of bombs and the shooting of guns. But in those bombs and bullets of the battle itself there are also forgotten details, that Deighton dares bring to life.

We sometimes forget in the history books that those brave souls on each side fighting for their cause are mere pawns to other men’s schemes. Early conversations by characters reveal such truths in dialogue such as “… there’s no difference between bankrupting a foreign factory in peacetime and bombing it in wartime. Capitalism is competition and the ultimate form of that is war.” and “I believe that everyone is corruptible and I’m always afraid that I might become corrupt. I believe that all societies are a plot to corrupt the individual.” 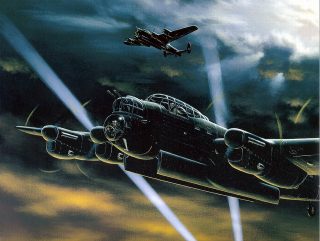 Painting of a Lancaster Bombers

And one of the characters even points out these missing pieces of historians and their research by stating, “There is a common mistake made by historians: to review the past as a series of errors leading to the perfect condition that is the present time. It’s a common mistake in life too, especially in one of our closed societies like a school or a prison camp. It’s easy then to forget that the outside world or future time exist…”

The fact that Deighton is only covering one bombing raid for 24 hours, and all characters from both sides, as well as, bystanders who are thrust into the line of duty to protect their own, allows for the master story-teller to example details of the human spirit, both in triumph and defeat.

Deighton writes of “a neurosis of a kind that comes from being asked to do something beyond one’s mental and physical capability. Life had got out of control.” Going to broaden the scope saying that “There were many symptoms of this neurosis, and for some survivors it was the beginning of a mental breakdown from which they would never recover.”

It was a visit to an airfield, similar to the fictional Warley Fen that Deighton created for the book, where in the Epilogue he wrote “Only the control tower is in anything like its original condition, although if you ascend the iron staircase be careful. You might end up writing a book about it.” 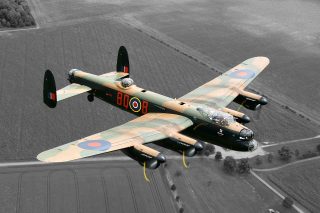 Photograph of a Lancaster Bomber

And he did write a book about it. One that is a brilliant read and thrill ride of literature that Deighton is most suited for creating.

Another note on this book of fictional history is that the book itself has a history all it’s own. He writes in the Acknowledgements that “This is perhaps the first book to be entirely recorded on magnetic tape for the I.B.M.721V. This has enabled me to redraft many chapters over twenty times, and by means of memory coding to select certain technical passages at only a moment’s notice.” And by all accounts it was definitely one of the first. But that is another story for another day.

For now, take my word that if you’re interested in history, World War II, aerial combat, or just great storytelling, this is a book you should be picking up.

Read the Secret File of technical information and quotes from Bomber by Len Deighton.