Atticus is a moving story that doesn’t just move, it runs to its conclusion in the best possible way, with a reluctant protagonist, shapeshifting aliens, and more antagonists than you can shake a stick at.

The world that J.B. Manas has created in Atticus is not too far from our own. Government cover-ups abound because, as hinted in the book, there’s plenty we don’t know about. And the characters aren’t perfect: the main and side protagonists aren’t without their faults, and those who stand in their way are at times likeable and relatable.

So what makes this story move as fast as it does? It’s just written very well. Not all great stories require the detail of Tolkien or Michener. That’s not to say Manas has no detail – far from it – but he wields words like a master storyteller, not giving away too much while still giving you the complete picture.

As it says on the back cover, “Suspended for negotiating with an armed lunatic, rookie cop Marti Coldwater is feeling lost and unappreciated. But her day is about to get a whole lot worse when her car is run off the road by a strange, falling military craft and she rescues the lone passenger—a young British amnesiac who thinks it’s 1944.

Soon, she and her newfound companion are relentlessly pursued by government agents, a sinister Nordic assassin, and a race of Earth-dwelling extra-terrestrials.

When she uncovers a plot threatening the entire planet, her only hope of saving the world is to try to recover the memories of a man who may just want her dead—the man who calls himself Atticus.”

And yet, it’s not far-fetched science fiction. It’s just solid fiction told with a foundation of truth. The dynamic relationships between every character in the story are hardly superficial. You understand that they either have a past, they’ve been through some shit, or they’re trying to figure each other out while still moving forward. 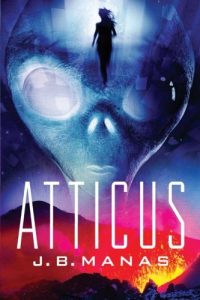 I’m all for a “slow burn” if you will, but a story that just gets right to the meat of the plot and jumps right into the pool without dipping its toe in and second guessing itself is a story I will always enjoy.

But at the end of the day, without giving anything away, the most poignant piece of dialogue comes from one of the Klaruvians, the aliens in the story, who says with outsider’s eyes, “We all know the struggle for good is universal, and not just here on Earth. We’ve tried ourselves, many times. We’ve failed many times. So have the humans. Evil and violence always find a way, but that doesn’t mean we give up and give in.”

With a story based upon not giving up or giving in to evil and violence, Atticus is not only brilliant, it’s a timely read, as evil fills our social media and the struggle for good seems hopeless. It isn’t. I’ll repeat, “Evil and violence always find a way, but that doesn’t mean we give up and give in.”

You’ll want to pick up Atticus as soon as you can. It’s a wonderful read that you may just get done in a day or two, because it truly is just that hard to put down.

Read the Secret File of technical information and quotes from Atticus by J.B. Manas.

Sharing little joys offer great hope to others.
To let another into your heart, first let yourself in.
Even a broken clock is right two times a day.
More Fortunes >