Declarations of War by Len Deighton: Classic Deighton but Shorter 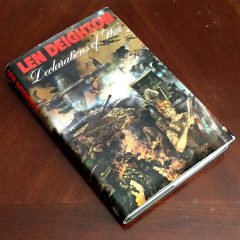 Declarations of War is a collection of short stories; 13 to be exact, a baker’s dozen if you will. Of, exactly what you would expect, war… But the title goes deeper. Each of these short stories contains a declaration about war. But that’s not as good of a title, though it could be argued that these stories are declarations on war, which makes sense despite the fact that my spell checker thinks “declarations on war” was a mistake. No, I meant it.

And like Deighton’s full size novels, I’m basing this off of the one’s that I have read. this story is a wealth of great intelligence in storytelling, dialogue, and of course, precisely written descriptions and detail.

As I do for every book I read, I pull quotes or dialogue, sometimes they are poignant, sometimes not. But in the case of this book, there are an abundance of quotes that struck me as worthy of notation.

First, what is wealth? Well… Stephens thinks its energy, while Wool thinks it is time.

‘Wealth is time…. It’s the only thing you can’t buy, apart from good health,’ said Wool.

And when was the last time you heard anything described so clearly with words that you know, but don’t see very often; “The lower windows were shuttered, but the upper ones reflected the bleached sky, their grimy panes glinting dully like fake diamonds in a pawned tiara.”

For me it doesn’t matter who you agree with, both make compelling arguments. I’ll let you make up your own mind. And then comes another conversation that makes me believe Deighton regarded himself as a much more highly skilled writer than others, with this passage on “deus ex machina” as a shot across the bow of those writers he found inferior regardless of medium;

There was a long silence. Gerrard said, ‘You’re looking for a deus ex machina.’
‘I don’t know what that is,’ said Brent, his flat voice indicating that he had no curiosity about it.
‘It’s a device that writers use for making their plots end well.’
Brent grunted.
‘An improbable device,’ added Gerrard, ‘for bad writers and unlikely plots.’ 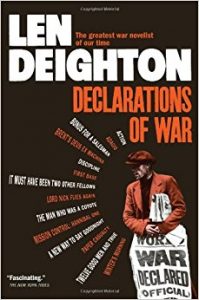 Declarations of War by Len Deighton

But there are more to my highlights than mere discussion points. Deighton makes some very strong statements about war, that is after all, the theme that ties all of these stories together.

“Only half an hour ago he’d been sure that you can’t kill a man with a sheet of paper; now he wasn’t so sure.”

“‘…It’s tragic the way government after government ignores the warnings that the experts give them.’”

“Both armies were ardent novices, stumbling about in confusion and dying by the hundreds because they didn’t know enough about war to know it was time to run away.”

Before I move on, the coup de grace of his declarations of war;

“When old men decided to barter young men for pride and profit, the transaction was called war.”

It’s not like he’s just some third party… Deighton was born in 1929 and this means he was 10 when the war started and he did spend some time in and around the Royal Air Force, flying Mosquitos and Lancasters, among other things. So he’s a man who knew of it, lived through some of it and more importantly heard stories from those around him.

And it was probably those stories, and listening to the lot around him that arrived him at the passages I will end with;

“‘There’s too much to do to waste time hating half the world,’ I said. ‘Too much to build, to mend, to discover. We should have been working together all this time, instead of the two halves of the world rattling swords at each other.’” 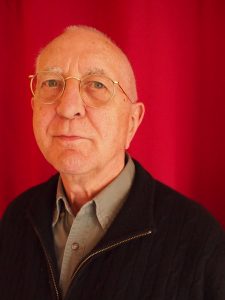 “Palmer had a Mons Star and had fought from 1914 until 1918. He was a quiet man who said everything in the tone of doleful prayer. Strange, thought Brand, the varying effects of war upon man’s character. It made some men into maniacs and some into monks,”

This obviously is not a book for everyone, but if you are a history buff you have to pick up this book. It isn’t hinged on just one war time or conflict, it goes all over the world on sides of conflicts and of conflicts that don’t always get much attention. It contains some generals and higher ups, but it doesn’t completely hinge upon them.

Sometimes the stories are in the heart of the action, and sometimes they are in the preparation for or transportation to or away from battle. Sometimes it is so far removed from battle, you may forget that war is upon you. Honestly, if you enjoy history, go and pick up Len Deighton’s Declarations of War.

Read the Secret File of technical information and quotes from Declarations of War by Len Deighton.

Look forward to great fortune and a new lease on life!
Fame and fortune are coming your way.
Even the greatest of whales is helpless in the middle of a desert.
More Fortunes >