In: Comics, Media, The Written Word

Have you seen the trailer for Atomic Blonde starring Charlize Theron? Looks good right? It does, but I wanted to take a dive into the source material, because I’m that guy. So I picked up a copy of “The Coldest City,” a graphic novel, by Antony Johnston, and without spoilers, here’s my review.

In stark black and white the reader is inserted into a debriefing of British officer Lorraine Broughton, being interrogated on what recently happened in Berlin. Her superiors questions will lead her and the reader into an interesting flashback mechanic: while the present tense interrogation happens on black bordered pages, the playback, as it were, is on white bordered pages, which is a very subtle, yet brilliant detail.

The setup is simple. MI-6 sent Lorraine, a veteran operative, is sent to recover a list in Berlin. She receives her orders on October 28th, 1989 and is in Berlin before the end of the day. This is an important note, because although this has been deemed as an urgent assignment, she’s walking into Berlin a week before the fall of the Berlin Wall on November 9th, 1989.

She was also walking into a brewing chaos amid clandestine agents. Multiple countries have agents in Berlin at that time and tension are high, as the wall is sure to fall. They just don’t know when, nor do they have any idea what impact it will have on them. 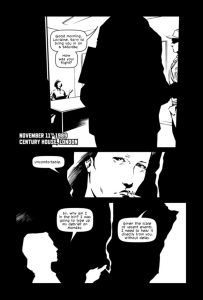 Now as a tangential history lesson, the Berlin wall was constructed in 1961 dividing East and West Berlin physically and ideologically. Though it only stood for just over eight years, it was part of a focal point for intelligence during the “Cold War,” and that part of the history, despite being the backdrop for this piece of fiction isn’t lost on me, and it shouldn’t be taken too lightly by any reader, especially younger ones who don’t remember the wall.

So back to the graphic novel. The back cover sets up what I told you, but I’ll reiterate with the author’s words.

“As Communism collapses and the Berlin Wall crumbles, an undercover MI6 spy is killed while carrying priceless information — a list containing the name of every spy in Berlin.

MI6 sends in veteran operative Lorraine Broughton to recover the list. But she walks into a powder keg of social unrest, counter-espionage, defections gone bad, and secret assassins…”

Since, all of that is on the back cover, I feel comfortable getting into more of those details, because this is a spoiler-free review, so anything on the cover is fair game.

A list of every spy in Berlin? Yes, that’s the missing piece of intel that has MI6 more concerned than a dead agent, and why shouldn’t it? With or without the impending fall of the wall, that kind of intel or a list of that magnitude would be worth a lot more to most governments that five agents, and I’m talking five good agents.

And how bad does MI6 want it? Lorraine is told “I don’t care how you get it, who you upset, or where it takes you. Bring it home.” That’s how much. This one doesn’t need to be a clean job, it just need to get done.

Early on, someone says “some of them are saying there’ll be no more secrets from now on. But you and I both know that’s not true.” This is important because there will always be secrets, but those that might see the light of day in the newly whole Berlin, could be devastating to some interested parties. And when I say interested parties, I mean basically any clandestine operation with agents in Berlin. Those other secrets, the ones that remain, they’re the reason that well after the fall of the Berlin Wall and the end of the Cold War, we still have spies. 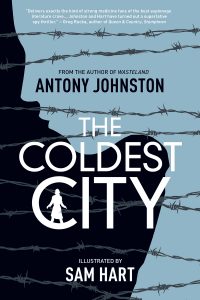 Despite being told in flashback, the twists and turns still make the book intriguing, while maintaining that the overall job of a spy isn’t always glorified, something that even in graphic novel form has a very Len Deighton-esque quality to it. I’ve read quite a few of his books, so I obviously feel not only compelled to make that claim, but qualified to do so.

And I sincerely enjoyed the book, my largest complaint being that it’s a short read and I would have wanted more from it. But I do have “The Coldest Winter,” the sequel Antony Johnston wrote after “The Coldest City” to read, so I’ll be going back to that world very soon.

Now I’ll also be watching Atomic Blonde. Do I believe that anyone interested in the trailer for the film rush out to pick up a copy of the source material? No. I do not. It’s obvious that the film takes liberties with the story, not that I have any complaint with the trailer, but it’s got a very “John Wick” style to it, and I can type here with a great amount of certainty that fans of John Wick will want to see the movie, but that doesn’t mean they’ll all want to read the graphic novel.

Because, and this isn’t a spoiler, just more of a warning, the book doesn’t have all that John Wick stuff in it. So, you’ve been warned. But I’ll suggest anyone who enjoys spy fiction, similar to what Len Deighton and Ian Fleming wrote in the books, will probably enjoy “The Coldest City,” even if it is, a bit short for my tastes.

Welcome to the Librarium: Bill Sweeney and I review and breakdown The Coldest City. Listen Here.

Read the Secret File of technical information and quotes from The Coldest City by Antony Johnston.

Nothing in the world can take the place of persistence.
Even a broken clock is right two times a day.
Today it’s okay to make a few choices by going with your instincts.
More Fortunes >