When published, the concept of extremely far reaching advertising probably seemed like science fiction, but reading this now for the first time in 2017, it doesn’t feel so far off.

The two books seem to belong together in this hardcover tome. They are two sides to the same coin. Not that they couldn’t be separate entities, but they work so well together.

First we follow Mitchell Courtenay and next we follow Tennison Tarb. Although both are challenged with circumstances beyond their wildest dreams, they are perfect characters in their imperfections. 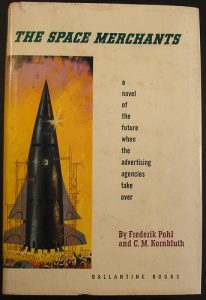 But between the two, one major takeaway from the world of both books is that advertising has become the law of the land. It’s the Alpha and Omega. It is everything.

Built into all of this, beyond the powers of advertising, is a class system as well. The whole thing is very interesting, especially considering that it was first published in 1952.

The premise of the first book The Space Merchants is simple enough. One advertising agency, Fowler Schocken has received the Venus account, which is what you expect, the account that will send humans to Venus for colonization. There is another agency Taunton Associates that is upset that they didn’t get the Venus account and lastly there are the “Consies.” Conservationists that believe all of the advertising agencies are ruining the planet.

As much as The Space Merchants is about advertising agencies ruining the planet, The Merchant’s War is about ruining two; as Venus is successfully colonized in between the two books.

Where Courtenay is the foil for some things in the first book, Tarb is the foil in the second; as both books are written from their perspectives.

In the world of both stories, business is business and for those at the top, control is the name of the game. Sound familiar? We aren’t yet beholden to advertising as established in these pages, but as I stated earlier, it doesn’t seem all that far off for a sci fi book. Although the colonization of Venus helps the reader remember that this is in fact fiction and we do still have more free will. 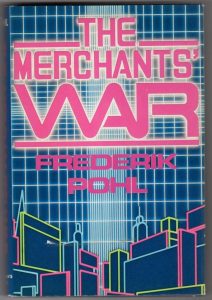 Tarb explains the power and control when entering one of the agency buildings as “Here was where Power was. The whole cast building was dedicated to one sublime mission: the betterment of mankind through the inspiration to buy. Copysmiths and apprentice word-jugglers; media specialists who could sound a commercial out of the ambient air or print a message on your eyeball; product researchers dreaming up, every day, new and more sellable drinks, foods, gadgets, vices, possessions of all sorts; artists; musicians; actors; directors; space buyers and time buyers–the liste went on indefinitely–and above them all, on the fortieth floor and higher, there was Executive Country where the geniuses who directed it all brooded and conceived their godlike plans.”

Can I categorically say this is a book for everyone? Probably not, but I would suggest if you have any interest based upon any of my prior comments that you do seek out this book. Give it a chance, because there is more than just a hint of truth, which makes both of these quality pieces of satire.

Exhibit B; what about fault? “When you come right down to it, I guess nothing is ever anybody’s fault, or anyway nobody ever thinks it is. You have to do what you have to do.”

Exhibit C; and the words that are used to sell products and ideas? “…it isn’t what a slogan says that matters, it’s what people can read into it that somehow touches the subconscious.”

Read the Secret File of technical information and quotes from Venus, Inc.

Your moods signal a period of change.
The path of life shall lead upwards for you.
Nothing in the world can take the place of persistence.
More Fortunes >