Close-Up by Len Deighton is a Authentic and Timeless Look at the Film World.

Close Up is about an actor, relationships, the film industry, and an author. It is an amazing fictionalized​ look into a world, when film was starting to reel from the expanse of television and the idea of celebrity in film stars.

Though it remains completely fabricated as a work of fiction from the mind of Len Deighton, there is no denying that some of the statements and inferences ring true, even today.

Now for clarification, Deighton makes sure to note in a small introductory paragraph that this is complete and total fiction; “In the recent past it has become fashionable for writers to us thinly disguised biographical material about ‘show-business’ figures, but I have not intended to depict any person, living or dead, or any film, institution or corporation, past or present.” 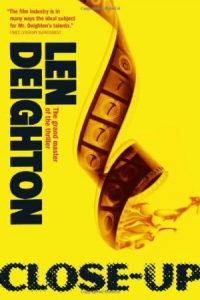 Alternate Book Cover of Close Up by Len Deighton

It’s all covered through many different perspectives. Marshall Stone, the main actor; Viney, his agent; Anson, a writer who is working on Stone’s biography and is married to Stone’s ex-wife; and Mary, a lawyer who is Stone’s ex-wife.

Aside from moving the story along, they all tell very different tales and give various insights into film making from each of their distinct perspectives. And while that encompasses a great deal of the book, every chapter and even some mid chapter breaks are accompanied by famous quotes of film icons from the Golden Age of Hollywood.

All of this makes this book quite an interesting read for anyone with the smallest amount of interest in film, from any angle. There is a lot in this book, different people will take away things in different ways at different times. But for me, I have two distinctly different classifications of takeaways from this amazing book; general generalizations and acting generalizations, but of course, you’ll want some examples.

The three general generalizations that stuck out most for me were:

“…oh well, espionage and show business have in common the tradition that everyone abandons you when you are in trouble.”

“I said nothing. The masterful inactivity that is the working method of doctors, interrogators and journalists did not fail me.”

“‘…The whole purpose of school is to teach us to put up with boredom, favouritism, discipline and lack of privacy. Parents don’t understand that nowadays: children allowed to run wild will be unhappy children.’”

While the acting generalizations that stuck out were:

“‘Actors—and, for all I know, actresses too—obtain this energy from what they call love but what the rest of the world calls praise and admiration.”

“There’s some kind of inverse square law that ensures that the richer, more powerful and more independent an actor becomes, so will the scripts he chooses be more feeble.”

“‘…Motivation is just the perspective.’”

“The ‘big break’ wasn’t the result of exhaustive research, contemplation or years of hard work; it was meeting the right man in the right place at the right moment. Because of the instantaneous result such human mixtures showed, the film world referred to it as chemistry.”

The thing is, there’s a lot more to this book than I realized. I don’t know if I feel like the description on Amazon.com does this book enough justice for what it is. The first paragraph of the first printing description on the inside flap of the dust cover more reflects my opinion of the book. “Close-Up is an astonishingly authentic view of the film world—where, as one character remarks, even the has-beens fly first class. The rituals, wheeler-dealer politics, and back-stabbing tactics of the riches industry in the world have never been more effectively portrayed.”

I couldn’t have said it any better myself. Do yourself a favor, and get yourself a copy. If you watch movies at the least, or want to get into movies at the most, this is a must read. Sure, times have changed, but some things are timeless, and Close-Up by Len Deighton is just that.

Read the Secret File of technical information and quotes from Close-Up by Len Deighton.

Sharing little joys offer great hope to others.
Courtesy is the password to safety.
Nothing in the world can take the place of persistence.
More Fortunes >