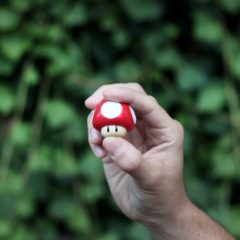 Every year on Dec. 31, people start contemplating what they’ll strive for in the coming year.

Yeah, sure you will, until the second week of January when you say, “Screw it,” and just wait to make the same resolutions next year.

Here is a list of the resolutions that most of us geeks have every year, only they aren’t resolutions, they’re goals!

Geek Goals (in no particular order):

Go to a big convention. I have nothing against small conventions. In fact, I really like them, but the pilgrimage to San Diego, New York, Baltimore, Denver and Texas, where our heroes can be found alongside rare books and collectibles – that’s something we all want to do. It’s what we save our vacations for!

Get that rare toy or collectible. Remember when you were a kid and played with Lion-O of the ThunderCats every day? Well, wouldn’t it be awesome to get that very same toy and put it on your desk? This is the year to find it. eBay, toy shows, comic conventions – there are a myriad of ways to track it down, and there’s no reason not to.

Rediscover something. Rewatch “Battlestar Galactica,” the original “Star Wars” trilogy, the first season of “Futurama,” or reread a book or a series of comics. We all have things that we are fanboys and fangirls of, so why not rediscover why we’re fans in the first place? You’ll be very happy to you did.

Discover something. As a rule, when I go to a convention, I find a comic that I don’t own about a character I’ve never read and I buy it. I go read it and maybe, just maybe, I’ll become a fan of something new. Or it could be that you want to see what all the Dr. Who fuss is about. So go on Netflix and start watching. There is nothing wrong with your fandom, but take a chance to see what the other fandoms are about. There’s no need to stop with statements like, “I like Batman.”

Reread your classic. I said “your” classic, not a classic. I’m talking specifically about the book that got you into reading. For me, it was a second coming of sorts. “The Hobbit” was the first book that got me into reading when I was 7, but it was when I was 17 that I read “Galilee” by Clive Barker, which got me back into reading. Grab that book of the shelf, dust if off and start reading. For those of you who have taken the technological jump, buy the e-book of your classic. Either way, you won’t be disappointed.

Be constructive. Yup. Build something. It doesn’t have to be crafty, but it can. Write that book because there’s no shortage of self publishing options. Build a model or create a T-shirt. I myself would like to hollow out a book and make a book safe. Those things are awesome! I know most of us work and some of you may even like the work your doing, but doing something constructive for yourself is very rewarding.

That’s it. That’s what most geeks strive to attain in any given year. It never changes. There’s always another convention, always something else to build, new things to discover and old things to rediscover.

This is what we do. Be a shark and keep moving forward.

Sharing little joys offer great hope to others.
Courtesy is the password to safety.
Look forward to great fortune and a new lease on life!
More Fortunes >