Spies work together; in teams, in networks, for organizations, and sometimes for themselves.

But what happens when one of two former associates is assigned to spy on the other? That’s what happens in Len Deighton’s 1975 classic Yesterday’s Spy.

Colonel Schlegel and Dawlish, both from former books of Deighton’s, make their return to his pages. The lead spy, Charles, is archetypal of Deighton’s other leads, such as Patrick Armstrong or the unnamed spy a.k.a. Harry Palmer.

Charles is tasked with “catching up” with former associate Steve Champion, and what follows is anything but boring. Although to give you a clue into the mindset of our lead character, Charles actually says “This is going to be a lousy rotten miserable bummer. I hate these jobs where we are shaking down our own…”

I won’t give away the turn or the ending, but there are four things that you need to know that make this book as brilliant as the rest. 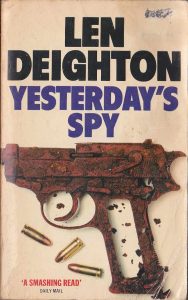 The first is a conversation Charles has with Champion.
“The days of the entrepreneur are over, Steve,” I told him. “Now it’s the organization man who gets the Christmas bonus and the mileage allowance. People like you are called heroes, and don’t mistake it for a compliment. It just means has-beens, who’d rather have a hunch than a computer output. You are yesterday’s spy, Steve.”

The second is a passage of Charles’ envy for Colonel Schlegel.
I envied him. Not only the ability to swim like a basking shark, but also for his jet-jockey readiness to press buttons, pull triggers and dive into the deep end of life, while people like me drown in indecision, imagined loyalties and fear. If Champion was yesterday’s spy, Schlegel was tomorrow’s. I can’t say I looked forward to it.

The third is a reverse of the first with Champion telling Charles, “You told me there was no place for hunches any more. So perhaps you’re the one who’s ‘yesterday’s spy.’”

All of these are very indicative of the 70’s when the intelligence community, as well as, intelligence itself and information were rapidly starting to change with the computer coming of age into a digital society. All of this leads me to my second point.

And that point is Charles as the lead is a wonderful master spy, but not the flashy kind. Well, what kind is he then? He’s the kind that has a lot of conversations and doesn’t do much talking. Case and point is a conversation he has with a policeman Claude, whom he knew back in the War, in this case World War II.

“We said you’d never last,” said Claude. “When you first appeared on the scene, we had bets that you wouldn’t last out.”
“In the war?”
“Of course, in the war. You had us fooled, Charles.”
“That makes two of us.”
“Touche,” he smiled again. “We thought you were too headstrong then, too direct, trop simple.”
“And now?”
“We soon learned that you are anything but direct, my friend. It’s unusual to find a man so ready to let the world think him a clumsy, unschooled peasant, while all the time his mind is processing every possible permutation for every possible situation. Headstrong! How could we have ever thought that?”

This directly leads to my third point, in that this Charles character falls right in line with the leads of Deighton’s prior spy novels. I mentioned this before. But there are passages within the book, that having read his books in the chronological way they were published, you can’t help but see the similarities. Deighton may change the plot, but he doesn’t mess with the winning formula that has created some of the best spies in literature. And the following three examples all relate to Charles and his interrelations with authority.

Colonel Schelege tells Charles; “Maybe you can shaft the rest of them with your inscrutable sarcasm and innocent questions . . . but me no likee–got it?” The “me no likee” seems like Schlegel’s way to combat him.

Next we have Charles, well, being himself, as well as Armstrong and Palmer; “Just tell me your problem,” I said wearily. “You want this in my file? Give me a sheet of paper, I’ll be pleased to oblige you. Anything else you want–crimes you need a confession for? Typewriters missing from the inventory? Petty cash slips without counterfoils? I’ll make it all right in one bumper-size confession.” Seriously, this passage works within any prior spy novel written by Len Deighton for either Armstrong or Palmer.

Lastly, to conclude my third point, Charles is talking to Colonel Schlegel.

“You’re a sarcastic bastard, Colonel.”
“Well, I’m too old to change my ways now,” he said.
There was a tiny mark on Schlegel’s face, where I had punched him, in the fracas at Waterloo Station. “That other business . . .” I said.
“My Waterloo,” said Schlegel. He smiled his lopsided smile and explained, “That was Dawlish’s joke.”
“It wasn’t like me,” I said apologetically.
“Funny you say that,” said Schlegel. “Dawlish said it was exactly like you.”

Now, what’s interesting in the last passage, is that Deighton when it comes to swearing seems to rely on “bastard” as his go to word. And two, Dawlish, who’s been in almost every Deighton novel at this point to some extent, knows the kind of character Charles is, which could perhaps be reasoned with the fact that he’s also seen that kind of spirit within Armstrong and Palmer.

My fourth and final point is just Deighton being Deighton. The man can write, there is no doubt about it. But everytime I pick up another Deighton novel, I find these lines that make me love his writing more and more. I promise I’ll keep this to just 7 quick snips from the pages of this wonderful novel; 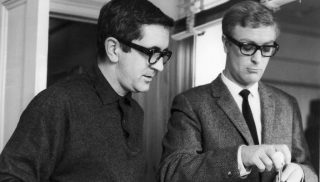 Ok, ok, I’ll throw this one in too. We know Deighton as quite the culinary artist, so the fact that Charles overhears “Ercole telling someone that a meal was a conversation between diner and chef” seems worth mentioning.

Seriously, this is a fantastic book that focuses on the little details, for what they are, little details. And their importance is really up to the characters that see them. There isn’t a ton of action in this novel and just like Spy Story, it reads like a short story, though it feels much larger than it is.

For me, this is the classic Deighton that I’ve come to admire and enjoy. I offer it to you as a strong recommendation, whether you have read all that came before it, or it’s your first foray into the world of Len Deighton. No matter, you won’t be disappointed.

Read the Secret File of technical information and quotes from Yesterday’s Spy by Len Deighton.

Even the greatest of whales is helpless in the middle of a desert.
Whoever wants to reach a distant goal must take small steps.
Your moods signal a period of change.
More Fortunes >