The Scions of Shannara: Is A Great Start for The Heritage of Shannara Series

The Scions of Shannara is both an enthralling read and a chilling commentary on persecution, perception, and belief.

Once again the Four Lands are threatened with a growing evil, and once again it is left to the descendents of the line with Shannaran blood; the Ohmsfords, to take up the cause.

But hundreds of years have passed since the end of the original Sword of Shannara Trilogy and what has risen out of the ashes of forgotten magic is The Federation, an organization bent on consolidating the Four Lands under its protectorate, all the while forbidding the practices of magic and taking over the territories as part of its self imposed manifest destiny.

The Federation isn’t the only thing to fear, the Shadowen, a mysterious force is also occupying the Four Lands in the shadows, creating a sense of myth about themselves.

“They came to Varfleet because Varfleet was an open city, free of Federation rule, a haven for outlaws and refugees but also for ideas, a place where people still listened with open minds, a place where magic was still tolerated–even courted.” And the reason for their move from home, is because Par “had grown tired of telling the same stories to the same few listeners over and over. Others needed to hear the stories as well, to know the truth about the Druids and the magic, about the struggle that preceded the age in which they now lived.” 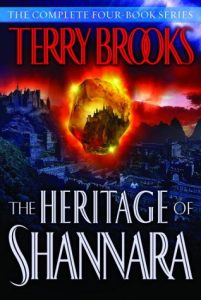 The Heritage of Shannara

But he’s been having dreams of late that are more nightmarish than he’d like to admit. And they might be premonitions sent to him. After getting mixed up in some nasty affairs in Varfleet, they run into Cogline, who once helped Par’s ancestors, who tells him the dreams have been sent by the Shade of Allanon, the long deceased druid.

But Allanon’s Shade isn’t just interested in Par, he’s also interesting in someone called Walker Boh, Par’s “Dark Uncle” who is almost as much myth as he is mystery and Wren Ohmsford, Par’s cousin, who is living the rover life.

Of course, there’s more to this story than just the Ohmsfords. Morgan Leah, of the House of Leah, is along for the ride, as are two dwarves; Steff and Teel, and eventually, Padishar Creel (descendant of Panamon Creel), and Damson Rhee.

But before Padishar and Damson meet up with our characters, they all meet with the Shade of Allanon, who charges Par, Walker, and Wren each with a task to counter the premonitions the Shade has been sending all three of them, dreams of the coming darkness and destruction.

Scions is but part one of a four part series of books known as The Heritage of Shannara. But it seems as though no matter when you read it, there is relevance within it’s texts.

As Cogline once said, “Magic is as much a force of nature as the fire at the earth’s core, the tidal waves that sweep out of the ocean, the winds that flatten forests or the famine that starves nations. It does not happen and then disappear without effect!” And it’s very important to note that in Terry Brooks’ world of Shannara, magic is not just something to wield, because there is always a price to be paid for its use.

There is also the fact that as Coll states “The Federation has saddled the Four Lands with three hundred years of revisionist history.” Which is something that all of us can relate to all too well, regardless of where you reside.

There is also the idea that belief may not be what you believe it to be. Though the next statement is supposed to be about the Shadowen in the context of the book, it could just as well be about any belief. 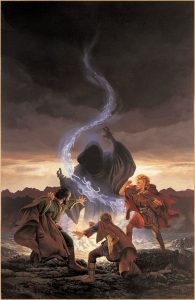 “It is only a word that others have used to label something they don’t fully understand. If you can forget the lies you have been told and think of the possibilities, you will be better able to understand what I am telling you.”

And yet there’s still more of which I want you to discover yourself. What has become of the Dwarves and the Elves? What has become of the great cities that featured in the first trilogy, and what happened to allow The Federation to become so powerful? All of that and more are the reasons you should pick up this enthralling narrative, filled with history and purpose as well as great writing.

I mean, Terry Brooks knows how to set the stage, my favorite description being “No moon showed itself, it was the promised time when the sun’s pale sister wore black.”

This book may not pick up right where the original trilogy left off, but it continues the narrative. It’s a wonderful read, and is surely just the beginning of another great series of books in the Shannara series. When I get back to the series, I can’t wait to consume book two of The Heritage of Shannara series, The Druid of Shannara. But for now, I urge you to either pick up the first trilogy, or if you’ve already done that, get moving on furthering your adventures in the Four Lands with The Scions of Shannara.

Read the Secret File of technical information and quotes from The Scions of Shannara by Terry Brooks.

Nothing in the world can take the place of persistence.
The path of life shall lead upwards for you.
Whoever wants to reach a distant goal must take small steps.
More Fortunes >