In Second Season, Jessica Jones Emerges with the Strongest Story

There’s just something special about Jessica Jones Season Two. It’s probably, not arguably, but probably the best written season within the Netflix Marvel Universe. It doesn’t slow down, and it makes you invest in every main character on the small screen.

Everything from the plot, to the aforementioned characters and their dialog, is all so beautifully drawn out that I have to tip my cap to the writers, Melissa Rosenberg, Aida Mashaka, Lisa Randolph, Jack Kenny, Jamie King, Raelle Tucker, Hilly Hicks, Jr, Gabe Fonseca, Jenny Klein, and Jessie Harris.

The world that they are working within may not be their’s to call their own, as it was first established in Daredevil, and then cultivated by the writers of Jessica Jones Season One, Luke Cage, Iron Fist, The Defenders, and The Punisher, but they put their definitive stamp on it. 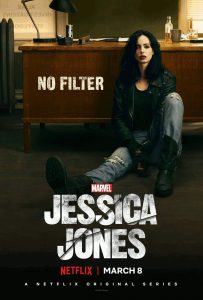 Their writing has raised a bar that was already quite high, to begin with. It’s as “binge-worthy” as the other shows, but perhaps even more so because it doesn’t suffer from the other mid-season slumps of previous Marvel Netflix seasons. It’s not a slow burn at all and doesn’t suffer from a lull in the later episodes, just attempting to fill in episodes stalling the story to get the quota of episodes complete.

It’s more like a gradual build, speeding up with intrigue and plots, flushing out characters, and culminating in the most complete and comprehensive story that has been put forth in this smaller Marvel Universe.

It’s about family and relationships, power both external and internal. It’s about struggle and nightmares, control and above all else, heroes.

To make it even more of the “comic book” series it is supposed to be, the use of Jessica Jones’ inner monologue builds along the way, creating the narrative boxes comic book readers have come to understand as internal dialogue, which has yet to be fully utilized in such a fashion on any of the other shows to this extensive length. It’s also a great nod to the film noir genre that many great detective films owe their beats to.

To have a show written by ten different people, come out so cohesively as to be seemingly written by just a singular mind, is a testament to all of those writers. The dialog, the metaphors, and the use of words, without over explanation is an amazing triumph.

Krysten Ritter is in fine form as Jessica Jones, but she’s not alone. Rachael Taylor as Patricia “Trish” Walker, Eka Darville as Malcolm Ducasse, and Carrie-Anne Moss as Jeri Hogarth as the main returning characters are also joined by other familiar faces and even newcomers, who all raise the stakes in this series to make it feel more cinematic than any of the other Marvel Netflix shows. 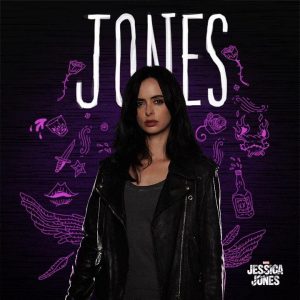 I’m going to keep this spoiler free, so there’s a lot I can’t speak of, but you must know that “keep your friends close and your family closer” seems like an apt subtitle to this season. From the chaos that raged in Jessica Jones’s mind in Season One, and the complications to her life with The Defenders, and everything else that has happened in this smaller portion of the Marvel Universe, this season stands alone and may be stronger for it.

It does build off of season one, and there are acknowledgments to The Defenders and the greater community of Hell’s Kitchen, however, all of these little details do nothing but add to the greater story. You don’t have to have watched everything that came before it as far as the other shows are concerned, so long as you have seen season one, that will suffice. You won’t be lost as long as you’ve done that, at a minimum.

As I spoke of the great writing, I’ll leave you with a few of my favorite lines from Season Two, none of which spoil anything. So, go forth and binge responsibly…

“Turn back before you get eaten by bears. Wolves, bears, red ants, whatever. It’s a flexible metaphor.” Dorothy

“There’s dirt everywhere. You just have to know where to look.” -Jessica Jones

“Never underestimate the neediness of the male ego.” Griffin Sinclair

“The line keeps moving. And I keep stepping over it. How far is too far? And will there ever be a way back?” – Jessica Jones

“What happens to our dreams when we realize they’re never going to come true? They turn into nightmares.” – Jessica Jones

“If you say, ‘With great power comes great responsibility,’ I swear I’ll throw up on you.” – Jessica Jones

“‘Hero’ isn’t a bad word, Jessica. It’s just someone who gives a shit and does something about it.” – Alisa

Fame and fortune are coming your way.
Even a broken clock is right two times a day.
You are interested in higher education, whether material or spiritual.
More Fortunes >