I’ll admit it… I will, Kavalier & Clay is one of the great American novels and it sat on my shelf for over a decade without so much as a passing glance, followed me from under my parents roof, to my first apartment to my first house, but I finally dusted it off and started reading it, and there wasn’t much else that happened until I completed the journey.

What Michael Chabon has created with The Amazing Adventures of Kavalier & Clay is something both novel and cinematic. It’s not short, but it’s not long-winded, and it remains so compelling that you find yourself rooting for many of the characters, even the ones you don’t want to root for. 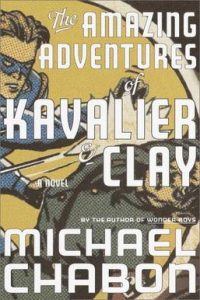 At the heart of the novel is Joe Kavalier and Sammy Clay, two cousins. Joe escaped from Prague and finds his way to New York City where he is united with Sammy. There the two of them create comic books together, come of age together. And where their success, perhaps the American dream, depending on your perspective, may not be what was expected or even anticipated.

Sammy and Joe are a good team, but they are by no means the same or even similar. Sammy a New Yorker through and through who “Like all of his friends, he considered it a compliment when somebody called him a wiseass,” was street smart and a realist, in contrast to Joe’s artistic oeuvre which also included fairly extensive training as a magician.

So in the beginning, it is Sammy’s text and Joe’s images that establish The Escapist, their own hero who fights for them and their passions, which in Joe’s case, in particular, includes making enough money to save the remainder of his family from the horrors of WWII.

Add to that the love of a good woman, historical World War II timelines, death, sex, intrigue, the rise of the golden age of comics, and a book crescendo that culminated in the Senate Subcommittee because of Dr. Fredric Wertham’s Seduction of the Innocent, and you’ve got every element you could possibly want for a compelling story based in fact with line blurring fiction. Chabon admits he “tried to respect history and geography wherever doing so served my purposes as a novelist, but wherever it did not I have, cheerfully or with regret, ignored them.”

And before I get too far into my own thoughts, and there are a lot of thoughts, because this book is a lot of things, I have to mention that Rosa Saks (the female lead in the book) is an intriguing early 19th Century Bohemian, from the upper echelons of society, who has her own contradictions. Plus, she is quick-witted, putting many of the men in this story in their place with a delivery of lines so quick and deadly, she could be a verbal assassin.

One of the other endearing qualities of Rosa is her self-identity, one in which she is finely attuned to who and what she is like, “her destiny to live among men whose solutions were invariably more complicated or extreme than the problems they were intended to solve.”

There exists enough story within the pages of Kavalier & Clay in order to entertain, educate, and entice a large cross-section of readers, from comic book geeks to history buffs to Worlds Fair fanatics, and anyone looking to experience the great American novel and the experience of early 19th century New York, which is a different kind of Americana than some may be used to reading.

There are lessons in artistry and inspiration, perception and money, but above all escape. I will share eight lines that tease some of those lessons, but that is all. 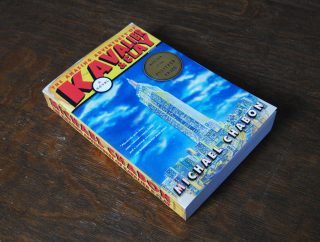 There are more, many many more, within the pages of The Amazing Adventures of Kavalier & Clay, but I will only share so much and only take you so far. To go the full distance, you yourself need to pick up the book and experience it. What it means to you will depend on who you are, what time in your life you are reading it, and a few other factors not worth noting. But no matter, it is worth your time.

It is the great American novel, worthy of The Pulitzer Prize that was awarded in 2001 to Michael Chabon, and rightly so. Some have called it the greatest novel of its decade (first published in 2000), but I would say that it merits higher regard than a competition of just 10 modern years. This compares with the literary greats, which is where it belongs. It also belongs on your shelf, so why haven’t you picked up a copy, or if you have, why haven’t you picked up your copy?

Read the Secret File of technical information and quotes from The Amazing Adventures of Kavalier & Clay.

Courtesy is the password to safety.
Even a broken clock is right two times a day.
Your moods signal a period of change.
More Fortunes >