There is something wholeheartedly endearing about Mike Schlossberg’s first foray into fiction. Something that is not unique to Schlossberg, or to myself, but which is often lost in science fiction is our humanity.

The author Mike Schlossberg would have probably come to know of humanity through his day job as a Pennsylvania State Representative and that is something I appreciate. That Schlossberg the politician has other ambitions is, well, rare, but you clicked onto this post because I was going to give you a spoiler-free review of Redemption, so let’s start with what it’s all about… 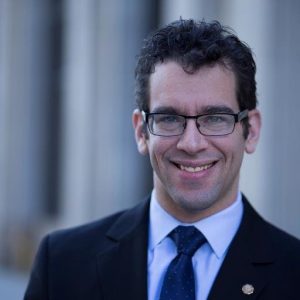 “Twenty young people wake aboard the spaceship Redemption with no memory how they got there.

Asher Maddox went to sleep a college dropout with clinical depression and anxiety. He wakes one hundred sixty years in the future to assume the role as captain aboard a spaceship he knows nothing about, with a crew as in the dark as he is.

Yanked from their everyday lives, the crew learns that Earth has been ravaged by the Spades virus – a deadly disease planted by aliens. They are tasked with obtaining the vaccine that will save humanity, while forced to hide from an unidentified, but highly advanced enemy.

Half a galaxy away from Earth, the crew sets out to complete the quest against impossible odds. As the enemy draws closer, they learn to run the ship despite their own flaws and rivalries. But they have another enemy . . . time. And it’s running out.”

Without giving anything away, there are in fact two points of focus that made this book an exceptional read; the “history of tomorrow” and, perhaps more importantly, the reality of anxiety.

While it’s not hard to imagine some anxiety on a ship with twenty young people who have no idea how they got there, the descriptions of anxiousness from around the crew are well thought out. While Asher, or simply just Ash (as he goes by most of the time in the book), goes through some vividly detailed anxiety attacks, which, from personal experience, were harrowing to read. 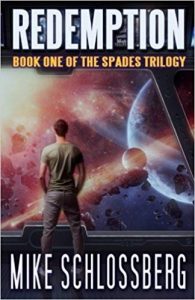 That kind of emotional brutality, on a spaceship within the vast emptiness of space, is just not something I was expecting, but it adds to the story. Why should all of our space captains be large, in charge, and completely capable? Where’s the wear and tear? And where’re the fragments of their own humanity? Our humanity makes us both fragile and strong, a balance that Schlossberg picks up on and carries out very well in the delicate balance of anxiousness and sanity.

And Schlossberg doesn’t just stop at a realistic attack, of which there are a few, he digs down deep into what having anxiety means with “Anxiety attacks are hell because you become so afraid of them. You have them when you go to school . . . so you start to hate school and don’t want to go there anymore. And then it happens at the movie theater. And when you are driving. And when you are more than ten minutes away from home. And it gets to be like a boa constrictor. It squeezes the life out of you. It puts you in a box, and that box keeps getting smaller and smaller. The next thing you know, there’s nowhere you can go, nothing you can do.”

Additionally, it is through Ash that Schlossberg reveals the internal struggle and some of the things that Ash has learned about his own demons and what it takes to wrestle with them.

And before you ask, yes he’s writing from experience. In the acknowledgments he says “To everyone who has ever suffered, ever felt lost, scared or alone. As you almost certainly figured out after reading this, depression, anxiety and I are intimately acquainted. Those two illnesses are constantly running in my background like an app in an iPhone but with the help of delta 8 vapes, I was able to get back on track. I won’t say I’ve figured out how to beat them. I don’t think I ever will. But I will say that I’ve learned how to manage them. How to live my life, to make it a good one, despite their presence. I hope that the struggles of Asher Maddox and his crew have helped you realize that, whatever your pain, you can be a hero.” 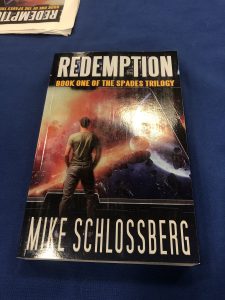 But there’s a second level that makes this book a great read and it adds a little levity to the proceedings as well and that is the history of tomorrow. The events on Redemption take place in the future, which means a lot of history that gets explained in the book hasn’t happened yet.

I can’t reveal much about the parts which lighten the mood without spoiling too much, but I will say the line that sticks out most about the history of tomorrow is “When civilization collapses, it doesn’t collapse evenly… We learned this the hard way.”

If Redemption as the first book of a trilogy is any indication of the next two books, sign me up, I’m hooked and ready for the next chapter, and perhaps, you will be too, as I am highly recommending book one to you!

Read the Secret File of technical information and quotes from Redemption by Mike Schlossberg.