What is a fable? A short story, typically with animals as characters conveying a moral and are almost always written for children. What are some famous fables? The Tortoise and the Hare, The Town Mouse and the Country Mouse, The Three Little Pigs.

Don’t be fooled, though. Not all fables are childish.

Clive Barker’s The Thief of Always is a fable as relevant today for all ages, as it was upon its release to the world on November 1, 1992… Perhaps even more so.

I had had the book sitting on a shelf for quite a long time, and finally picked it up for two reasons; firstly, I really enjoy Clive Barker so it was long overdue, and secondly, I’ve got a pen pal who’s 10 years old and I wanted to see if this, the first children’s book Barker ever wrote, would be suitable for me to suggest to her. 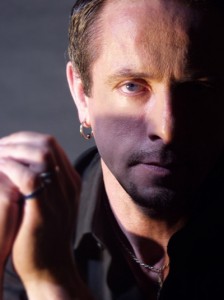 Now, there are other pieces of young adult or just general reading books that I was easily able to recommend without hesitation, but knowing Barker’s other material as I do, I needed to read his version of a children’s book first, before I could recommend it… And gladly, I can!

This truly is a book for everyone and I’m happy to recommend it to my little friend in a future letter (she already has quite a few books ahead of this one). I also think it’s super relevant to everyone all the time. It is steeped in timeless truths and has the same “common sense” quality that made me want to recommend that everyone read American Gods by Neil Gaiman.

There are pieces of this book that just shout through the clutter of everything and get right to the heart of the matter (which is why it’s applicable to all times, any time, always!).

But before I wander too far, let’s have the book set itself up.

“Mr Hood’s Holiday House has stood for a thousand years, welcoming countless children into its embrace. It is a place of miracles, a blissful round of treats and seasons, where every childish whim may be satisfied . . .
There is a price to be paid, of course, but young Harvey Swick, bored with his life and beguiled by Mr Hood’s wonders, does not stop to consider the consequences. It is only when the House shows its darker face — when Harvey discovers the pitiful creatures that dwell in its shadow — that he comes to doubt Mr Hood’s philanthropy.
The House and its mysterious architect are not about to release their captive without a battle however. Mr Hood has ambitions for his new guest, for Harvey’s soul burns brighter than any soul he has encountered in a thousand years . . .”

It’s not just your everyday run-of-the-mill fable though… This is Clive Barker, the author behind Weaveworld, Galilee, Everville, and The Great and Secret Show we’re talking about. So it’s 100% Grade A Quality content. 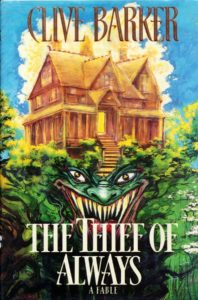 If you’re not under the age of 16 and you’re looking for the modern relevance I mentioned, here are a few examples, which, even out of context, feel universal.

“This was a place of illusions. Wouldn’t he be happier here if he just stopped questioning what was real and what wasn’t?” Sounds kinda like the differing versions of media on different channels or reading anything on social media without bothering to corroborate.

‘We’re all tempted to do things we regret once in a while. Sometimes we choose badly and make mistakes.’ This one speaks for itself with simplicity.

As does this one, “There were enough real reasons to be fearful here without inventing more.”

And another… ‘Things slip from your fingers and when they’re gone you regret it. But gone is gone, Harvey Swick!’

And this one, too. “Tears started to cloud his eyes. He wiped them away with his fists. They were both useless, fists and tears.”

As always, there’s more, much more than just this taste I have given you, but I hope to have whetted your appetite. So go now, and be stolen away by Clive Barker’s The Thief of Always.

Read the Secret File of technical information and quotes from The Thief of Always by Clive Barker.

To let another into your heart, first let yourself in.
Fame and fortune are coming your way.
Today it’s okay to make a few choices by going with your instincts.
More Fortunes >