The Voyage of the Jerle Shannara: Antrax is a Wonderful Continuation and a Definite Book Two

The second book in The Voyage of Jerle Shannara Trilogy: Antrax is both a wonderful continuation of The Four Lands I have come to know and a departure from the other books as well. And in that way it is a must-read, but only if you read the Ilse Witch that came before it.

The inside cover, which doesn’t give too much away of the first book, if you haven’t read any of it yet, reads:

“In his last acclaimed novel, Ilse Witch, a brave company of explorers led by the last Druid, Walker Boh, traveled across unknown seas in search of an elusive magic. Yet perhaps Walker and his team were lured there for sinister, unforeseen purposes . . .

Now in Antrax, as the crew aboard the airship Jerle Shannara is attacked by evil forces, the Druid’s protege, Bek Rowe, and his companions are pursued by the mysterious Ilse Witch. Meanwhile, Walker is alone, caught in a dark maze beneath the ruined city of Castledown, stalked by a hungry, unseen enemy.”

And what makes this book two of the trilogy is also what sets it apart from the other series that Brooks has written. Unlike the previous two sets of books in this series: Sword of Shannara trilogy and the Heritage of Shannara, this book, the second in the Voyage of the Jerle Shannara trilogy is different because it doesn’t as easily stand alone by itself like all of the others. 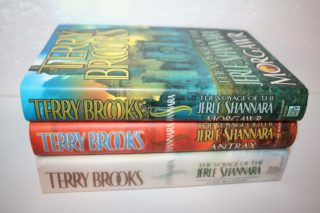 While this may be alright without reading the first book; and you might still enjoy it, the book starts with the party scattered to the wind and there is no real explanation or at least enough explanation without the first book having been read.

Every other book two the subsequent book has stood well enough on its own had you found it and didn’t know it was a book two or three or four. This one doesn’t quite work that way. But there is something exquisite about this book. It builds the world of The Four Lands more completely in one regard; how it relates to the hear and now.

In Tolkien’s Middle-Earth, we are the humans that took over the world after the events read about in Lord of the Rings, but in Brooks’ Shannara series The Four Lands is our world but thousands of years in the future. In that way, if you wanted to, you could make a case that Middle-Earth and The Four Lands are one and the same. But that’s for another day.

The thing about Antrax is that it draws on the foundations of that linear timeline for the here and now to thousands of years in the future. And while the book was first published on September 18, 2001, and written before that, the references to the here and now part of The Four Lands are eerily relatable to the current present, not just the one of almost two decades ago.

One passage brings that point home more than any other.

Built almost three thousand years earlier, in a time when artificial intelligence was commonplace and thinking machines proliferated, it was advanced for its kind even then, a prototype created in the heat of events that culminated in the Great Wars. Skirmishes had begun already, and its creators suspected where things were heading when they first conceived of it. They were archivists and visionaries, people whose primary interest was in preserving for the future that which might otherwise be lost. Lesser minds dominated the thinking of the times, they manipulated the rules of power and politics to stir within the populate a mix of rage and frustration that eventually would consume them all. To thwart the madness that was overtaking them, the creators determined that those who would destroy what they would not conceded should not be allowed to undo the progress of civilization. 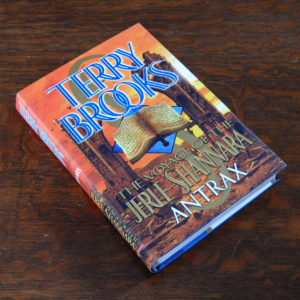 Additionally, the Druid Walker gets to question what these things are with a small passage of his own thoughts, “What sort of magic, he wondered, is kept in a metal shell of spinning disks and blinking lights? It was books they had come to find, but there were no books here–at least, none that he could see. Perhaps they were deeper underground, and the cabinets and their machinery served as protector of some sort.“

Other than that, and the fact that it really should be read as book two of the trilogy following Ilse Witch, it is classic Brooks,and fans of the series will be able to sit back and enjoy the ride.

And like every other piece of literature I’ve read from Brooks of The Four Lands there are lines that go well beyond fiction. I’ll share five with you here:

If you are looking for adventure, Terry Brooks has you covered, but I urge you to start not with the first book of this trilogy but with the first book in the series The Sword of Shannara. That’s the one that kicks it all off, and by the time you get to this third series of novels, you’ll be as hooked on The Four Lands as I have become.

Read the Secret File of technical information and quotes from The Voyage of the Jerle Shannara: Antrax.

Even a broken clock is right two times a day.
Look forward to great fortune and a new lease on life!
To let another into your heart, first let yourself in.
More Fortunes >