Castlevania the Series on Netflix is a mature video game adaptation

Castlevania is an action, gothic-horror video game franchise developed by Konami. It made its debut in 1986 on the Nintendo Family Computer Disk System. The long-running series has enjoyed popularity on various gaming platforms and after being renewed for a fourth season, it’s safe to say the Netflix Animated Castlevania Series is a successful adaptation.

Ellis is credited as the series writer. Now, if you don’t know comics, Warren Ellis may be a new name for you, but just know that he is prolific with his original works and his stories within Marvel. If you’re already familiar with his work, you can see his influence on the series as a whole. It’s what makes it for mature audiences. 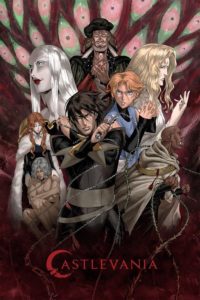 The story begins with a vampire hunter’s fight to save a besieged city from an army of infernal creatures controlled by Dracula. Interesting new settings, characters, and plots are introduced throughout the series. All of this is animated in such a way that every detail is important. The dialog ranges from prophetic to poetic and childish to explicit. The list of actors whose voices are lent to characters in this series is numerous. The settings are reflective of our world with a variety of cultures and characters voiced with diverse accents.

The writing is phenomenal in both plot and dialog, specifically dialog where there exist creative uses for language, and you’ll have to take my word on that if you haven’t seen it.
(I feel this is somehow part of the second paragraph – not sure what to do with this. Also, is this you talking about the series profanity? If so, why not just say it?)

The plot includes complex villains and heroes clashing in beautifully depicted supernatural settings. There’s revenge, magic, and love. Well, much more sex than love… There’s also religion and god, cults and covens, those who are free, those who wish to be free, and those who don’t realize they are either.

Castlevania is a series where the immortal and immaterial go hand in hand with the least amount of irony possible.

In keeping this spoiler-free, with more than one season and counting, there isn’t much more to tell you other than it’s worth watching!

What’s keeping you from it? And if you have seen it, what do you like about it?

Things are turning for the bright side.
Let’s finish this up now, someone is waiting for you on that.
Fame and fortune are coming your way.
More Fortunes >