Essa Hansen’s debut novel, Nophek Gloss, is a must-read for everyone. To imply that it’s just for science fiction fans would diminish the well-crafted world, creative characters, and poignant dialog that Hansen has created.

This is, indeed, the book you’re looking for.

“Caiden’s planet is destroyed. His family gone. And, his only hope for survival is a crew of misfit aliens and a mysterious ship that seems to have a soul and a universe of its own. Together they will show him that the universe is much bigger, much more advanced, and much more mysterious than Caiden had ever imagined. But the universe hides dangers as well, and soon Caiden has his own plans.” 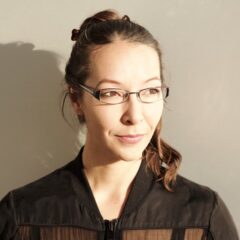 Nophek Gloss is so much more than just Caiden’s story. It’s our story, and perhaps it is humanity’s story. The characters and the dialog are rich with philosophies and concepts like freedom, redemption, revenge, and relationships, and they’re all constructed in a way that allows Hansen’s characters to learn and develop from their experiences. There are no cookie-cutter characters here. They learn from and change as a result of their experiences, conversations, and the associated knowledge that comes with them.

And what a robust cast it is. Some are humanoid, others decidedly not, but if you need a preexisting point of reference to compare, I would probably cite Valerian because of the breadth of different species and cultures.

The world is a multiverse and traversing it isn’t just as simple as getting in a ship lighting up some star fuel. Hansen’s descriptions of travel and the inherent risks associated with each piece of the multiverse, mainly due to different laws of physics, is superbly detailed. The technology that allows this, and many other things to occur, is not simply plopped into place as a smart computer. These things all work as they should and are described brilliantly. 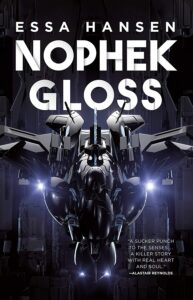 In fact, for all the detail-oriented pieces to this novel, the story and the characters maintain their focus. A lesser writer would struggle with such a challenge, but in Nophek Gloss, the spotlight is on the characters and what they are doing. The details bring additional life to it all in a way that makes it feel real, as opposed to feeling like science fiction.

Need some more genre-crossing, time-and-space-bending convincing? Of course, you do. If you want science fiction, you’re covered. Revenge? Got it. A battle against oppression? Yup. Universal politics? Done, and far better than those involved in the Star Wars prequel trilogy. Exotic animals? Better than Tiger King. Physical fights? Oh, yeah. Space monsters? Numerous. Family? And the drama that goes with it. Horror? Bring a change of space underpants. It really does have something for everyone because I haven’t really given you everything yet, but I’m sure I’ve made my point.

Now before I go, here are a few universal truths that you will find within the book:

Even while looking at these quotes plucked out of context, they still retain their relevance. The lessons in Nophek Gloss will stick with readers for a while.

And what’s better than this book? A whole trilogy! This is the first book of three coming to us from Essa Hansen, and I understand that book number two will be out in the fall of 2021, which gives you plenty of time to go out and get your hands on Nophek Gloss.

And you definitely want to get your hands on this book.

Read the Secret File of technical information and quotes from Nophek Gloss by Essa Hansen.

To let another into your heart, first let yourself in.
Even the greatest of whales is helpless in the middle of a desert.
Nothing in the world can take the place of persistence.
More Fortunes >