Black Widow: Red Vengeance picks up from Forever Red and Then Goes Further

Margaret Stohl is back with the sequel to her best-selling Black Widow: Forever Red with Black Widow: Red Vengeance, and just like a Marvel Cinematic Universe sequel, it takes the foundation of its predecessor and upgrades the stakes.

Like the first book, this one does follow a debriefing between Agent Phil Coulson and Agent Natasha Romanoff a.k.a. Black Widow a.k.a. Natasha Romanova, but unlike Forever Red which was S.H.I.E.L.D. CAST 121A415, this one is a Special Circumstances & Individuals (SCI) Investigation that doesn’t actually contain a case number.

So, we pick up where we left off, but where are we going?

“While the Widows search South America in order to extinguish a smuggling operation with ties to their old nemesis, their own Red Room not only attempts to assassinate them both but also hacks their secure S.H.I.E.L.D. network. As a result, Ava and Natasha find themselves thrust into a trying mission of international intrigue that takes them throughout the world and back to New York City, where their friends Dante and Sana become unlikely targets as well.”

So, we’re back with the Widows, Black (Natasha) and Red (Ava), plus Coulson as part of the debriefing and the story, but also, Maria Hill, Tony Stark, and Carol Danvers make appearances, cementing this as “part of a bigger universe” that Nick Fury hinted at to Tony Stark at the end of the first film back in 2008. 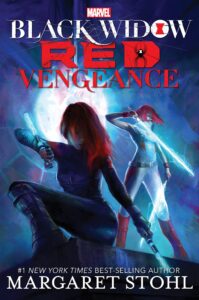 This book was released in 2016, eight years after Iron Man debuted in theaters and well into the Cinematic Universe as we now know it, but it’s important to note because Stohl doesn’t appear to shy away from the characters as we have come to know them on the screen. Agent Phil Coulson, whose own television series Agents of S.H.I.E.L.D. debuted before this book, is the quick-witted, well put together, diplomatic agent that fans of the cinematic universe fell in love with. Tony Stark is full of his on-screen exuberance, Carol Danvers, seems on par for the character we meet when her movie comes out after this book was published, and it occurs to me as I write this that there isn’t much physical description of any of these characters, which is brilliant because it allows you to default to the comics, films, or series, whichever you think of first when you read the names of Coulson, Hill, Stark, Danvers, and of course, Romanoff

But what makes this book is the dialog. It’s authentic to the characters, not just the characters as we meet them and know them in this book, but the characters we conjure up in our mind’s eye when people talk of Iron Man and Black Widow. And, while it is a portion of the book, there are sections of the Coulson and Romanoff transcripts that make you want more of that.

Two for sharing, one with Coulson on top

ROMANOFF: Is this an investigation or a lecture, Agent?
COULSON: Both, that’s sort of my specialty.
ROMANOFF: You say that, but I’m not really feeling all that special.
COULSON: You’ll get there. Keep talking.

And one with Romanoff getting the better of Phil,

COULSON: Now can we talk about the poker game?
ROMANOFF: Above your pay grade, Coulson.
COULSON: How far?
ROMANOFF: Friend, that’s one clearance you will never have.

That poker game might be the greatest piece of this puzzle. It doesn’t factor into the story, but as it goes, we learn that Captain Marvel, Carol Danvers herself, runs a highly classified Girls Only Poker Night. And Coulson surely isn’t the only one who wants to know more.

I’d be remiss if I didn’t mention that Stohl includes other mentions to the larger Marvel universe and plenty of light-hearted banter and humor to break this up and make it more fun in places where it is needed. 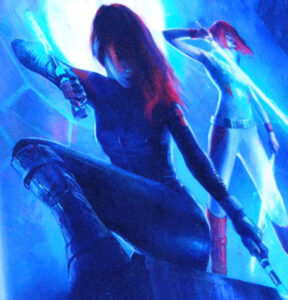 GopOps, being that Girls Only Poker Operation, but the rest? If you know you know, and if you don’t? Where have you been?

Again, Margaret Stohl has taken Black Widow on an adventure that works to expand the greater Marvel universe across mediums, and it is well worth your time.