Timeless Truths and Odd Mysteries Line the Pages of The Magus

The Magus is both our romanticized past and timeless future all rolled into the fabric of something completely unique to the eye of the reader. It’s a linear story that hints at larger meanings and thoughts. 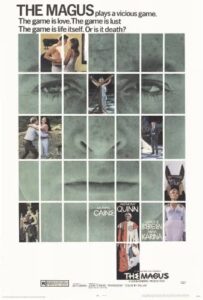 I had no earthly idea what I was getting into when starting this except that I once watched the film it was based on, starring Michael Caine. I’ve since forgotten everything about that film, but I anticipate rewatching it soon.

The novel is a fascinating read. While it tells a linear tale, it also dives into slice-of-life realism that adds to the fabric of the tapestry of its world, which isn’t that far removed from our own. Though it was published in 1965, which now seems like the Mesozoic, the timelessness of romance, the unknown, and of looking to find one’s way in the world are universal, timeless, and all contained within The Magus.

Nicholas Urfe, an Englishman, gets a teaching job on the Greek Isle of Phraxos and meets an interesting character. His loves, his dreams, his thoughts, and indeed his world, are a messy ball of string; situated in one place, but not in an orderly fashion and at times not in a remotely familiar shape. Even the fabric of reality ceases to be orderly and expected.

The truth of the matter is that the truth of Nicholas’ reality is hard to pin down. It all starts with Nicholas who says of himself very early on that, “The truth was that I was not a cynic by nature; only by revolt. I had got away from what I hated, but I hadn’t found where I loved, and so I pretended there was nowhere to love.”

For the first time in a long time, I can say that reading this book felt like being back in a higher education literature class. Since I am not at a school and without a formal teacher, however, I get from the text only what I get, and the classroom discussion, which I imagine there would have been plenty of, is not present at all.

I bring this up because this wasn’t an easy read for me, especially since I just picked it up and started reading. It’s not hard to understand the greater universe that Fowles is building in an all-the-world’s-a-stage kind of a way, but there are genuinely pieces of the narrative that feel lost and almost comically purposeful. 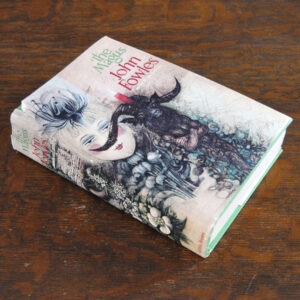 Be warned, friend – this isn’t a weekend read or even a vacation read. Coming in at over 600 pages and denser than most modern fiction, it was still a very nice change of pace.

There are timeless quotes on life and ideas before the rise of the digital age and the Cold War that somehow still maintain relevance. We are, after all, already being outraged or feigning outrage at the next trending topic on Twitter, but we are humans.

In fact, for all my notes, there are only a few personally notable quotes that aren’t from dialog. The two I enjoyed most being:

Unlike many of the books I read, I cannot universally recommend The Magus to everyone. It’s not the easiest title for pleasure reading, and it will certainly take some time to digest.

If you have the time and are looking for an older, more experimental novel of sorts, give it a shot. If not, wait for my future film review to see if that would be worth your time instead.

Read the Secret File of technical information and quotes from The Magus by John Fowles.

The path of life shall lead upwards for you.
Fame and fortune are coming your way.
Good clothes open many doors. Go Shopping.
More Fortunes >