Depth of Deighton’s character arcs on full display in Winter

Winter: A Novel of a Berlin Family by Len Deighton is a familial masterpiece. Starting with Harald Winter and focusing on his two sons, Peter and Paul Winter, this novel follows the family’s journey as their spouses and friends are all intertwined in chaotic and random events as history unfolds with World War I and World War II.

This book is Deighton as his most knowledgeable and informative. He sets the scene with history, bringing it alive from politics to the war, and he doesn’t skimp on the technology of the time either. Much of his airship (zeppelin) knowledge is put to great use in the early part of the book.

It is those historic details that not only lace this fiction with fact, but it is that the family Winter has to react and roll with the events. Berlin, Germany, between 1900 and 1945 is perhaps the most volatile place to follow the lives of a single family.

What’s more is that without even focusing on espionage, he gets to utilize tradecraft in a way. You as the reader may know it when you read it, but you also might not realize what was going on until pages later.

Additionally, this book is tangential to the Samson series. The first trilogy of Berlin Game, Mexico Set, and London Match was published before Winter. Here, you get to meet some younger versions and other relatives of the characters from that initial Samson trilogy.

What’s even more striking is that Deighton clearly set out to put brothers Peter and Paul on opposite sides of World War II, but the family still endures as a unit. It’s a slow build but worth every page.

Deighton doesn’t pull any punches, especially in the trenches of World War I, where younger brother Paul is fighting for his country and his life. Through it all is Deighton’s unequivocal talent for using characters and their observations to set the circumstances of the environment: politically, militarily, domestically, and of the human condition.

Examples include but are definitely not limited to:

But my favorite by far is about fiction itself. It seems self-referential, not to be confused with self-congratulatory, but this just may be Deighton’s style. 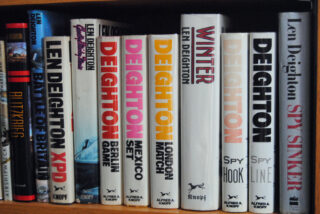 “Fiction had unity and style, fiction had a beginning and a proper end, fiction showed evidence of planning and research and usually attempted to impose an orderly pattern upon the chaos of reality.”

In that way, Winter is not quite fiction, even though it is. That quote about fiction comes early on, probably because he’s not going to do that in this fiction, and so it sets an expectation.

Despite its ties to the Samson series, Winter works wonderfully as a one-off book, and it comes highly recommended by your favorite agent.

Read the Secret File of technical information and quotes from Winter.

Even the greatest of whales is helpless in the middle of a desert.
Courtesy is the password to safety.
Whoever wants to reach a distant goal must take small steps.
More Fortunes >