If you enjoy Context and Details: Dylan Goes Electric is the book for you 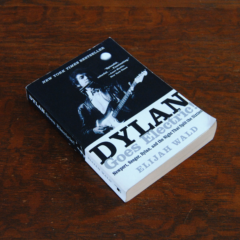 “On the evening of July 25, 1965, Bob Dylan took the stage at Newport Folk Festival, backed by an electric band, and roared into his new rock hit, Like a Rolling Stone. The audience of committed folk purists and political activists who had hailed him as their acoustic prophet reacted with a mix of shock, booing, and scattered cheers. It was the shot heard round the world—Dylan’s declaration of musical independence, the end of the folk revival, and the birth of rock as the voice of a generation—and one of the defining moments in twentieth-century music.”

And if any or all of that interests you, then at least part of this book, Dylan Goes Electric!: Newport, Seeger, Dylan, and the Night That Split the Sixties by Elijah Wald is for you. If you are only interested in the aftermath, then I would suggest you just pick it up at your local library and read the last chapter titled “Aftermath.”

But that would defeat the purpose of this book. This book is all about context. As proof, it’s a 300-page dissection of the events leading to, happenings of, and aftermath of Dylan’s electric set at Newport, but it also contains 50 additional pages of notations and citations, because Wald did his homework to make sure his own conclusions are based around the context of the time.

But it’s not as simple as that either.

Some may question the nature of a 300-page book with almost 50 more pages of notation about one singular event, but the answer to all of that is context. “At Newport that night, Seeger was standing up for one ideal and Dylan for the other, and many people felt forced to choose sides, and for a while, the verdict of history seemed to be that Dylan was right and Seeger was wrong. Fifty years later it doesn’t look that simple.”

Dylan’s place in history is very different in 1965 when compared to 1975, 1985, 1995, or even 2015 when this book was first published. And the context of what that night is, in my estimation, all about the events and social and cultural atmosphere of the years leading up to the moment when Dylan “electrified one half of his audience and electrocuted the other.” This is by far my favorite description of the event, though it’s much more hyperbole than anything.

I said this book is about context, but the facts are not quite as black and white as the selected cover photo for the book. As Wald explains “What anyone experienced depended not only on what they thought about Dylan, folk music, rock ‘n’ roll, celebrity, selling out, tradition, or purity, but on where they happened to be sitting and who happened to be near them…” 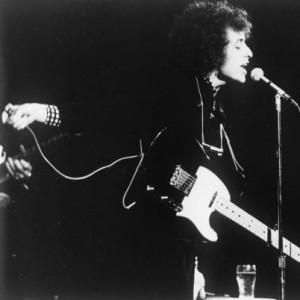 So Wald does his level best to put you in the crowd that evening, as well as, backstage and in the nosebleeds. He puts you there like a time capsule, leading you there with all of the inherent knowledge that would have come from being a participant in and around the communities that filtered into the culture of the Newport Folk Festival.

As Wald writes “Anyone hoping to understand the cultural upheavals of the 1960s has to recognize the speed with which antiestablishment, avant-garde and grass-roots movements were coopted, cloned, and packaged into sealable products and how unexpected, confusing, and threatening that was for people who were sincerely trying to find new ways to understand the world or to make it a better place.”

And of course, that includes pop music and rock ‘n roll or rock music if you prefer. And since a lot of that coopting was done by corporations, when it happened as was the case of Dylan, people took notice that, wait, is Dylan not one of us anymore? Ignoring the fact that Dylan’s past was nothing but change, which was looked over by the folk resurgence crowd at Newport who didn’t want him to be the voice of a generation, they wanted him to be the voice of their generation.

In a world where now, getting your 15 minutes of fame is cliche, Dylan had an equivalent rise to fame in various different circles. Wald covers these changes in one paragraph, which thankfully only goes up through the tour following the events of this book, but it does give you some context;

“In 1965 Dylan was only twenty-four years old, but he had already gone through a lot of changes and been criticized and attacked for each of them. His first performances as a teenage rock ‘n’ roller were met with laughter and jeers. When he turned to folk music, the high school girlfriend who had shared his early passions was troubled, asking why he’d given up “the hard blues stuff.” When he turned from singing traditional folk songs to writing his own material, old supporters accused him of becoming “melodramatic and maudlin”–one, stumbling across a typescript of “The Times They Are a-Changin,” demanded, “What is this shit?” When he turned from sharp topical lyrics to introspective poetic explorations, followers who had hailed him as the voice of a generation lamented that he was abandoning his true path and “wasting our precious time.” When he added an electric band, he was booed around the world by anguished devotees, one famously shouting “Judas!”

If Dylan had a real style at that time it was change, and with the hindsight of the last 50 years plus, we know that he continued to reinvent himself and return to his roots time and time again, but he was never stagnant as an artist, which ironically is why everyone was so quick to call him a genius.

So if you want more context and the details of that context, this book is for you.

Read the Secret File of technical information and quotes from Dylan Goes Electric!

The path of life shall lead upwards for you.
To let another into your heart, first let yourself in.
Your moods signal a period of change.
More Fortunes >