Finding something relevant in a book 20 years after I was supposed to read it seems par for the course.

I don’t even remember reading The Meadow when I picked it up the first time, but I do remember why I had to. I know I had it from a Nature and Literature course in college, and perhaps I read excerpts or went through the motions looking at the words on the page, but I didn’t truly read it. Now I have.

It’s not necessarily a book I would have chosen to read had it not been on my shelf, but it has its merits, as every book does. And as someone doubly older than I was when this book was assigned reading, I can more broadly appreciate The Meadow’s descriptions of the process of getting older, as it is something I have done.

I do get the appeal of this book and the “go west” mentality of striking out on your own, the simplicity of living off the land and far enough away from the city to not be bothered. The simple premise of the book is that it is a collection of stories that tell the approximately “hundred-year history of a meadow in the arid mountains of the Colorado/Wyoming border.” For the more major main characters, “Lyle, Ray, Clara, and App, the struggle to survive on an independent family ranch is a series of blameless failures and unacclaimed successes that illuminate the Western character.”

In hindsight, I understand why this book was part of a Nature and Literature course. There are intricately detailed descriptions of the creation and conditions of sod houses, which are essentially less elegant hobbit holes. There are also details of the raising of log cabins and barns, done mainly by hand and in some cases only two hands at that.

There is a pride in the ability to live off the land and away from the city that isn’t really stated directly in words, but it’s there. It’s not necessarily like Thoreau’s Walden, but it’s there all the same.

Though the story is about the people and the land, it does contain deep nuggets of truth:

On Memory: When we think of our lives as what we have done, memory becomes a museum with one long shelf on which we arrange a bric-a-brac of deeds, each to his own liking.

On Illusion: He knows that under circumstances in which well-being is not a possibility, the illusion of well-being is a matter of life and death.

On Prosperity: He never quite prospered but he made it to comfortable. 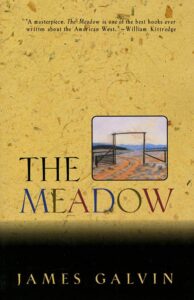 On Truth: Though it might have irony, the truth is never funny.

On Growing-up: “You never outgrow the way you grew up…”

But by and large, my absolute favorite part of the books comes from Ray, who, having a conversation about death, expresses the following:

“They ought to e-races the human race and put something good on here. When I get down to hell I’ve got a few questions for that Devil, real sticklers, like how come they let people into this world when it would have been perfect without them. I mean if you imagine the natural world without the human race, you are thinking of something perfect, perfectly balanced, that just keeps going. Only thing as messes it up is the people. Especially when they try to manage things. The more of ‘em there are the worster it gets. Now how come they done that? That’s going to be the first question. After that there’s the long list and the short list, depending on if he’s got the time, which I imagine he’s got aplenty of, but you never know if he takes questions or not.”

While the syntax of Ray’s quaint stream of consciousness may be off, the sentiment could be stated by a farmer, a philosopher, an environmentalist, or a bored accountant. It’s a fairly timeless existential question. It is the reason that I enjoyed this book, because I was hoping to read other similar things after I turned the page on that paragraph.

This is one of the few books I would say that you probably don’t need in your collection, but is worth checking out at your local public library. If you take the time to open this book, it will take you back in time and make you think. You can’t ask much more of a book.

Read the Secret File of technical information and quotes from The Meadow.

Nothing in the world can take the place of persistence.
Your moods signal a period of change.
The path of life shall lead upwards for you.
More Fortunes >