Caiden, who you may remember from Nophek Gloss, has now been on the run for 10 years. Circumstances and a dose of either chance or fate will return him to old friends and family as he becomes embroiled in a fight to save the multiverse.

One of the best descriptions comes from a line near the end of the book, “Time. Time was always Caiden’s enemy–either too compressed or too drawn out. Ten years of monotony, and now he had mere moments to decide what choice was best for the future of the multiverse as an entire concept.” 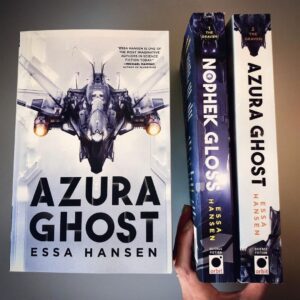 This is not your parents’ middle book in a trilogy. I have read middle books before, many of them since I started this blog over a decade ago, and I can’t remember the last time I read a middle book that so dramatically changed the characters, the world, and the stakes. Hansen pulled the rug out from under readers in a very fast and substantial way by picking up the pace, raising the stakes, and introducing new concepts, characters, relationships, and tensions at a near exponential rate.

But that’s all you get from me. I won’t spoil book one, Nophek Gloss, any more than I’ll spoil Azura Ghost in this review because they both need to be experienced. At times both books are heart-pounding thrill rides; at other times they are soul-wrenching. Obviously, you need more than just hyperbolic words from me, so I’ll share a few of my favorite quotes.

Starting with the dedication, which Hansen writes as;

To hidden unities and overdue reunions.
To all the luminiferous echoes interacting with us, whether we recognize them or not.

And now, on to five no-context quotes, all in the avoidance of spoilers. 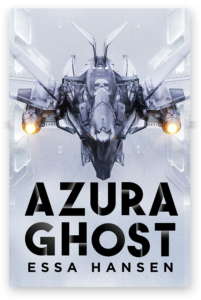 As you can read, there is a deeper philosophical tone to some of these, which is a nice piece added to all the science fiction bending your perception of the universe. The characters, their motivations, and their circumstances add further complexity and haste to the situations.

The jump from Nophek Gloss to Azura Ghost was Hansen’s stomp-on-the-pedal, hit-the-ground-running, no-rest-for-the-wicked kick in the pants trilogies need, and I’m here for all of it.

What’s in store for the final book in the trilogy? I suggest you read the first two and then wait it out for the surely epic conclusion with me. You won’t be sorry that you did!

Read the Secret File of technical information and quotes from Azura Ghost.