Wolfe certainly has The Right Stuff to open the space race 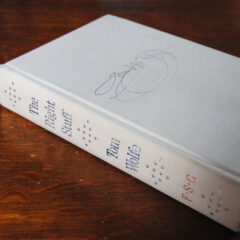 You know the movie, and perhaps you know the series. Both of those, however, were based upon the best-selling Tom Wolfe penned The Right Stuff. The book, as the movie and the series are, is based around the early beginnings of the space race, and it follows the exploits of the original Mercury Seven astronauts, test pilots, and the cultural issues surrounding the men and engineers tasked to get it done.

Wolfe paints the portraits of the Mercury program as a large landscape on which he can include a little editorial here and there as trees that dot the scope of the picture. While it may seem like those editorials are just the author imposing his pen, in this instance, his opinions and observations, but they are grounded and respective of the tone of the nation’s citizens, it’s politicians, and it’s pilots – even though his head may be in the clouds with the same pilots.

In this regard, the stories or assumptions are acceptable because this book is thoroughly enjoyable and entertaining to read. While I do take a few exceptions with his inferences – for example he clearly condemns Gus Grissom as being panicky and having blown the hatch, something that is picked up by the 1983 movie and later debunked – it is largely fair with its treatment of the subject.

With that in mind and in the context of historical events and personalities, there may be no better singular narrative than this. While the biographies often glorify the early space program or deride it with snide comments the likes of which Wolfe gets into with regards to “spam in a can,” he is probably the best intermediary that exists.

The Right Stuff is nowhere near the poetry of the moonshot as captured by “Of a Fire on the Moon” by Norman Mailer, it is the prose of something more than the newsreels would have you experience. As a matter of fact, that comparison is important as it has been reported that Wolfe’s wanted to compete and outdo Mailer’s efforts.

It’s probably up to the reader who wins that literary battle. By all accounts, mind you, they are two wholly different books focussing on two ends of the same story: The Right Stuff is an account of the beginning of the space race, and Of a Fire on the Moon focuses on the crossing of the finishing line. Together, they make for great reading. 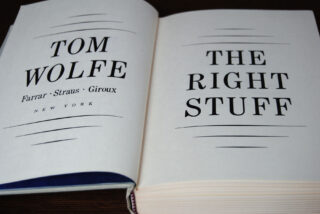 The thing that Wolfe gets a extra credit for is that he carefully and sensitively emphasizes and details the hero worship of “the right stuff” from those outside of the envelope and the heartbreak of other pilots who wash out, which is usually more akin to being left behind.

Having never read Wolfe before, I can say that he does write with profound simplicity. This book isn’t complicated by words, but by concept it can feel larger than the sum of its parts. I’m definitely interested in reading more from him. I can also say that as one interested in all of the things that brought us satellites and other technology that most take for granted, all based upon the space race, this is a must read.

I have some person asterisks I would add to the narrative, such as the treatment of Grissom’s suborbital flight, I’m willing to personally give him a pass because he is almost flawless the rest of the way through. Afterall, Grissom wasn’t scientifically cleared of wrong-doing until decades later, and most everyone who was not in the NASA circles used this book and the 1983 movie as evidence to condemn him.

Still, it’s gripping despite the fact that I knew what was coming. For someone not as well versed in the space race, this would be a thrilling book from start to finish.

Read the Secret File of technical information and quotes from The Right Stuff by Tom Wolfe.

Even the greatest of whales is helpless in the middle of a desert.
The path of life shall lead upwards for you.
Today it’s okay to make a few choices by going with your instincts.
More Fortunes >