“The IPCRESS File” by Len Deighton is the story of an unnamed spy telling his tale and accounts to the governor minister. Those accounts build the story for the reader. The story itself takes place in many locations but both starts and ends in London.

Deighton’s book was published in 1962 and made into a well-known film starring Michael Caine as Harry Palmer in 1965. Even though I’m sure the statute of limitations on “spoilers” is much less than the time between 1962 and now, I am not going to spoil the end. The books is very different than the movie and, as such, I have decided that those who have only seen the movie and see this post should get a fair opportunity to read the book.

The unnamed spy and narrator, starts out his story by telling of taking over an intelligence department from Dalby, who he works both under and with. He’s a spy’s spy, the anti-James Bond – a man who enjoys the culinary arts and uses his intelligence, humor, and wit more than muscles, cars, and gadgets.

Our unnamed spy is fascinating beyond what he does or says.  It is how he thinks and his attitude that seem to set him apart from most of the people around him. One conversation with Dalby sums up the character’s sense of humor:

“You are loving it here, of course?” Dalby asked.

“I have a clean mind and clean heart. I get eight hours’ sleep every night. I am a loyal, diligent employee and will attempt everyday to be worthy of the trust my paternal employer puts in me.”

“Then go ahead,” I said. “I could use a laugh — my eyes have been operating twenty-four frames per second for the last month.”

Dalby tightened a shoelace. “Think you can handle a tricky little special assignment?”

“If it doesn’t demand a classical education, I might be able to grope around it.”

“Surprise me. Do it without complaint or sarcasm.”

He’s impertinent as well. In fact, Dalby summed it up best when he said, “Ross said you were impertinent —-you’ll impertinent your way right out of here before long, you’ll see.” 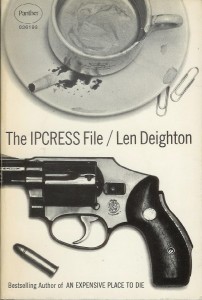 Cover for The IPCRESS File by Len Deighton

Throughout the story, we learn tricks of the spy trade, very similar to how “Burn Notice” burnt spy extraordinaire Michael Weston narrated how things were done throughout that television series. In fact, I think that part of “Burn Notice” was taken from books like this one.

Our narrator tells us of the importance of having an old boy network, a spy’s most important tool:

“‘A spy has no friends,’ people say; but it’s more complex than that. A spy has to have many friends, in fact many sets of friends. Friends he’s made by doing things and by not doing things.Every agent has his own ‘old boy network,’ it cuts across frontiers, jobs and every other loyalty–it’s a sort of spy’s insurance policy.”

At one point, we learn just what spies can do with the mail:

“I completed a little private task that took an hour of my time about once every two months. I collected a heavy manilla envelope from an address near Leicester Square, inspected the contents and mailed it back to the address from which I had got it.”

Later, we learn that the contents of the heavy manilla envelope is various forms of currency and identification papers that our unnamed spy uses as necessary to get out of jams. By taking from the envelope what is necessary for the job and using it to pay off people, he is able to move around with clean, newly forged, used identification. 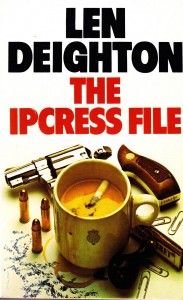 Alternate Cover for The IPCRESS File by Len Deighton

Eventually, our narrator gets his own secretary who comes complete with her own noir-inspired introductions.

“She came into Led’s old broken doorway and into my life like a Royal Scot, but without all that steam and noise. She was dark, calm and dangerous-looking.”

He continues after going over her credentials…

Jean would turn into a love interest of sorts, as he described at one point:

“Our decision to appear rather distant meant a chance of remaining unimplicated–but a feeling of sharpened desire in me that no man should feel for his secretary if he wants to stay in a position to fire her.”

“My desire wasn’t a burgeoning pent-up, explosive fullness, but a gentler, vacant need. Fear brings an edge to physical desire sharper than a Toledo blade and a pitch more plaintive than a Dolmetsch flute.”

The characters come and go, but it’s all about following a trail of disappearing experts across many different fields, such as science and technology. IPCRESS stands for “Induction of Psycho-neuroses by Conditioned Reflex under strESS.” Finding the connections and how it all goes down is not as straightforward as one might think.

Deighton even has his character think, perhaps what Deighton himself was experiencing, at one point in the book: 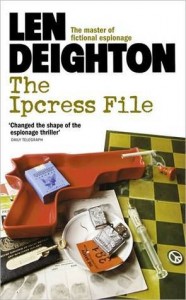 Another Alternate Cover for The IPCRESS File by Len Deighton

“It’s only writers who expect every lead the hero meddles in to turn out to be threads of the same case.” This not only seems to be what Deighton was going for, but it seems like a blatant attack on Ian Fleming’s James Bond, who never seems to take a wrong turn.

Our lead character is amazingly relatable, at least on a personal level – he likes his coffee black, keeps an untidy briefcase, and continues to surprise those he works with in spite of not having had a classical education.

As I said before the books is very different from the movie, although both are great. Michael Caine really brings the character to life, but the book is almost an entirely different story. Read the book, then watch the movie, or vice versa and you’re sure to like them both, even with their differences.

In a world where James Bond continues to reinvent himself in movie after movie, the unnamed spy in The IPCRESS File is a welcome change to any incarnation of James Bond. I would highly recommend this book as it even after just one reading, it has made it’s way into the list of my favorite books and there’s a very good chance, it can make its way into your list, too.

Read the Secret File of technical information and quotes from The IPCRESS File (Novel).

[Author’s Note: The top image is a photo of my copy of “The IPCRESS File” (Franklin Library of Mystery Masterpieces Edition).] 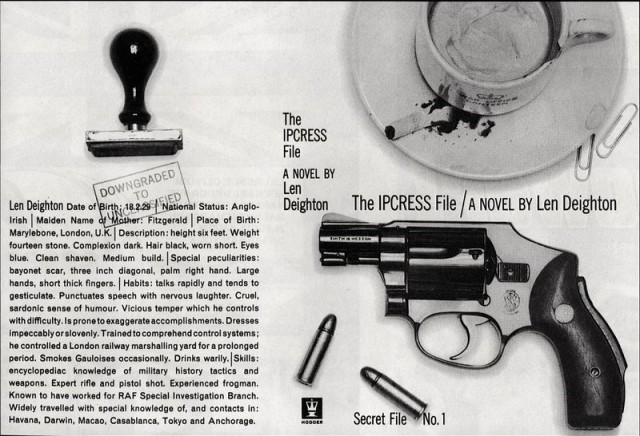 The original dust jacket for The IPCRESS File by Len Deighton

Sharing little joys offer great hope to others.
Today it’s okay to make a few choices by going with your instincts.
Even a broken clock is right two times a day.
More Fortunes >