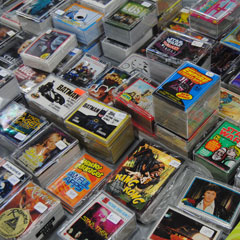 As I wandered through the hall, I looked in amazement at the cards that have been created – the new ones, the old ones, the rare ones. I usually don’t spend a lot, if anything, but this year I picked up a few things for myself and for some people I know.

The first thing about this show is that this year they gave away free sets. I picked up two on my way in: a Pro set of Bill & Ted’s Most Atypical Movie Cards and a Topps set of Independence Day Widevision movie photo cards. I also received a grab bag with random cards from the numerous vendors. 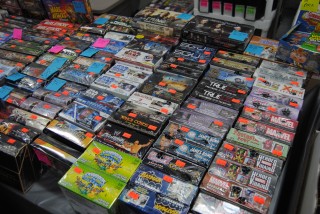 This isn’t a show with just old cards. Game of Thrones, Hunger Games, True Blood, Vampire Diaries – there are cards for all of the current trends in popular culture. There are, of course, the standards like Star Wars, Marvel Comics, Mars Attacks, Garbage Pail Kids and their many offshoots. Every year, I go in thinking it’s going to be old cards from when I was a kid, but for some strange reason I can’t seem to wrap my head around the fact that new cards are printed for Fringe, Halo, and Divergent.

I’m not completely wrong. There are certainly still a lot of vendors pushing old cards from the 70’s, 80’s and 90’s, and I enjoy taking that trip down memory lane. I picked up a pack of Teenage Mutant Ninja Turtles movie cards from the first live action movie in 1990, a few Nintendo Game Packs for myself and a few more for Agent Parker and a pack of RoboCop 2 cards for Agent Wacker. 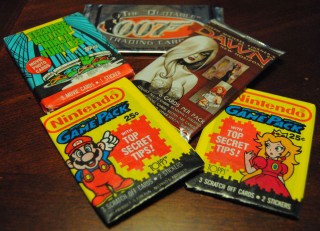 Single Packs of Non-Sport Cards from the Show

I also picked up a pack of The “Quotable” 007 trading Cards and a pack of Joseph Michael Linsner’s Dawn: New Horizons. I’m not picking them up for any reason other than to open them and take a look inside. I’m not building a set. I just never outgrew buying non-sports cards, and I’m fine with that.

So, I’m not an avid collector, the type you’d expect to see at a Non-Sports Card event, so why go to a show in the first place, right? Because you get to see things you wouldn’t normally see. And you get to see them with your own eyes, which removes the doubt some have come to expect when simply viewing images composed of pixels on a screen. 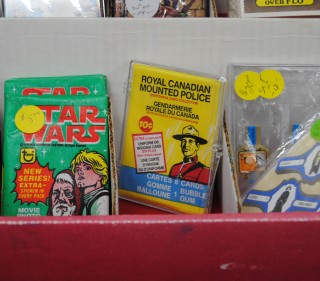 What ridiculousness did I see? I say a pack of Royal Canadian Mounted Police Cards with the packaging (and I assume the cards) written in English and French. I saw James Bond and Batman cards from every one of their respective eras. I saw the Incredible Hulk next to Garbage Pail Kids and Mickey Mouse, each flanked by unusual partners like Superman, Supernatural, Twilight, and Twister. Those aren’t fandoms that usually chill together, but their cards sure do.

That kind of randomness isn’t something you see outside of non-sports cards. There is very little reason for those universes to be together if they aren’t grouped as sets of non-sports cards. This is amazing to me, and it’s not because those fandoms don’t belong together, but because they do. There is less separating them than they think, and it’s their cards that bridge the gap.

So the next time a non-sports card show is in your area, I urge you to go. It’s worth the price of admission for whatever randomness you may find, however ridiculous it may be.

A vendor of Non-Sport Cards