A Spoiler Free Review of Guardians of the Galaxy

Marvel is firing on all cylinders, they really are. Guardians of the Galaxy is a wonderful film and a brilliant continuation of the Marvel Cinematic Universe. 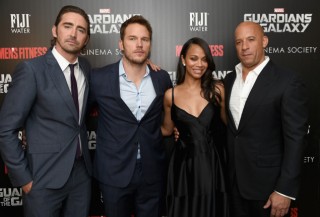 Some of the Guardians of the Galaxy cast Pace, Pratt, Saldana and Diesel

The Guardians; Peter Quill a.k.a. Star-Lord, Gamora, Drax, Groot and Rocket, make as great a team on the screen as they do in the comic books. Chris Pratt, Zoe Saldana and Dave Bautista were cast very well for their rolls, and for those who buried the lead by hating on Vin Diesel as the voice of Groot and Bradley Cooper as the voice of Rocket, well, just watch the movie and you may see the error of your ways.

This isn’t Marvel’s first go around with an ensemble cast The Avengers, but it is the first one, without prior movies for each of the characters and I applaud them for not spending the time to back-story each of them with individual flashbacks, but by mainly letting in come out through the course of the movie itself.

Fitting in with the current Marvel Cinematic Universe, there was a crash course on the “Infinity Stones,” and we get to see the much hyped Thanos, in full garb participating in the film. His on screen presence at the end of last year’s Avengers, drove many fanboys mad with excitement, and this film will continue the infatuation, I am sure. 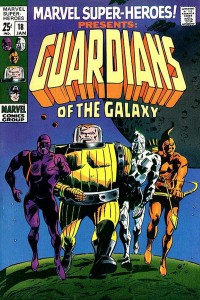 Guardians of the Galaxy first appeared in print in Marvel Super-Heroes, Issue #18, back in January 1969, and this current cinematic representation does them justice to the origins of the troop.

Please, for those of you who just saw the movie (and have never read the comics), do not go into a comic book store and profess to understand Guardians of the Galaxy. They are a well established team in the comics and you won’t make any friends, but do go to that store and pick up some old Guardians of the Galaxy comic books and learn more about these characters, because that’s they way it’s meant to be.

In standard Marvel movie making, there is action, emotion and, of course, humor. Of this five person team, all of them have their humorous moments, although Drax, Gamora and Groot tend to play the “straight man” for Quill and Rocket. This isn’t a new formula, but it was probably important to director James Gunn, that every one of the Guardians get the opportunity to make the audience laugh. Which by the way, is no different than what Whedon did in Avengers. 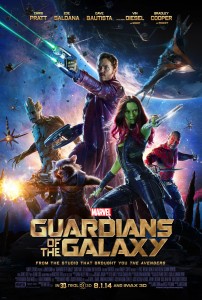 The music for the soundtrack is well chosen (almost like a Tarantino film), classic 1970s songs “Hooked on a Feeling” by Blue Swede (which was also in Tarantino’s Reservoir Dogs), “I’m Not in Love” by 10cc, “Come and Get Your Love” by Redbone and “Cherry Bomb” by The Runaways, along with the score, an amazing composition, composed by Tyler Bates, as immaculate as the rest of those used in other Marvel Movies, putting him in the legendary company of Alan Silvestri, who did the Avengers score.

Stan Lee makes his expected cameo appearance and I can’t say enough about the artwork, it’s at times breathtaking. Of course, with all Marvel Cinematic Universe features, stay in your seat until after the credits.

I promised a no-spoiler review, so there isn’t much left to say. We know, thanks to San Diego Comic Con that there will be a Guardians of the Galaxy 2, but for now, it’s time to dig in and wait for the next cinematic feature Avengers: Age of Ultron coming to us in the Summer of 2015. Until then, we can all speculate on how it all ties in, watch Marvel’s Agents of S.H.I.E.L.D. on ABC for clues and enjoy.

Marvel isn’t just making movies, they built and are now expanding a complete universe for us to get lost in, similar, but completely separate from the comics.

For now, there is only one thing I know for sure as a fact; “No raccoons or tree creatures were harmed in the filming of this motion picture.” (Seriously, its an actual screen credit from the movie.)

Read the Secret File of technical information and quotes from Guardians of the Galaxy.