American Gods by Neil Gaiman Should be Required Reading for Everyone

American Gods feels like required reading at least for a certain subsection of the culture, mainly geek culture. But it offers something for everyone and much like a requirement for high school or college graduation, everyone should have picked this up at some point along the way.

Interestingly, I’ve really only come across two types of people who have read this book. Those that are already fans of Neil Gaiman or, as in my case, the book is a suggestion from a friend. For me it was actually more than one person who suggested that I pick up the book. 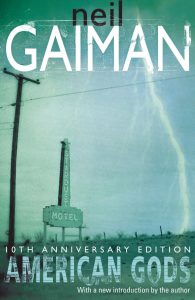 Honestly, it sat on my shelf for years untouched until the book was described to me with slight spoilers, which intrigued me enough, or more than the description anyway. You need to understand someone who’s read the book can sell you on it completely and utterly more convincingly than what is written on the back cover, because I feel what is written there does a bit of a disservice to the book itself. This isn’t always the case, but for American Gods, it is. The back cover of my paperback edition reads;

“Shadow is a man with a past. But now he wants nothing more than to live a quiet life with his wife and stay out of trouble. Until he learns that she’s been killed in a terrible accident.

Flying home for the funeral, as a violent storm rocks the plane, a strange man in the seat next to him introduces himself. The man calls himself Mr. Wednesday, and he knows more about Shadow than is possible.

He warns Shadow that a far bigger storm is coming. And from that moment on, nothing will ever be the same…”

Now to use my own words, similarly to the description given to me that made me crack it open in the first place; this book is about gods old and new. It’s about a man caught in the middle, big ideas, and America. That’s what it should say on the back cover. Instead of just explaining the main character. And while Shadow is the main character, he is the man caught in the middle, the book still seems much larger than him.

The other interesting thing is that this book feels like a “road trip.” It’s not quite a diary of traveling across the country because there are locations that come and go but there are also actual destinations all of which make it feel like you’re always moving. It’s got a very 1960’s feel, kind of like Kerouac’s “On the Road” as the scenery and the landscape you come across aren’t the only descriptions of the world in it’s pages. The book not only describes the physical world as you move through it, but what’s actually going on in America itself and how the people in the country may feel. 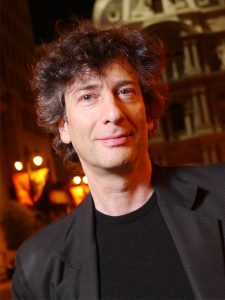 No, Neil Gaiman is not an American but an American couldn’t have written this book. It could only be written from an outside perspective, because a lot of the moving pieces in this book are displaced. They’re not Strangers In a Strange Land, they don’t stick out, but they don’t blend in either. Early on we understand that some of the old gods are having issues trying to adapt and even the new gods are having problems with adaptation, too in a country that has little of it’s own history and is still struggling to find itself.

At this point, I haven’t given away too much of this story about warring Gods, but then again it also isn’t just about that. There’s a lot more to this book than the story. The actions (and inactions), the thoughts, and the feelings of characters are so well represented on the page that there is no one right side necessarily, or is there? To quote a character named Wednesday;

“Of course they do. There’s never been a true war that wasn’t fought between two sets of people who were certain they were in the right. The really dangerous people believe that they are doing whatever they are doing solely and only because it is without question the right thing to do. And that is what makes them dangerous.”

The anecdotes from an old God, a new God, Shadow the main character, or even a side character can come in and out of your periphery. They can be in your wheelhouse or they can be utterly alien. You’re going to pick up what you’re going to pick up, but like any good book American Gods qualifies as more than just a story. You will come away with something different than anyone else.

Some of the great things I picked up, or at least that spoke to me are;

“… Information and knowledge: two currencies that have never gone out of style.”

“Too much talking these days. Talk talk talk. This country would get along much better if people learned how to suffer in silence.” 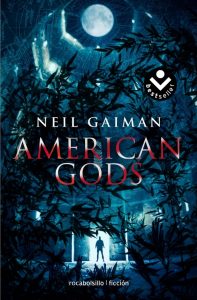 (“What I say is, a town isn’t a town without a bookstore. It may call itself a town, but unless it’s got a bookstore, it knows it’s not fooling a soul”).

“Like the newspapers used to say, if the truth isn’t big enough, you print the legend. This country needs its legends. And even the legends don’t believe it anymore.”

I truly believe this is a book that any two people can read and have both readers come away with completely different experiences. Now, the same thing can be said with other books, but this one feels different. I know the law of averages says it’s possible, but I don’t think it’s probable. So do yourself a favor, go out and pick up American Gods by Neil Gaiman and if the back cover didn’t push you over the edge to crack it open, maybe this has.

Read the Secret File of technical information and quotes from American Gods by Neil Gaiman.

Good clothes open many doors. Go Shopping.
Fame and fortune are coming your way.
The path of life shall lead upwards for you.
More Fortunes >