No Spoilers: Valerian and the City of a Thousand Planets didn’t “Bomb,” it just isn’t a Movie for “Everyone.”

50 years after the comic that it is named for was first published, Valerian and the City of a Thousand Planets hit theaters in 2017. The French comic finally has a film to call its own after influencing story, concepts, and designs in Independence Day, Conan the Barbarian, and Star Wars.

Valerian was beautiful, it was fun and engaging, well-written, and one of the best science fiction franchise starters I have seen that would be in the running to if not compete with, then share space with Star Wars and Star Trek.

I’m going to keep this spoiler free, but I hope that the box office “bombing” of Valerian doesn’t dissuade Luc Besson from continuing with the series, if someone is willing to put the money up for it. 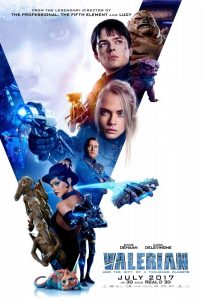 This is a film that 20 minutes in, I knew wasn’t going to be for “everyone” which is why Valerian appears to have bombed. But for those that truly “get” it, it is a work of art. And who’s supposed to “get” it? Besides the fanatical French public and other Europeans who have been reading the groundbreaking graphic novel Valérian (later Valérian: Spatio-Temporal Agent, and commonly Valérian and Laureline) by Pierre Christin and Jean-Claude Mézières.

Now, the comic was recently released in English, and I plan on enjoying them soon. But the intended audience, besides those who know the source material, are the ones who enjoyed Luc Besson’s other science fiction film (a modern cult classic if ever there was one), The Fifth Element. And The Fifth Element is based on one of the shorts from the 1981 animated classic “Heavy Metal,” which was based off of the magazine of the same name, which was derived from a French science-fantasy magazine Métal Hurlant which had debuted January 1975.

So what does this all have to do with the first 20 minutes of the movie and why I think it won’t be a film for “everyone?”

That’s easy. Those of us who grew up on Heavy Metal (in any form) or comics, or foreign films, know about storytelling in a different way. We know that things that are Americanized aren’t always better, and I can tell that although Besson had his characters speak English, the source material and the way the story moves is very European, and won’t strike a chord with the average American moviegoer.

That’s not a slight, it’s just that this film requires a certain palette. It’s a great film, but it’s not for everyone, which I said earlier but is worth repeating, because it is an amazing film.

Remember earlier when I mentioned that The Fifth Element is a modern cult classic? Yeah, I don’t know how more people don’t a) know about that film and b) love that film as I do. And that’s not just because it’s a Besson picture. The Transporter films that he did translated well, it’s just that the source material still dictates much of a film. If you’re honoring the source material, and knowing where the source comes from, and how sacred the source material was to Besson, makes me believe that this great movie will go misunderstood and underappreciated, despite the fact that it did what it set out to do, and it was a brilliant film. 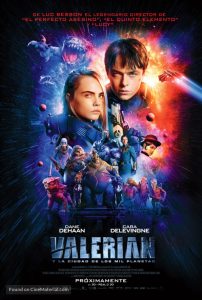 Why was it brilliant?

Dane DeHaan (Major Valerian) and Cara Delevingne (Sergeant Laureline) have a solid chemistry that should last far beyond the first movie, if indeed the franchise continues. Clive Owen, Rihanna, Ethan Hawke, and Herbie Hancock are well cast, in that their characters are not overshadowed by the person playing them. And despite John Goodman not following suit (I think I’d know his voice anywhere), it works anyway.

The visual style is Luc Besson. It’s design, an updated reprise of The Fifth Element; the colors, the textures, the designs, the angles, it’s all there, and it feels similar yet not the same.

The story moves by at a fast enough clip, that the 2 hours and 17 minutes don’t seem like much more than an hour or so. This is one of the few movies I’ve seen recently that tops two hours and doesn’t feel like it.

And at that it is extremely successful, despite what the box office and the critics say. I still maintain you will either love this movie or you won’t. There is no in between.

Read the Secret File of technical information and quotes from Valerian and the City of a Thousand Planets.

Good clothes open many doors. Go Shopping.
Let’s finish this up now, someone is waiting for you on that.
Nothing in the world can take the place of persistence.
More Fortunes >