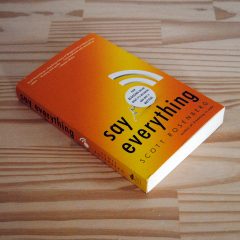 “The web implicity invited people to say anything–and everything.”

This is one of the most impactful lines within “Say Everything” that is stated early and often within its pages by author Scott Rosenberg.

The book may not be the end all be all of the history of blogging, but it is the most complete work on the subject to date. And for those of use who utilize the medium, I feel it’s important to know on whose shoulders we’re standing, which is why I picked up the book in the first place.

From the early pioneers to the rise of blogging to the Journalist vs. Blogger debate, Rosenberg thoroughly covers a lot of ground.

As Rosenberg writes; “Blogging, the first form of social media to be widely adopted beyond the world of technology enthusiasts, gave us a template for all other forms that would follow.” And if you look at Social Media as we know it today, he’s not wrong, though arguments can be made that the paradigm shift of the web as a medium is shifting away from words to video, audio, and images. The basis is still the same: We all have something to say, and the internet at large gives us ample opportunity to say it as we wish.

It’s interesting in hindsight to read about what Justin Hall described as the “Prodigious Personal Publishing Potential,” of the Web’s Utopian fervor, although blogging isn’t without its faults.

The rise of blogging, the different kinds, and the construction of commenting has forever changed the landscape of the Web as it once was. And the idea that blogging has changed our publishing narrative, from filtering the content first and then publishing it through traditional media channels like print publications and television, to publishing it as we wish and then filtering. 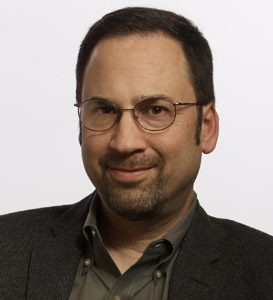 But for all the false starts and breakthroughs, the current internet landscape of trolls and lack of accuracy and partisan rants has deep roots connected to the rise of blogging, and that puts some perspective on how we arrived at this time and this place.

Yet despite all of this, here and now in 2018, reading this book after starting a blog well after Rosenberg published the first print run of his history of blogging in 2009, I’ve heard nothing but the imminent end of blogging is nigh since I started posting my thoughts on the internet, right here where you are reading this.

However, I am enduring, and in reading Rosenberg’s book, I believe that blogging will continue to endure. Sure, other mediums are vastly starting to become the new, new, form of online expression, with podcasts for audio and YouTube for video, but the written word still isn’t going anywhere.

And that is a constant within Rosenberg’s text; blogging isn’t for everyone, or it won’t last. But it has. Will it remain so forever? I don’t know. But for the foreseeable future, based upon my existing knowledge and the knowledge I gained from “Say Everything” I believe it’s here to stay.

If you have your own blog, I urge you to read about the trials and tribulations of those who have come before us. But I will admit, I’m not sure this is a book for someone to read before they start a blog. For myself, it made me feel a connection to the history of blogging’s pioneers, but I don’t believe that would be the same if I had read this before I started publishing posts on this site.

Rosenberg did his homework, and he spoke to and was able to get quotes from a lot of those pioneers. The book is “conversational and compelling” to use the words of the Boston Globe, but for myself, and for any other early web adopters, it’s a trip down memory lane. 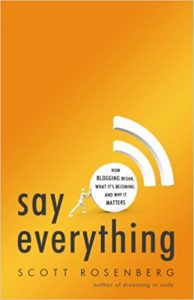 Say Everything by Scott Rosenberg

And before you start saying that a book published in 2009 about blogging has no relevance, Rosenberg has continued the history on SayEverything.com with a Postscript written in 2010. And perhaps more to come.

My final takeaway from this book, as cliche as it might be, is the more things change the more they stay the same. Despite emerging technologies and new platforms to publish and have discourse on the web, the arguments about relevance, or expertise, or commenting seems to be the same or extremely similar to as it was. And in that regard, this is more than a read for bloggers, but a great read for anyone publishing anything online, within any form of media be it audio, video, images, or just plain old fashioned text.

As some of you who have been following along may have noticed, I’ve dug into quite a few books about the history and origins of technology and the internet, and this was just another step along that path. But it’s one I’m happy to have taken. And for that, I owe a hat tip to Brian McCullough of the Internet History Podcast for recommending “Say Everything” to me in the first place.

In turn, I am recommending it to all of you. Happy reading!

Read the Secret File of technical information and quotes from “Say Everything: How Blogging Began, What It’s Becoming, and Why It Matters” by Scott Rosenberg.

A difference, to be a difference, must make a difference.
Today it’s okay to make a few choices by going with your instincts.
Even the greatest of whales is helpless in the middle of a desert.
More Fortunes >