Lessons Learned from Fantasy: A Spoiler Free Review of The Talismans of Shannara

The Talismans of Shannara is the final chapter in the four-part Heritage of Shannara series. And accordingly, it concludes the various storylines that have appeared (and were not concluded) in the previous novels: The Scions, The Druid, and The Elf Queen.

The Ohmsfords; Par, Coll, Wren, and Walker Boh, Morgan Leah, Padishar Creel, Cogline, Damson, Tiger Ty, Rimmer Dall, and a host of other characters from the previous books all converge upon this conclusion to the series, as well as some new characters. 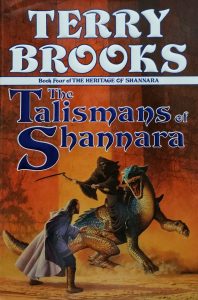 Since the charges the shade of the Druid Allanon gave the party of Ohmsfords and others at the Hadeshorn, each character has wrestled with internal and external demons, too many questions and not enough answers, as well as their own individual narratives which at times overlap.

This conclusion of the series is the culmination that everything in the prior books was building towards. It is the reason that you start after that first book. And while I started with the original Sword of Shannara trilogy, I can suggest you start there but you don’t have to.

It is with a slight hesitation that some of us finish books like this. As with the original trilogy that took place some 300 years before the events of the Heritage series, I know that when I embark upon the next series I will have to do so by saying hi to new characters and with the close of this book, I have said goodbye to these ones whom I have come to care a great deal about.

And I have come to care about them because their struggles are similar to ours, even though I don’t face the chance encounter with a true demon as they have. Their inner demons and the lessons that Terry Brooks portrays through them is our great connection to them.

Lessons that when distilled down, work for the characters of a fantasy novel and for us as the readers of those words as well. 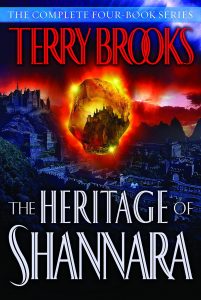 The thing about the Shannara series and I’m only seven books in at this point, is that Brooks takes the time for us to really feel for the characters and learn from their struggles both internal and external.

And for that reason, I give Terry Brooks praise. The original Sword of Shannara trilogy was quite an accomplishment, and the four books of the Heritage of Shannara series are a welcome return to the world he wove so intricately the first time around, making it larger and smaller at the same time.

Give the books of Shannara a chance. You won’t be let down, especially if you enjoy fantasy, because Brooks is a master of fantasy.

Read the Secret File of technical information and quotes from The Talismans of Shannara.

Your moods signal a period of change.
The path of life shall lead upwards for you.
Fame and fortune are coming your way.
More Fortunes >