So here are the most recent pieces I’ve found that I’d like to share, of some of my favorite fandoms. 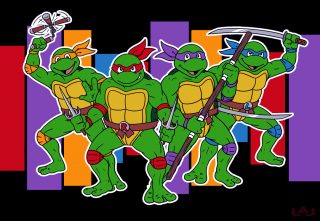 Probably one of the first fandoms I really claimed as my own. I watched this show as much as possible, on TV, VHS, and had a massive collection I regret giving up to this day including the van. But the memories still exist and while I gave the newer Turtles a chance, the OG animation and the first live-action film are where it’s at for me… I was too young for the comics, but when I was old enough to know better, I sought them out.

But as a nostalgia factor, the first animation will always have a place on any screen of mine. 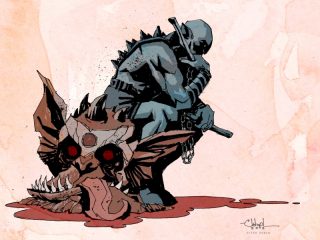 While all of the fandoms in this post have never really left my heart, only one came back as a daily part of my life after it had gone away the first time. I do not remember when ThunderCats stopped being a huge part of my young life but I would guess some time around 11 or 12.

Then just five years later as a freshman in college, a group of us would gather to watch Cartoon Network’s 4 to 5 pm hour of ThunderCats in syndication after our last classes, as we waited for the dining room to open. On any given weekday there would be at least four of us in a room watching these shows, and no, we weren’t doing it ironically. 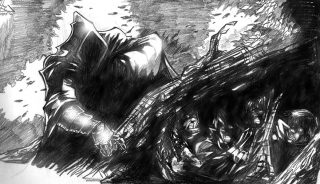 Lord of the Rings by Deevious Genius

Lord of the Rings

I remember being that kid… I read the books before 7th Grade, and the few true “geeks” that I hung around had also read these books around that time, all on our own we came into the world of Middle Earth, but together we dissected and discussed like the geeks before us and after.

At one time it was the most prominent fandom in my heart, and while it has faded, I still have a reverence for the books which opened up the world of fantasy to me. So I selected the one scene everyone universally pictures the same in their head, from reading the book to Bakshi to Jackson. 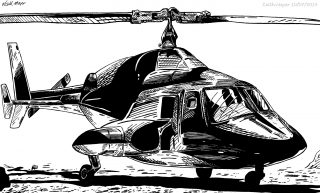 The 1980s created some of the most iconic greats in transportation; Dukes of Hazzard had the General Lee Charger, Knight Rider had Kitt, The A-Team had B.A.’s van, and though they are all cool, my head and my heart were in the clouds… My favorite was Airwolf.

Whether or not Airwolf was the better show, especially when compared to The A-Team and Knight Rider, which were basically similar shows, that is debatable, but as far as getting from place to place or just sheer firepower, Airwolf was probably the best option.

People really hate on The Phantom Menace. And perhaps they are correct, but I give the movie a pass because I can’t help but drift back to the wonder of “what will this film experience be?” and the optimism of standing in line for hours to get in for the midnight showing.

However, this painting would have saved us all some time, because it quite clearly established the cliff notes for the entire prequel trilogy. Anakin becomes Vader, and this painting is beautiful.

The Marvel Cinematic Universe had a big bang and it was Iron Man. From there the Universe expanded, but Tony Stark has remained the Alpha for me. I know others have been placed above him, some prefer Captain America, Thor, Black Panther, or Spider-Man, but for me, Iron Man more closely related to my own faults.

And when we can relate to characters they become something else entirely. 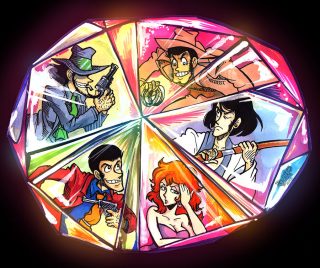 I really enjoy Lupin the Third… Subbed or dubbed, it doesn’t matter… Green, Red, Pink, or Blue jacket, I’ll watch them all. It started one early morning watching Adult Swim at 5 a.m. with a cup of coffee because I couldn’t sleep and I never looked back. It’s one of the few times I’ve been thankful for not sleeping. 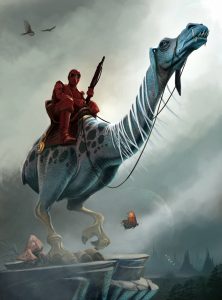 Necron 99 aka Peace
by moolik

Ralph Bakshi is an inspiration. If you’ve been reading this blog or happened upon any of the posts in my Ralph Bakshi Rotospective you know this. You also know this if you’re a listener of The Wicked Theory Podcast, where I have become a caricature of the fandom.

While that is all true, what is also true is that like finding any great artist, you really want to share it with other people, not to indoctrinate them, but just for them to get appreciation. This guy Peter gets it… And his Peace is just epic.

So there they are. They aren’t the only fandoms, but they are some of the more personally important ones. The artists’ interpretations of each of these fandoms mirror my own well, and I would attempt similar things if I had such artistic ability.

What are some representations of your favourite fandoms?

Things are turning for the bright side.
Sharing little joys offer great hope to others.
Look forward to great fortune and a new lease on life!
More Fortunes >