Len Deighton’s XPD is Full of Action, Danger and Suspense

XPD is a brilliant display of elements from prior books and it’s not a slow build. It’s yet another example of how in Deighton books, characters’ motivations have an impact on the direction of the plot equal to or more so than their actions.

“1979. A stolen World War II document is about to surface–galvanizing the most ruthless secret agents of Great Britain, America, Germany, and the Societ Union into a desperate battle of wits and violence. Because this document, if made public, would reveal England’s greatest, most closely guarded wartime secret: a clandestine meeting in June 1940 between Winston Churchill and Adolf Hitler to discuss the possibility of England’s surrender. For almost forty years, this secret has been considered so dangerous to the security of the realm that anyone who learns of it must die, his file stamped XPD: Expedient Demise….”

XPD has elements of the unnamed spy series with Boyd Stuart being in the employ of the British Secret Service with those telltale Harry Palmer “insubordinate” tendencies while having the unmistakable intuition of a veteran agent. One clear example, which involves a conversation with Stuart’s commanding officer that I could hear Palmer stating:

“It’s all important,” said Stuart angrily. “When was the last time a field agent was briefed to take his time? All the dockets in the traffic room are red ones. Where are the stickers that say ‘Take your time’ or ‘Watch out for your back–this is just something to buy promotion for some London desk man’? Where are they?”

XPD also borrows from SS-GB in going through some potential “alternate histories,” as well as elements from Close Up of Hollywood and making motion pictures.

But I don’t want to mislead you that Stuart is the main character. There really isn’t one main character in this book. There are agents and individuals from all sides and some sides have multiple agents working towards different goals. There are three kinds of individuals involved in this book; those who know these “Hitler Minutes” as they’re known in the book do in fact exist, including their whereabouts. Those who are looking for these Hitler minutes that want them destroyed, and those who are out there that want them to be released.

There are some great generalizations along the way as well; 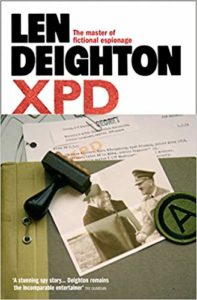 And remember, this book was released in 1981 and set in 1979. So the relevance is perhaps because some generalizations have aged less poorly or may have been around much longer than we think.

It’s not a spoiler to say that at times, some of these characters don’t show their true motivations to the people they’re talking to, but that also keep their true motivations known from the reader, keeping open the possibility that you may be surprised. While mainly the book doesn’t disguise a ton of information, some of it is easy to overlook at times.

But don’t for a minute think that this book is all talk.

There’s plenty of action, danger, and suspense. Within XPD characters big and small all have some level of “game” which means that at any time in almost every situation, there is no obvious upper hand, just who plays the proper cards.

Read the Secret File of technical information and quotes from Len Deighton’s XPD.

Let’s finish this up now, someone is waiting for you on that.
Even the greatest of whales is helpless in the middle of a desert.
Good clothes open many doors. Go Shopping.
More Fortunes >