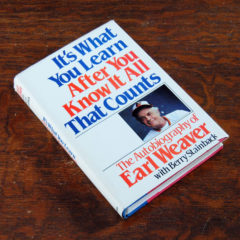 Over the years baseball has changed. On the diamond, in the dugout, and off the field as well. And there are a ton of things in this book that emphasize that point, but this book is more than baseball, it’s Earl Weaver. And then again, some things don’t change.

It’s pitching, defence, and the three-run home-run. It’s arguing with umpires, tearing up rulebooks, and “debates” with your own players and management.

The book starts out with two sentiments that are hard to argue. “Writers have often found Earl Weaver to be a most complex and controversial individual.” And “Aggressiveness and positive thinking are keystones of Earl Weaver.” This book proves both mostly in his own words.

Earl Weaver has an earnest truthful nature. He did everything he could to win without cheating. He looked into psychology to reach his players better, even hypnosis at one point. Any legal edge he could get, he went after.

What made Weaver’s teams win so much that he became the Earl of Baltimore? According to The Earl, “Many of the most successful managers had been mediocre ballplayers like myself because those of us with limited abilities had to think more and play smart baseball to sustain a professional playing career on any level.”

And it’s hard to argue against that, because we see that in every sport not just baseball. But that doesn’t mean he going to reach everyone of his players with his higher baseball IQ. 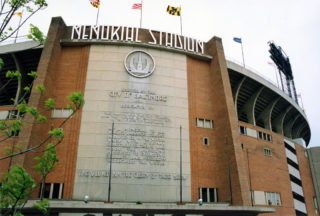 “No matter how much they tried, there were aspects of the game they would never learn and there were plays they could never make. I worked trying to correct these weaknesses, but in many cases I discovered I simply had to manage around them. The key was never to ask them to do what they could not do–only what they could do.“

I guess that hasn’t really changed either, and while we’re on things that don’t change, managers still argue with umpires. And while Weaver had some epic and memorable run-ins with them both at Memorial Stadium and on the road, he is diplomatic in his introduction to the “about umpires” chapter in this book writing:

I feel obliged to point out that an umpiring crew makes approximately 300 calls per nine-inning game. As I had managed over 2,000 major-league games, I have witnessed more than 600,000 calls. The fact that in this section I’d find fault with only a minuscule percentage of those calls testifies to the splendid job that umpires do overall. It is amazing.
Nevertheless, the names of some of the umpires have been changed or withheld to protect the guilty.

One other thing besides all the history, and some of the stories that I’ll still talk about, is that this book has a copyright of 1982, which is the last year he consecutively managed the O’s before he came back for a small stint after retirement, to replace his predecessor who won with the team he left him in 1983, and then fell out of contention with thereafter. But those stories aren’t in this book, which is a shame, and yet not. 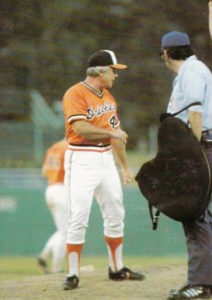 Due to when the book was released I learned a ton about Weaver I didn’t know. I learned how he grew up, his career path as a player and as a manager. And in fairness, I know he moved Ripken Jr from third to short. I know he came back to help the club that was just not the same. And I know, from reading this book, that he didn’t harbor any ill will at Altobelli or the team in 83 that won.

But aside from managing 4 20 game winners in a season, and many many more over his career, he helped his pitchers with Cy Young award after Cy Young and managed personalities like Boog Powell, Brooks and Frank Robinson, Jim Palmer, Tippy Martinez, Rick Dempsey, and many more names that mean much more to me and Baltimore fans, than anywhere else outside of the Beltway.

I mean, I know about the history of the Orioles, as they are my favorite baseball team and growing up they were my favorite team period, but to get to hear these stories from before my time on earth from an in the dugout perspective is almost mind-blowing!

Weaver was fair and did spur the introduction of statistics into the dugout, but it is Frank Robinson who has some of the best and more realistic quotes about his old manager.

Frank has two very poignant quotes about his old manager:

“Nobody can chew you like Earl can chew you, and it’s plenty tough to take. But the instant it’s over, it’s forgotten. The man never carries a grudge. He does the best job of any manager I’ve ever seen at keeping twenty-five ballplayers relatively happy.” 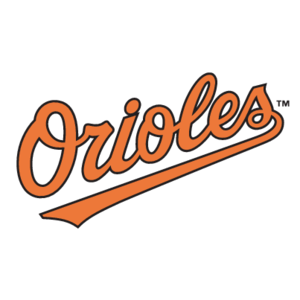 “The Orioles are amazing… A lot of clubs sit down at the end of spring training, pick the twenty-five best athletes, and head north. Here they sit down and look for the right mix, and they do it in detail like no other ball club I’ve ever seen. It’s not just the best athletes or the best starting nine. It’s who can do the best job of sitting on the bench for a week, then go up and get a hit? Who can steal a base as a pinch runner in the late innings? Who can play more than one position if someone gets injured? Nobody in baseball can put all those elements together better than Earl Weaver because nobody can judge baseball talent as well as he can.”

Those two quotes sum up the experience of most of Weaver’s former players.

It’s not all praise and look at me, as there are some genuinely fun moments. The most iconic seems to be this scene in the clubhouse after a game with Palmer and Weaver dubbed as “The Odd Couple.”

The reporters drifted off and Jim Palmer sat down next to Weaver. “Jeez, Dempsey’s really down, Earl,” he said. “Why don’t you have a talk with him.”
“Dempsey pays as much attention when I talk to him as you do,” Weaver said.
“What do you mean? You talked to me after I volunteered to go to the bullpen, and since then I’ve pitched three good games.”
“But did you pay any attention to me?” Weaver asked.
“No,” Palmer said, and they both laughed.

And speaking of Rick Dempsey, Weaver has some incidents with him, but in his own book Weaver gets the last word and to that end, this was pretty enjoyable as a last word:

Oh, was he stubborn! I tried to point out to Rick some fundamental truths. A manager manages. A pitcher pitches. And a catcher receives. We had a big fight on this subject. “Rick, a catcher catches the ball,” I said. “When you’re given more responsibility, we’ll change the title. We’ll call you an executive receiving engineer or something.”

“When all is said and done, all I want anyone to say about me is, ‘Earl Weaver–he sure was a good sore loser.’” 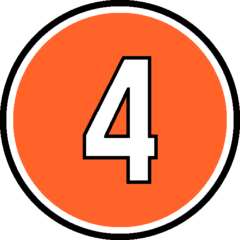 Earl, you were much more than that. But I want to conclude with something from Earl himself, because that is how it should be.

“Managers are always learning,” Earl Weaver concluded, “and mostly we learn from our mistakes. That’s why I keep a list of my mistakes at home for reference. I used to carry the list around in my pants pocket, but I finally had to stop. It gave me a limp.”

Cheers to you, The Earl of Baltimore, Earl Weaver. And cheers to this book, which was as fun as taking in a baseball game on a perfect lazy summer evening.

Read the Secret File of technical information and quotes from It’s What You Learn After You Know It All That Counts: The Autobiography of Earl Weaver.

Things are turning for the bright side.
A difference, to be a difference, must make a difference.
Let’s finish this up now, someone is waiting for you on that.
More Fortunes >